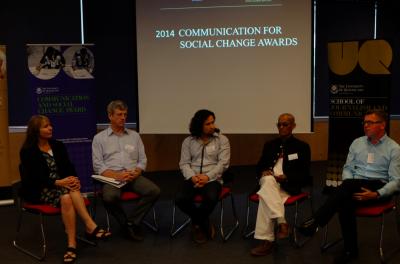 Presenting the issues in Sarawak to members of the school.

Radio Free Sarawak was honoured Tuesday at Australia’s University of Queensland in Brisbane with the 2014Communication for Social Change Award.

Only one organisation wins this prestigious award for excellence in communication each year and RFS was delighted to pick up the title from a strong field of candidate projects, working on providing communication tools for disadvantaged people across the world.

The winner of the individual category was the Afghan photo-journalist and refugee Barat Ali Batoor, who had documented his harrowing journey as an asylum seeker travelling through Malaysia and Indonesia to reach Australia.

Describing the work of RFS, the university’s Centre for Communication for Social Change explained:

Radio Free Sarawak (RFS) uses a combination of ICTs and shortwave technology to bring critical media perspectives to extremely isolated rural indigenous communities in the Eastern Malaysian state of Sarawak, and also allows these communities to engage via phone-in practices, in order to inform, empower, and educate these communities about their human and media rights. 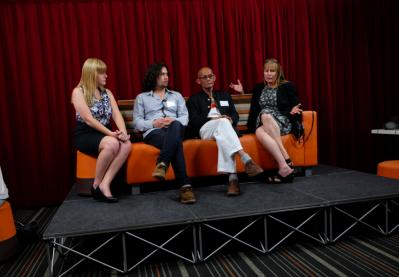 Captured on TV by the Centre’s journalism students.

The station’s founder Clare Rewcastle Brown and initial DJ Peter John Jaban (known as Papa Orang Utan to listeners) were invited to Brisbane to receive the award and meet with the academic leaders of the school, including Professor Pradip Thomas, who officiated the event.

The prize money will be spent on increasing the distribution of radio receivers in isolated areas.

Speaking at the event Peter John Jaban told the story of his own family and Dayak community who have seen their lands and livelihoods taken over the past few decades without consultation.

He explained that he had named himself after the orang utan, because, like them, he felt he and his people are an endangered species.

Clare Rewcastle pointed out that the award comes just days after her blog Sarawak Report exposed one of the key personalities behind the current relentless jamming against the radio station, which has caused a wave of anguish and frustration amongst listeners who have complained for weeks that it has become increasingly difficult to tune into the show. 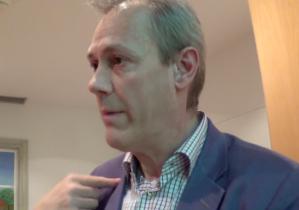 Sarawak Report had confronted the broadcast broker and telecommunications equipment dealer Ludo Maes in Brussels before travelling to Brisbane with evidence that he has been responsible for jamming the station.

Maes was also recorded agreeing to sell deliberate jamming equipment to a fictitious African country, after being told the client was wanting to jam another radio station on behalf of the government there.

He had said that the practice was illegal, but then proceeded to offer to provide the equipment (if paid up front) and to “project manage” the operation to help make sure it was as effective as possible in achieving the intended purpose.

The team from Radio Free Sarawak made clear that they will fight back in whatever way they can against the increasingly effective jamming, because it is the acknowledged human right of the native communities of Sarawak to receive alternative information to government propaganda and to have a platform on which they can air their own grievances.

Clare Rewcastle thanked the University for their recognition, not just because of the honour of the award, but because the credibility offered by international institutions has provided an important support in the face of extensive vilification and attacks by Taib Mahmud and other BN politicians in Sarawak.

“There have been furious denunciations by ministers and by Taib himself.  He branded us the ‘Naughty Radio Station’ and we have been frequently accused of poisoning and confusing the minds of ‘simple’ Dayak people.  We have been accused of sedition and subversion and of undermining the harmony between races and religions – all of which can be translated into criminal charges in Malaysia, where the clamp down is in full swing against pro-democracy forces after the opposition won a majority of votes (if not seats) at the last election.

We are currently subject to relentless and expensive jamming.

I myself was personally accused in Parliament by the Chief Minister himself of being behind a wicked attempt at neo-colonialism in order to capture Sarawak’s oil wealth for myself – using not gunboats this time, it appears, but a small two hours shortwave broadcast.

And I am of course banned from entering Sarawak, the country where I was born.”

The award comes on the heels of the International Press Institute’s award of their 2013 Pioneer of Press Freedom Award and just a few weeks ago DJ Peter John Jaban was recognised by the French based NGO Reporters Without Borders as one of the world’s 100 Heroes of Media Freedom.