Lifting The Lid On 1MDB - Latest Expose Is From DAP 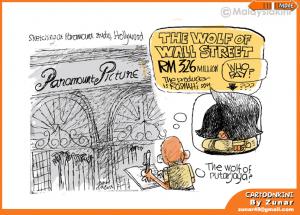 Wolf of Putrajaya? 1MDB and related antics have become a national talking point, owing to the misconduct of the fund

Today, DAP’s Tony Pua released a further set of revelations about yet another of this outfit’s multi-billion dollar loans, where the money once again appears to have disappeared into thin air.

The vehicle on this occasion is a company called SRC International Sdn Bhd, which was set up by 1MDB and then promptly borrowed RM4billion, guaranteed of course by the Federal Government.

Pua suggests that the dubious nature of this borrowing and the lack of clarity as to what happened to the money next, appears to have been responsible for the failure by 1MDB to persuade accountants KPMG to sign off its Annual Accounts due in March 2013.

KPMG subsequently resigned from its role as accountant to 1MDB to be eventually replaced by Deloittes, who put in the 2013 accounts over a year late for this multi-billion ringgit public enterprise chaired by Najib Razak.

The DAP MP points out that by this time SRC had been taken off the books of 1MDB and acquired instead by the Finance Ministry, which now ‘owns’ this mysterious private company and its loan guaranteed by the government. 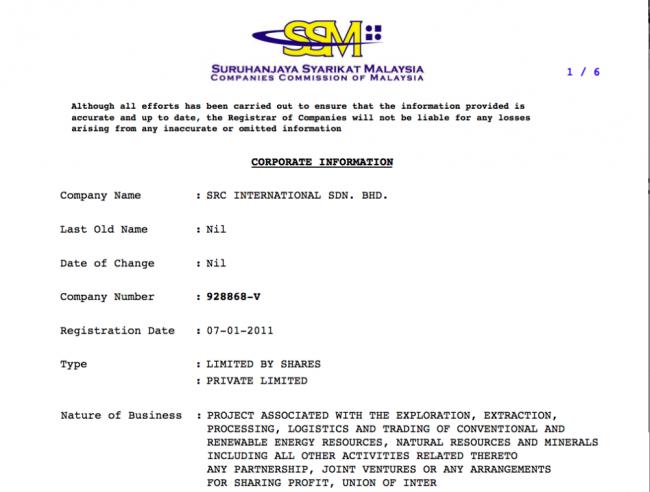 Catch all purpose, but no public accounts.

The problem is that still no one knows what has happened to this RM4billion loan, because SRC Sdn Bhd has yet to submit its own accounts for 2013.  No way to conduct a publicly owned company, surely?

“Without transparent answers from the Government, and given the suspicious circumstances, we can only speculate that there may have been some serious financial breach or misappropriation of the RM4 billion loan to SRC which cannot be reflected in the consolidated accounts of 1MDB….

The multi-billion ringgit question is what has happened to the RM4 billion since March 2012? Dato’ Seri Najib Razak, who is both the Finance and Prime Minister, as well as the Chairman of 1MDB, must answer this question” [statement by Tony Pua]

The one common factor in all these murky goings on, as Pua points out, is the Prime Minister Najib Razak.  After all, Razak is both Chairman of 1MDB, which off loaded SRC International and the Finance Minister, who then took over the company.

So, he should know the answers!

Which is why Pua is asking Razak for an explanation – to be faced, as usual it seems, with a deafening silence.

Perhaps, as the cartoonists are starting to suggest, Pua should instead be turning to Najib’s wife Rosmah for some of the answers? 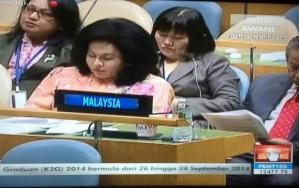 All powerful ‘First Lady’. Rosmah sits in for Malaysia during Najib’s UN speech!

After all, she seems to form a key link in a chain that clearly connects 1MDB; its chief ‘advisor’ Jho Low; key investors like Abu Dhabi’s Aabar fund and the multi-million dollar support for outfits such as Red Granite, the Hollywood producer of Wolf of Wall Street, which is owned by her son Riza Aziz.

Malaysia’s ‘First Lady’ can hardly complain about such speculation, when so much untoward activity surrounds her husband’s management of this fund.

The whole point of annual accounts and proper auditing, after all, is to prove that the public’s money is being handled honestly.

Yet, her husband, whom she dominates, is breaking all these rules.

For these reasons straight questions are the duty of MPs like Pua, while the public are entitled to suggest that two and two might just equal four, unless otherwise informed. 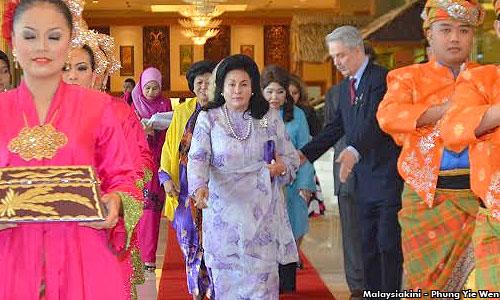 Rosmah plays royalty in Washington – is she the missing link in 1MDB?

SRC International Sdn Bhd, a wholly-owned Ministry of Finance subsidiary’s failure to submit its annual accounts on a timely basis despite a RM4 billion loan from Kumpulan Wang Amanah Persaraan (KWAP) guaranteed by the Federal Government smells of fishy business.

SRC International Sdn Bhd is an anonymous-sounding company owned by the Ministry of Finance. However, a peek into the company’s short history and balance sheet raises plenty of suspicion-arousing question marks.

SRC International had secured a RM4 billion Islamic loan from Kumpulan Wang Amanah Persaraan (KWAP) which was guaranteed by the Federal Government. The loan bears a profit rate of 4.65% for the first 3 years and a profit rate equivalent to Malaysian Government Securities profit rate plus 0.7% for the remaining tenure. The loan was disbursed in two tranches in August 2011 and March 2012.

Despite the size of the loan and entity, the financial accounts of SRC International was last filed for the year ending March 2012. The accounts for March 2013 which were due by September 2013 have not been submitted.

The question is, why is it so difficult for a company with hardly any activity other than a mega-loan submit its financial statements to the authorities? I had asked this question in Parliament and received a response from the Finance Minister on Tuesday, 14th October.

There was however no reasons given for the delay, other than to say that the financial statements for both March 2013 and 2014 will be submitted before the end of October.

What was more curious in the answer provided was the fact that the Finance Minister could not be remotely specific about what business SRC International was involved in. All he could describe was

The long-winded description will leave readers scratching their heads as what is so secretive about SRC.

More suspiciously, SRC was hastily acquired from 1Malaysia Development Bhd (1MDB) before the end of March 2013 a year after the RM4 billion was fully disbursed and immediately before the accounts for 1MDB were closed for the period.

Without transparent answers from the Government, and given the suspicious circumstances, we can only speculate that there may have been some serious financial breach or misappropriation of the RM4 billion loan to SRC which cannot be reflected in the consolidated accounts of 1MDB. This could also have caused the delays in the submission of 1MDB’s March 2013 accounts as well as the resignation of 1MDB’s auditors, KPMG Malaysia then. To resolve this conumdrum, MoF “acquired” SRC so that problems in SRC will not be reflected in 1MDB’s books. However, as the problems in SRC remains, the company unable to submit its financial accounts since March 2012.

Jose Barrock has reported on FZ.com earlier in May this year that the March 2012 accounts showed that SRC had invested RM2 billion in a unit trust investment managed by AmInvestment Services Bhd which paid a dividend income of less than 0.01% and another RM1.7 billion in short term deposits.

The multi-billion ringgit question is what has happened to the RM4 billion since March 2012? Dato’ Seri Najib Razak, who is both the Finance and Prime Minister, as well as the Chairman of 1MDB, must answer this question.

The sheer lack of governance, transparency and accountability from the wholly-owned government corporation chaired by the Prime Minister himself is both shocking and disgraceful. Such scandalous behaviour certainly serves as a terrible example to all other government agencies.