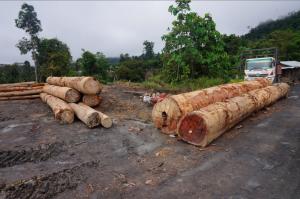 As NGOs protested to the United Nations today over the Sarawak State Government’s strong arm tactics against peaceful protestors at Baram, Sarawak Report can reveal that the police and officials who broke down the barricade were supported by illegal loggers.

Over 50 armed police had chosen to conduct their raid at the most insensitive of moments, on the eve of the first anniversary of the Baram Dam blockade.

The blockade had been set up by native people to prevent the flooding of their homelands and to stop the attempts to start construction on the as yet unauthorised project.

The police were accompanied and aided by Forestry Department officials and also a gang of burly logging workers, employed by the company MM Golden Sdn Bhd, which is claiming the right to log the native customary land belonging to the local people. 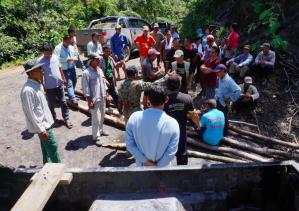 However, the local community, who dispute the logging concession, have now provided Sarawak Report with evidence that MM Golden has been raiding their territory for forbidden Tapang trees, which have been illegally felled in large numbers in the area over past months.

Photographs taken by residents last May captured teams of bulldozers from the company destroying tracts of forest and particularly stealing the prized, but highly illegal, Tapang wood from the area.

And it means that the police and authorities have been using illegal loggers to enforce their strong arm tactics against the local people.

The revelation makes a mockery of the new chief minister’s claims that he is planning to end illegal logging in Sarawak, when in fact the Forestry Department has knowingly employed such a company to manhandle locals attempting to protect their native forest lands. 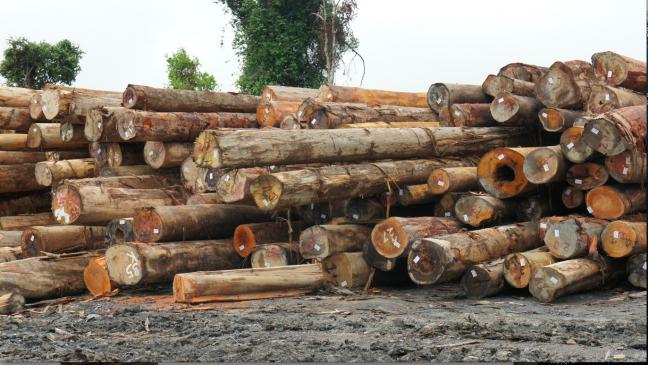 And another secret has also emerged from the incident in May, which is that MM Golden Sdn Bhd has clearly entered into a clandestine deal to build a construction road up to the as yet unauthorised dam construction site for Sarawak Energy, as part of their contested licence agreement.

One of the native activists who confronted the loggers in May told Sarawak Report:

In May people at the Baram Blockade KM15 site had detected the presence of MM Golden logging in NCR land not far from the junction with Long Keseh. However, when examined by residents MM Golden argued that they were permitted by the Forest Department to log in the area.  They used the the local term “Sweep Block” [Clear Fell]. But when the population investigated further and forced them to show their timber map, it was revealed that in addition to logging the company is tasked with building a road to the dam site.

Then on the morning of May 3, 2014, my colleagues and I from the site Blockade KM15 went to chase away the workers from MM Golden. But on the way there we took photos showing that the company have clearly have cut down Tapang Wood trees, the type that it is illegal to destroy in Sarawak.

By noon we were able to drive them out of the forest where they were logging. If I am not mistaken almost 10 pieces of heavy equipment for logging were successfully removed while the workers also pulled out of the logging sites.

The discovery that MM Golden’s timber licence includes clearing a major unauthorised road to the Baram Dam site has revealed that the state government has a second undisclosed and illegal agenda in allowing the timber company on to the native land. 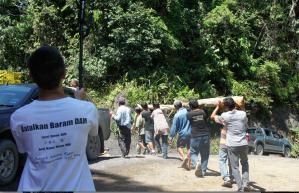 Setting up barricades and chasing out the loggers. Determined local action removed the bulldozers in May

It exposes how Taib and Sarawak Energy have seen fit to force through the controversial development, even though proper authorisation for the ex-Chief Minister’s pet project has yet to be obtained.

As JOAS President Thomas Jalong explained on today’s 365th day of the continuous Baram Blockade, there is still no legal basis for the dam.

Therefore there is no right on the part of the authorities or Sarawak Energy to attempt any such preparatory works or to start clearing native woodland areas:

“Sarawak Energy needs access to the area currently being defended by the villagers if they are to proceed with the proposed Baram Dam. Despite the fact that no social or environmental impact assessments for the proposed dam appear to have been approved, SEB is ready to jump into preparatory work” [NGO Joint Statement]

The thuggery surrounding Sarawak’s logging business in native areas has been well documented, as has the dubious nature of concessions such as the one handed to MM Golden, which was condemned today by the Swiss NGO BMF as unfounded.

However, the disgraceful attempts to clear Baram before the dam has received any legal go ahead and in the face of local opposition, appears to represent a new milestone, even for Governor Taib Mahmud, who has long acted in the belief that he is above the law. 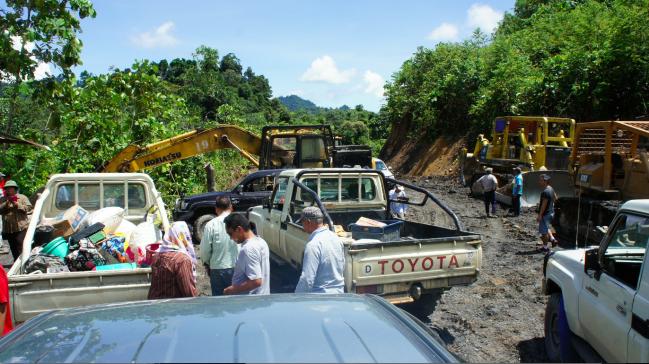 Determined local communities soon rebuilt a new barricade and re-instated their blockade in time for the anniversary date.

However, they are still being forced to legally contest the timber concession, which was handed out on Native Customary Land without notice or permission by the former Chief Minister and Planning Minister, Taib Mahmud. 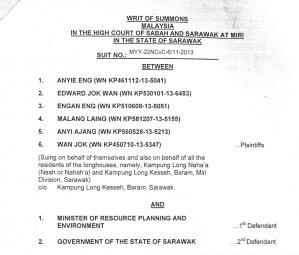 Hundreds of such timber licences are now before the Sarawak courts, because they were based on land statutes passed by Taib, which have subsequently been found to be unconstitutional by the Federal judges.

Despite numerous rulings, however, the state government has refused to amend Taib’s illegal statutes!

And, the concession to MM Golden, which was announced without consulting the local people (as legally required) straight after the election in July 2013, is a prime example of such unconstitutional behaviour.

Taib announced the concession on native land without warning or consent, justifying the move on the basis of laws passed by him, which have been ruled unconstitutional.

A legal case has now been filed by the local communities affected against the State Government and Taib, as the then Planning Minister, for violating their Native Customary rights by seizing their traditional recognised lands without notice or compensation. 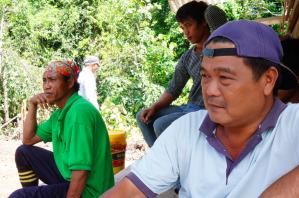 Fighting for their homelands – Baram’s natives are being dispossessed

So, who is in the right?

Is it the native communities, who are protecting their legal lands or the police and Forestry Officials, who are using illegal loggers to attack peaceful campsites?

And, is is a secret deal with a timber company to build a major construction road under the pretence of creating a timber trail a suitable or honourable action on the part of a supposedly law abiding and democratic state government?

This ham fisted and illegal aggression against the Baram communities on such a sensitive date has only advertised further to Malaysia and the world that the new chief minister remains a puppet, who is continuing the illegal and rapacious policies of his predecessor, the current governor Taib Mahmud.