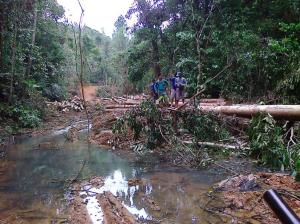 Indigenous landowners arrived at their forest to discover wood had been stolen.

A raft of foreign companies, many of whom tell their buyers that their wood is ‘sustainable’, stand warned today that these claims are impossible to verify and that their supplier the KTS owned Roundtree Group is linked to illegal logging complaints in Sarawak.

Sarawak Report has obtained copies of a number of police reports [1] [2] [3] that have been lodged against a KTS-linked company named Isotimber Sdn Bhd.

Isotimber has been illegally logging on native lands near Julau, thieving timber without permission.

Simultaneously, Sarawak Report has acquired a secret agreement made between Isotimber Sdn Bhd and two villagers, who illegally signed away NCR land in Julau for logging activities, including a map showing the area that has been logged by Isotimber.

Translations of the police reports reveal that on 3rd March, 2014 local landowner Thomas Anak Mandang lodged a complaint against the illegal loggers, calling for immediate compensation.

The report stated that Thomas and other villagers including one Tuai Rumah (village headman) from the region went to the area of Sungai Kemuing, Ulu Lijan in Julau on the 30th January 2014 and discovered that timber belonging to them from Sungai Sebuluh, Sungai Sebo, Sungai Sebayak and Sungai Sekerangan had been cut and stolen by Isotimber. 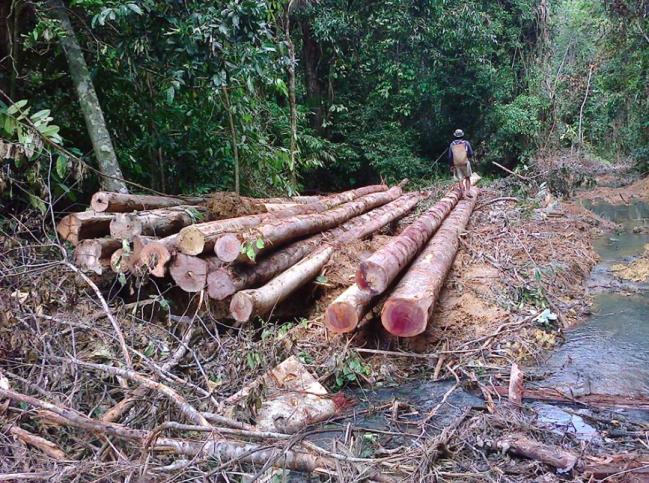 Illegally felled logs from the area – Piled up by Isotimber.

The report goes on to state that 4000 logs were piled up on the land and that it emerged that an agreement between Isotimber and two locals named Kasi Anak Janda and Bartholomew Busah Anak Janda had been made without the consent of the local landowners. 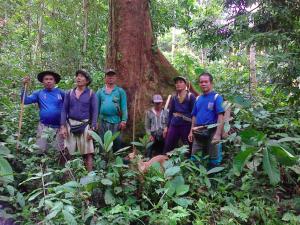 Native villagers are calling for an immediate end to the illegal logging and compensation from Isotimber.

It was only through a tussle between the landowners and one company representative that the villagers learnt of the agreement at all.

Research by Sarawak Report has uncovered the identity of Bartholomew Busah Anak Janda as a Supervisor of Sarawak Forestry.

Locals say that Kasi Anak Janda is a teacher from the area.

A translation of the agreement reveals that:

“Bartholomew and Kasi hereby solemnly give consent and permission to Isotimber to use the area that extends from Ng. Sedegum, Ulu Sungai Julau Kemuing Lijang that are in the area T/3188 Timber Licence to carry out logging and take all the logs until Isotimber leave and terminate logging in the area.” and that;

“Bartholemew and Kasi indeed give warranties and undertakings that:

(a) Not to do or cause any obstacles or disturbances to Isotimber from carrying out their logging peacefully,

(b) Without any delay, immediately solve any problems, disruption and chaos caused by other people in the area.

c) Will not make any claim for damages or compensation or payment and claims in connection with the dirty water that has been agreed.” 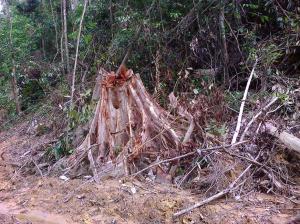 There is one major problem with the above commitments, state the local leaders, which is that neither of these two individuals are entitled to give them.

A further police report made on the 11th April 2014, details how villagers returned to their forest area and discovered timber owned by them had been “sloppily cut” and stolen by Isotimber.

The report states that a total of 568 logs were still left in the area but landowners cannot be sure how much timber was stolen in total.

A company search for Isotimber reveals that it is directed by John Lau Hui Siew, a KTS family member and director and shareholder of various KTS companies. Insiders have also revealed to us that director and major shareholder Wong Pak Cheng is a former KTS timber division employee.

KTS is one of Sarawak’s major crony logging companies and one of the major international exporters of wood from the state.

It is inconceivable that these individuals were unaware of the legal requirements for conducting business on native lands and therefore raises major concerns about the wider methods of this company, which has been responsible for the destruction of much of the rainforest in the state. 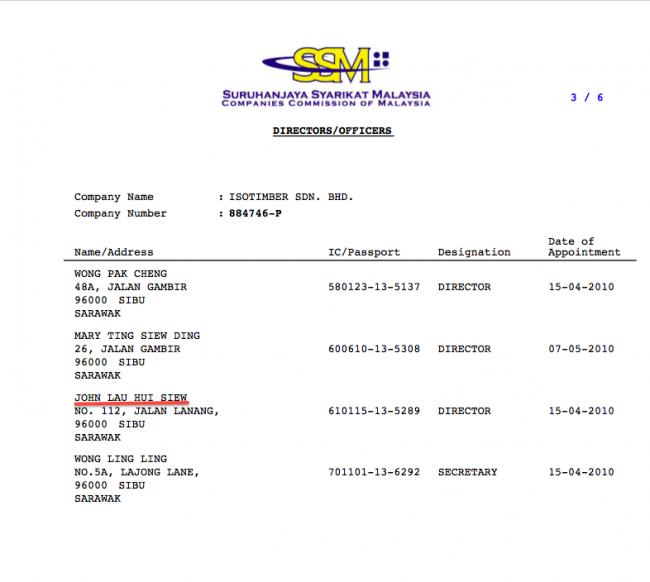 Roundtree Group proudly promote themselves on their website as “one of Sarawak’s leading timber industry companies” including business in logging, sawmill, moulding, veneer and plywood manufacturing, plantation, trading and shipping with over 10,000 employees. 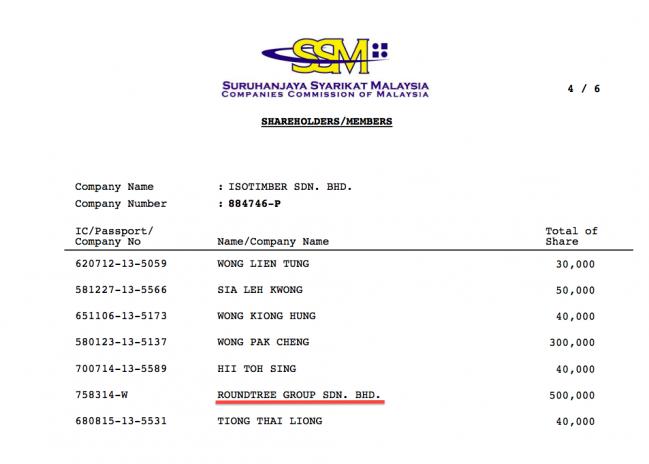 Roundtree have been taken to court in Sarawak on numerous occasions for logging on native lands. 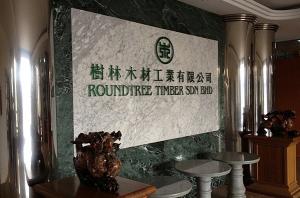 For example, in early 2006, villagers from Sebangan, found that Roundtree Timber had built a railway track over a part of their native lands causing serious damage to the environment and loss of timber and in 2011, natives from Sri Aman took Roundtree Timber to court for encroaching on their NCR land and won their case.

The website also reveals the directorship of Roundtree Group to be none other than a raft of KTS family members: John Lau Hui Siew, Peter Lau Hui Sing and Robert Lau Hui Yew.

Further company research proves that the KTS family also own the majority of the shares of Roundtree Group through a web of other companies (Vasty Development, Lagi Duta, United Greenview and Ritz Heights Development.)

This is usual practice for Sarawak’s timber tycoons who like to hide the extent of their shareholdings behind various shell companies.

Roundtree state that their products are sold to customers in over 30 countries including developed markets such as Japan, the U.S, the U.K, and other countries in Europe, as well as China, India and other countries in Asia. Independent research by Sarawak Report has uncovered wood from Roundtree Group is being exported to the likes of Australia, Canada and the United States.

In Australia, Roundtree Group has its very own company for importing its wood known as RT Group Timber Australia.  The website proudly boasts that they “support sustainability” and that the “main aim is to establish a good source of quality timber, direct from the mills of our parent company Roundtree Timber” 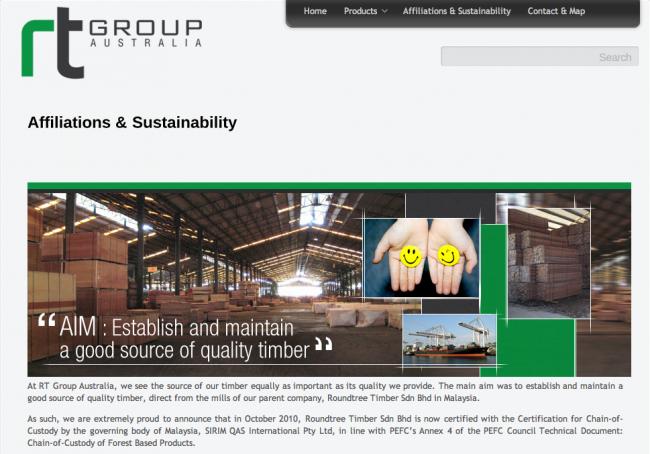 Branded sustainable wood by themselves and by the Malaysian Government

A company search for RT Group Australia PTY Ltd shows us that the company is currently registered at Level 1, 33 Queen Victoria Street, Freemantle, WA 6160 with the principle place of business being 4 Eliot Road, Armadale WA 6112. 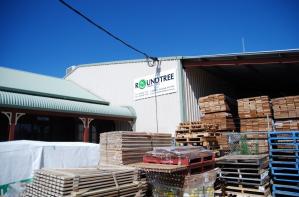 Sarawak Report has also come across another Roundtree company (Roundtree Timber and Lattice Pty Ltd) in Australia which is registered and operating from the same addresses.

Research by Sarawak Report has uncovered that Roundtree Timber & Lattice Pty Ltd is distributing wood to companies such as Sekit International as well as Lattice Makers Victoria. The sales/distribution address for Lattice Makers in WA is once again the same Roundtree address at 4 Eliot Road. Their range is also commonly found in all Bunnings, John Danks and Meter 10 stores throughout Western Australia.

Canada and the US

In Canada, P H Ventures Inc. are a trading floor that are importing wood from Roundtree companies Roundtree Timber Sdn Bhd and Perfect Trans Sdn Bhd from Malaysia and Woodywood Industries N.V. whose plant is operating in Paramaribo in Suriname, South America.

According to the website, P H Venture is importing species like “Meranti, Kapur, Keruing (Apitong), Alan Batu and Rubber Wood with logging volumes ranging from 500,000 to 650,000 cubic metres per year” from Roundtree Timber and “Rengas, Nyatoh, Sepetir, Kapur, Keruing, Alan Batu and Meranti” from Perfect Trans Plywood in Malaysia.

From its plant in Suriname, the annual production volume is approximately 120,000 M3 of “Bergi Gronfolo, Bolletri, Ingi red and yellow, Kimboto, Kwatagrtu and a small volume of Greenheart and Purple heart logs.” 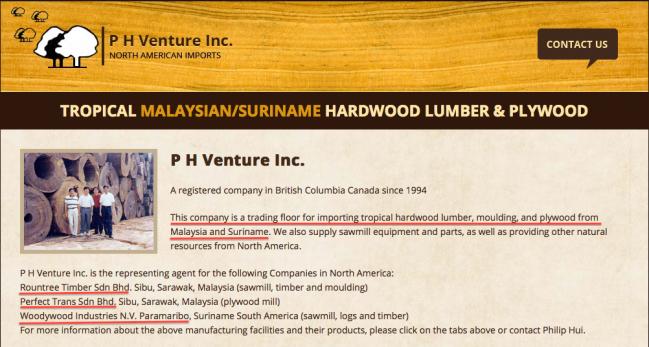 In the United States, we have discovered a number of other companies importing wood directly from Roundtree Timber in Sarawak.

Wood Brokerage International pride themselves on sustainable forestry practices and offer a wide range of FSC certified products but shipping records show that they have imported wood from the KTS family in July 2014. 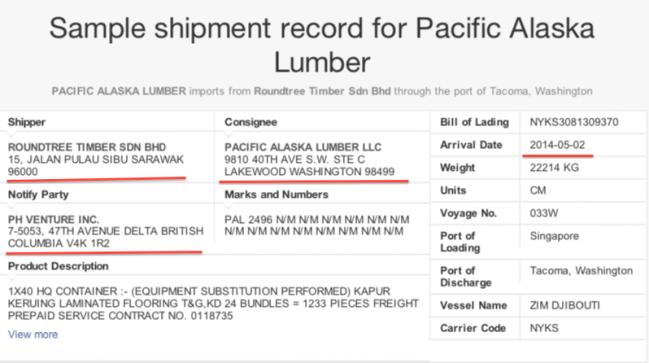 Pacific Alaska Lumber – Importing wood from Sarawak in May 2014

The website for Gallagher Lumber Co. declares itself the leading manufacturer and distributor for truck and body lumber parts in the West, stating that:

“The cost of our products and services continue to please our budget conscious customers.”

Rockland state on their website that their aim is to:

“conserve natural resources by partnering with companies that practice responsible forest management, recycle and reinvest a portion of their profits in reforestation programs.”

Rockland also state that they:

“have become one of “the most trusted names in trailer flooring”. 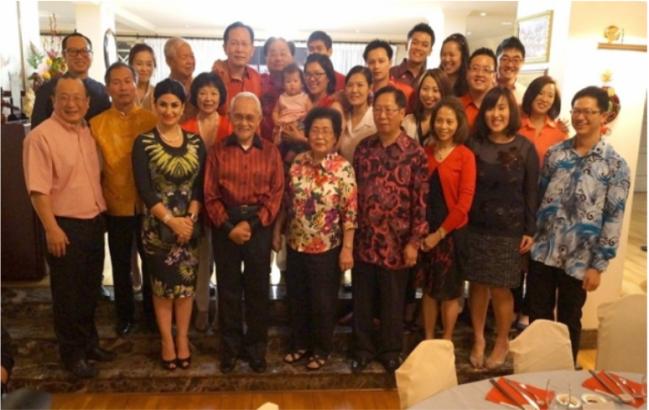 So why should International companies be wary of the KTS family?

Well, Sarawak Report can assure international buyers that it is saying nothing new by reporting that the Lau family are notorious in Sarawak for their dodgy logging practices and have been dragged through the native courts on numerous occasions for illegally logging NCR areas and violating the rights of Sarawak’s indigenous communities.

According to environmental reports, KTS have further investments in timber projects in the Yunnan and Sichuan provinces in China as well as the Amazon Basin in Brazil.

Foreign companies who assure their buyers that timber acquired from KTS is guaranteed to be sustainable, legal and environmentally friendly stand warned that they are in danger of being exposed for making false claims.