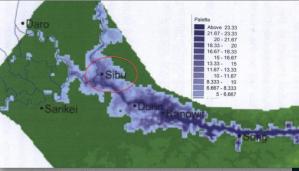 Flood of Biblical proportions as illustrated in SEB’s official report

This diagram illustrates the “catastrophic” consequences of a possible “cascading failure” of the Murum and Bakun Dams.

It comes from the official Environmental Impact Assessment report submitted to Sarawak Energy in 2008, but kept secret till now.

A wall of water travelling “at high speed” is shown as having inundated nearly three thousand square kilometres of the Rajang River basin, in a disaster of Biblical proportions.

It would hit Sibu within a few hours and wipe out everything in its path.  The waters would remain for several days, according to a series of official charts that detail an unfolding disaster in the event of a dam break.

The charts shows that even in Sibu the flood is calculated to be around 15 meters high and further up the Rajang river basin the wave is calculated at tens of meters in height.

The region is home to well over half a million people. 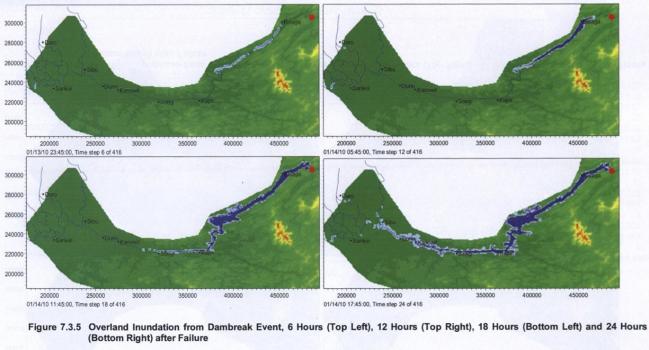 The first 12 hours, according to Section 7 page 31 of the covered up report (CLICK TO ENLARGE)

These diagrams are part of a series contained in the till now hidden Environmental Impact Assessment, which NGOs have long campaigned ought to have been made public.

They have rightfully pointed out that, according to the World Bank safeguards and all other standard protocols, Environmental Impact Assessments should be made public, so that the public understand the implications of major projects such as this.

Now. at last, Sarawak Report has obtained a copy: 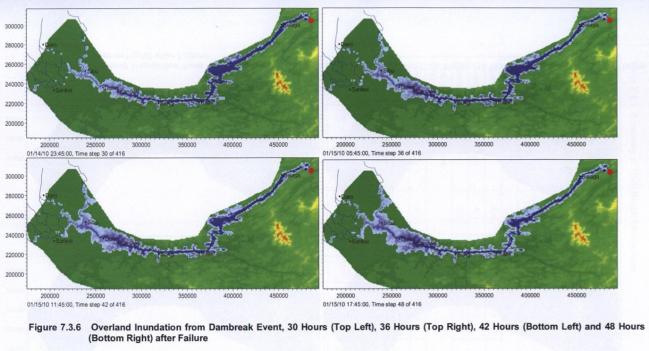 After 24 hours the Rajang River basin would be wiped out by a wall of water, bearing boulders and debris (CLICK TO ENLARGE)

Summing up the threat, which Sarawak Energy and the State Government clearly wished to keep secret, the official report says: 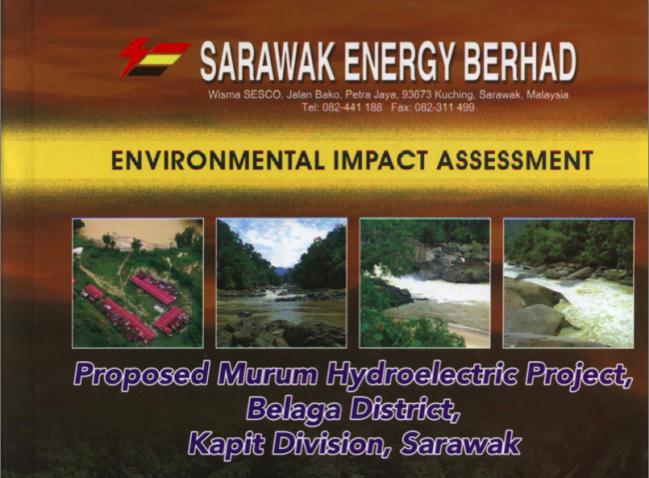 The EIA on Murum is a comprehensive and professional document, according to experts. 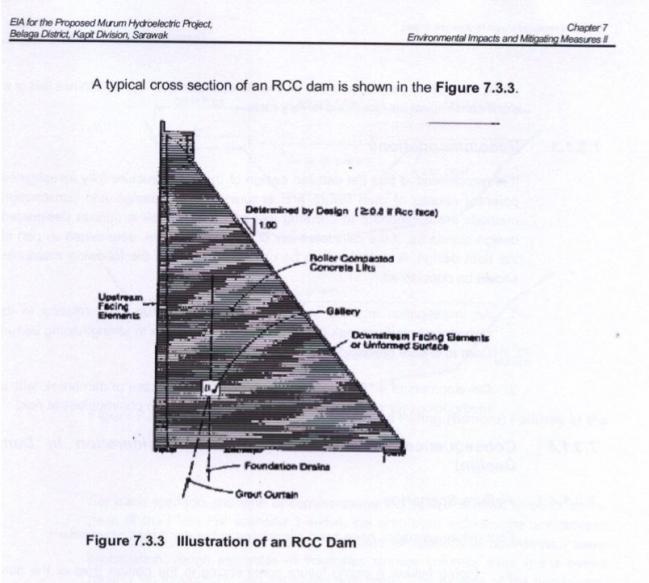 It was prepared by the Malaysian company Chemsain Konsultant Sdn Bhd back in 2008, but only after it was discovered that the then Chief Minister, Taib Mahmud and China’s Three Gorges Dam Company were already blasting tunnels through the rock face at the Murum Gorge.

What the EIA reveals is that the positioning of Murum Dam has added to the risk factors inherent in the Bakun Dam, which is the world’s second tallest rock filled dam.

Murum is located 70km directly uphill from Bakun and is linked by a narrow high gorge straight into the now flooded Bakun Lake, which crouches over one of Sarawak’s most densely populated areas – the whole Rajang River basin.

The matter is dealt with in Chapter 7 of the report, which Sarawak Report has now obtained in full. 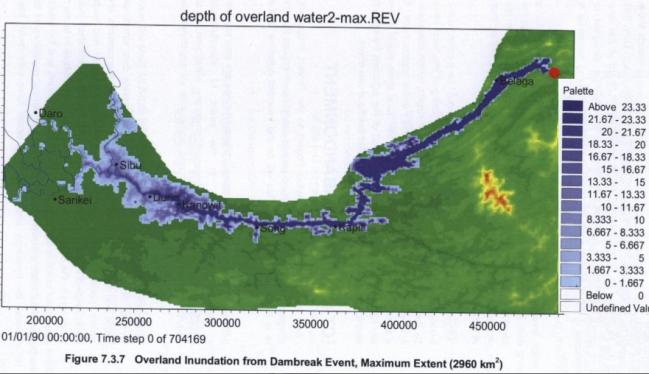 Although, the report points out that failures of these forms of Roller Compacted Concrete (RCC) dams “are expected to be very rare” it comes to a devastating conclusion about what would happen to Bakun if Murum Dam was to fail upstream:

“[Murum] Dam failure would create a flood wave which would propagate at high speed to the Bakun structure. The force contained in this wave may be sufficiently intense to cause structural damage as it strikes the Bakun Dam.  The model results show that a breach failure of Murum Dam will result in water levels at Bakun Dam that exceed the PMF design maximum water level and the crest height of the dam (232.8 m amsl). This suggests that the Bakun structure is not designed to accommodate a breach failure of Murum Dam, and a cascading failure is a possibility” [Murum EIA Ch7 pg34]

Put simply, because the Murum Dam is placed in the position it is, this IEA report has identified that it could act as a trigger for the failure of the much larger and more dangerous dam further downstream:

“Failure of Murum Dam alone would have relatively small impact as long as Bakun Dam structural integrity is impacts would be confined to the Bakun Reservir. Major impacts would only be expected to occur during a major structural failure of Bakun Dam alone (not Murum), or a cascading failure of both Murum and Bakun Dams.  Both of these occurances would have severe consequences on the downstream river system. While this is a significant impact, its likelihood is very rare”[Murum IEA Ch7 Pg 28] 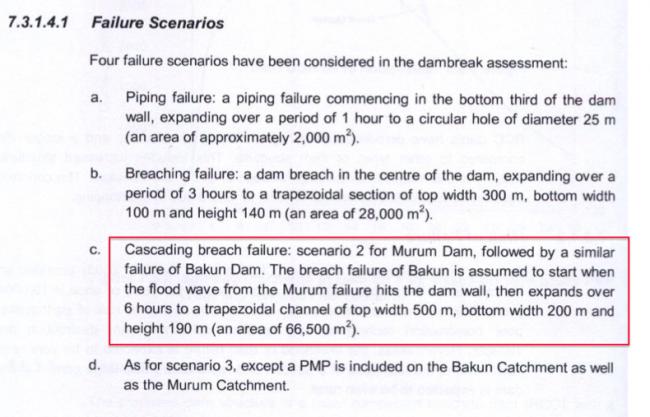 Possible scénarios include the threat of a “cascading failure” of Bakun

One British hydropower expert, who looked at the information, Dr Phillip Williams, told Sarawak Report the findings were “devastating”:

“With that number of people living downstream you would expect a very high standard of safety in the design and in all aspects and operation planning. So the purpose of the [EIA] exercise is to identify how stringent you have to be.. which is why you have to do these EIAs before and not after you charge ahead and build the dam”. [Dr Phillip Williams]

Report classifies project as “high risk”, because even though change of failure is unlikely, the results would be so catastrophic.

Was the added risk of a “cascade effect” factored in?

Bakun was built before the added risk of the Murum Dam was introduced upstream.

Therefore, as the report points out, Bakun was not designed to take into account the need to withstand a possible deluge into the lake behind it from Murum:

“The impacts of dam break are mentioned in Section 7.3: Such event is potentially disastrous because it is likely to result in the cascading failure of Bakun Dam downstream. The downstream impacts would be phenomenal as mentioned” [Section 7.4 Murum EIA] 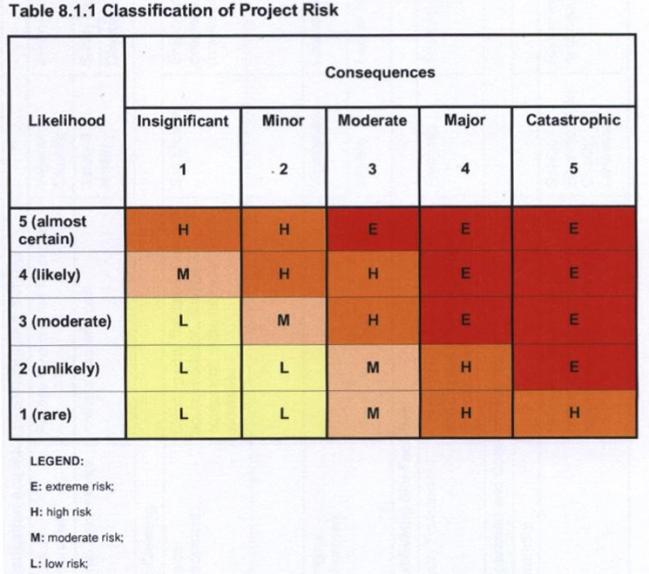 Because of the populations below Bakun even rare or minor events carry ‘high’ or ‘extreme’ risk, says report

Likewise, Murum itself was begun on the whim of the despotic Taib Mahmud before an environmental impact assessment into the possible risks had been carried out, which means that its ultra-sensitive position as a potential trigger behind a Bakun collapse was probably not taken into account into its design either.

The 2008 IEA, therefore, proposes three crucial recommendations to counter the enhanced risk created by the added danger of cascading failure.

Firstly, it suggests a full re-evaluation of the whole design and structure of the Murum Dam in order to take into account the added danger of cascading failure. This recommendation is essentially to re-enforce the strength and safety measures in the design and construction of a dam that was previously considered to be remote and far from endangering communities:

“It is recommended that the detailed design of the dam structure fully investigates potential causes of dam failure and ensures that the design and construction methods are appropriate to ensuring that a cascading risk is outside designated design standards” [Murum EIA Ch7 section 7.3.1.3 Recommendations]

The recommendations then go on to suggest two further measures “if the calculated risk of cascading failure, determined as part of the dam design, is considered to be unacceptable”‘

First it recommends a further investigation and strengthening of Bakun Dam to protect it from any collapse at Murum “to ensure cascading failure does not occur”; second it recommends the development of an Emergency Action Plan to evacuate the people downstream:

Where is the Emergency Action Plan?

Sarawak Report therefore questions SEB as to whether any of these three key recommendations in their own EIA report were ever carried out?

Are Sarawak Energy and the Sarawak State Government so uncaring of its people that they have been willing to hide this embarrassing IEA, rather than going public to admit that everyone living down river should now be forced to learn what to do the moment there is a warning of a possible breach at Bakun?

In many cases an early warning could give communities a few valuable hours to get out of the way of a roaring wave bearing rocks and debris that would surely obliterate every living thing in its wake. Yet what sign is there of any such escape plan having been devised for any of these communities?

Did Taib Mahmud simply not care enough to warn his citizens?

Or is CEO Torstein Sjotveit’s recent announcement that “Murum Dam is completely safe” to be still accepted at face value and without question?

The human risks as summarised by the IEA

A project based on a false premise

There are other reasons why SEB and the BN government would have wished to cover up the Murum EIA, because this document, which Sarawak Report has obtained in full, makes perfectly plain that the purpose given for the dam by the IEA was false.

Although by 2008 it was well known that technically the Bakun Dam could not transmit its electricity undersea to West Malaysia, the Murum IEA still justifies the building of the further Murum Dam on the false premise that all the electricity from Bakun would be used by West Malaysia!

The Statement of Need was never published – if it had been people could have pointed out that Murum was not needed!

In fact Bakun was just last month admitted to be only running at 50% of its enormous capacity with even the ambitious industrial projects of SCORE unable to utilise its output.

This means Murum is not needed by Sarawak and nor are the 15 further dams proposed under Taib’s eccentric programme of ‘industrialisation’.

No wonder the Murum IEA has been covered up!

Taib Mahmud’s family companies are making far too much money out of the construction of these dams, using money borrowed on behalf of the state for him to willingly relinquish these projects – and Adenan Satem does his bidding. 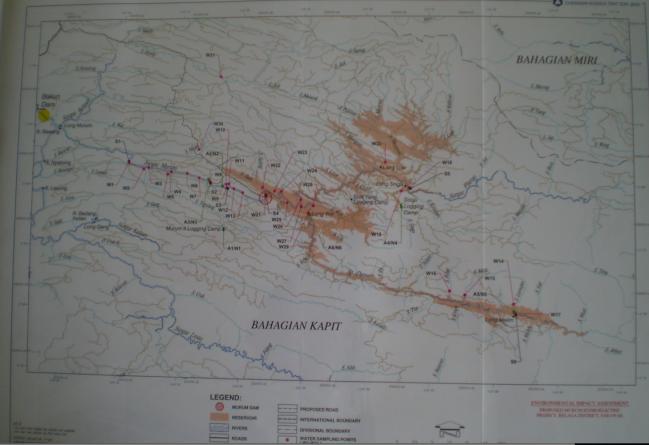 Map of the flooding from Murum

Sarawak Report is concerned that the secretive Murum Dam has been a project led by novices and controlled by a corrupt and over-powerful politician, Taib Mahmud.

Indeed Murum is the first major overseas dam to be completed by the Three Gorges Dam company outside of China and it was commenced in secret, after a deal between Taib, his brother in law Abdul Aziz Husain (the then CEO of SEB) and the Chinese State Government, using a loan from China.

The Three Gorges Company is a still relatively new state-company, which benefitted from the transfer of technology from the western companies, which assisted Three Gorges in building the highly controversial dam on the Yangtze River.

Now it is trying out its newly acquired skills on countries like Sarawak and there have been plenty of problems, like the collapsed diversion tunnel and the sub-standard turbines, which were found not suitable for installation, but have been installed anyway.

So, is SEB’s complacency in order at Murum, considering this Chinese company also clearly failed to spot the danger over where it was placing this dam in the first place?

With so many cover-ups why should anyone accept the assurances by SEB’s CEO Torstein Dale Sjotveit that “Murum Dam is completely safe”?