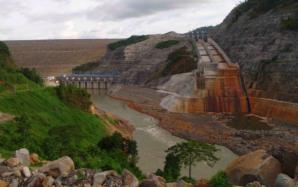 More dams for the benefit of BN cronies.

He today stated that the state government will “have to” build more dams to meet the power demand for its industrial development and for “the people”.

He thundered that he did not care about the growing international criticism:

Satem is right to say NGOs don’t own the rivers, but neither does he.  The people of Sarawak do and one thing this new chief minister notably avoided mentioning in his speech was the angry opposition of Sarawak’s people to BN’s selfish plans.

Because, the people most eager to build these dams are none other than the Taib family who are making billions out of all the contracts.

Whereas the actual people, the people of Sarawak and those communities whose homes and lands will be washed away by these projects, have been making clear all through the Gawai period that they are united against the whole idea.

The people know who stands to benefit from this ‘development’ – this government’s record goes before it of poor treatment of affected communities; negligible compensation and of course zero development in the rural areas. 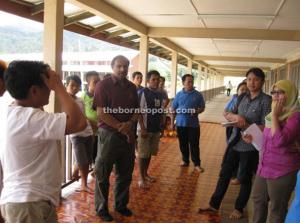 Human Rights commissioner James Nayagam listens to the plight of the Penan in Murum.

Last week, Malaysia’s own human rights commission (SUHAKAM) reported that indigenous Penan people are facing “a myriad of issues” and living in unacceptable conditions in the Murum Dam resettlement sites.

Internationally, the UK’s The Ecologist highlighted how mega-dams in Sarawak are threatening indigenous ethnocide.

The communities of Bakun, Batang Ai, Bengoh, as well as Murum have all seen their lives made miserable by dam developments and those of Baram and elsewhere do not want to follow their fate.

They would prefer smaller projects and mini-hydro plants that benefit them, not foreign/Taib-owned polluting smelting plants miles away.

The local anti-dam group Save Rivers issued the following statement  about the protests that took place at Gawai – protests that united the many local communities of Sarawak.  Adenan Satem’s job is to represent their interests and not destroy their lives.

No opposition to the Baram dam? 500 natives show their objection to the government.

Long Lama Baram: On the last weekend of June 2014, the Anti-dam blockade in Long Lama was buzzing with activities. Folks from near and far in the Baram district were gathered there to celebrate what the Iban called, Ngiling Tekai. 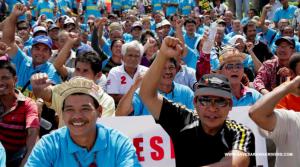 Hundreds of indigenous people are standing strong to save their livelihoods.

It is a traditional celebration to mark the end of the Gawai Dayak (the traditional harvest festivity) which begins on the 1st of June each year until the last day of the month.

At the blockade that weekend, it was also a celebration signifying solidarity with the blockaders in resisting the proposed Baram dam.

Also present were villagers from other blockades in the district which are against illegal logging and exploitation of Native Customary Right (NCR) lands.

The celebration was well received and attended by all. Cooperation among the people was obvious. In the blockade building, starting from the morning of that day, the people were seen cooking, or rehearsing songs and dances while some were putting the final touch for the decorations. 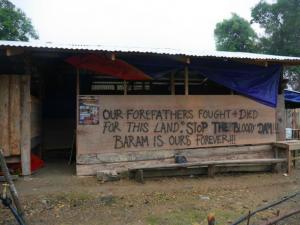 “Our forefathers fought + died for this land. Baram is ours forever” – Message at the blockade site.

The communities who were there on that day reflected the multi ethnicity of the Baram people and they all mixed freely with each other working and enjoying themselves.

At the blockade on that day were Ibans from Baram and Tinjar area, Kenyah, Kayan, Berawan, Tering, Malay, Penan and Chinese from Baram, Tinjar, Tutoh and Apoh area. The attendance register showed more than five hundred people.

The climax of the event was dancing around the “renyai” which is a traditional Iban ritual where dancers would take turn to do the “ngajat” dance around a tree decorated with foods and drinks.

At the end of a turn, the dancer would place some donations at the foot of the tree in favour of the host, in this case, the Baram Protection Action Committee (BPAC) who manages the blockade in Long Lama. Following the “renyai” there were more dances, singing and merry making, until dawn the next day. 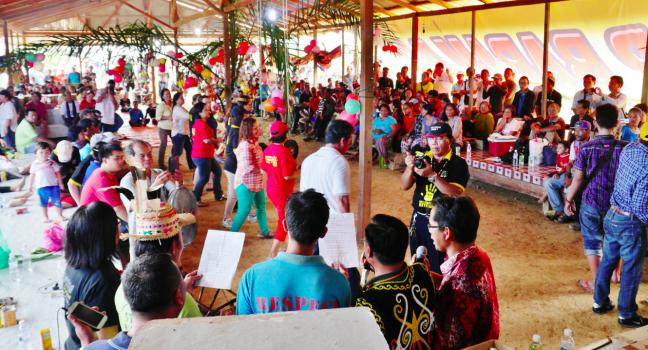 Indigenous communities from across Sarawak turned up to show support. Some facing their own NCR protests.

In welcoming the supporters to the event, Mr. Philip Jau, the Chairman of BPAC said that he was encouraged by the continuous support given by various people since the blockade was set on the 23rd of October 2013.

“This ngeling tekai celebration marks the 250th day since the blockade was set.  The support for this blockade on the access road to the proposed site of the dam is unwavering. With this type of support and cooperation, we can endure whatever happens next. In this matter we are not criminals who break the law but citizens who are marginalised and neglected making their voice heard. Let us defend our rights from these oppressors,” said Philip Jau.

The banner signature campaign started by the youth in SAVE Rivers was also well received; it is to prove the inaccuracy of the statement saying that only three persons are against the proposed Baram dam, mentioned by the Deputy Chief Minister of Sarawak, Tan Sri Jabu anak Numpang in Long Silat recently. There are now about one thousand signatures on the banner and still counting.