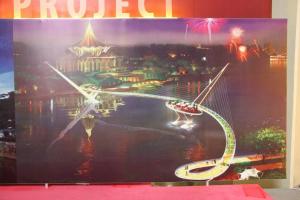 A nice stash of fat state construction contracts were awarded by Taib Mahmud to his own family companies during his last weeks as Chief Minister.

His preferred option of ‘negotiated contracts’ over open tendering means that he effectively negotiated the terms with himself.

As a result Kuching’s waterfront is being altered from its once scenic, modest and traditional charm into a gaudy, golden Arabic confection of towers and swirly curves – all at the behest of Taib, the man who bought his piano off Liberace.

And of course it is Taib who is financially most benefitting from the rash of construction projects now underway. 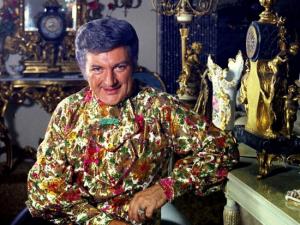 Land has been appropriated from its owners at rock bottom compensation and state funding has also been pumped in, through so-called ‘joint ventures’ with the SEDC (Sarawak Economic Development Corporation).

Such joint projects ensure that while the cost is carried by the public, the profit will go to Taib’s family owned contractors, like CMS, Naim Cendara and PPES.

If only the greedy old despot had at least deferred to others on taste, shocked onlookers have been saying.

But no, this is still the Kingdom of King Taib and it is for him and his companies only to choose the decoration of it.

With projects such at the Golden Bridge (constructor PPES/ Naim Cendara) swooping over the river to form a new entrance to the Golden Goblet new state assembly building (constructor CMS) the capital of the White Rajahs has truly been turned into an Ali Baba pipe dream by the gold obsessed governor – in the style of Las Vegas! 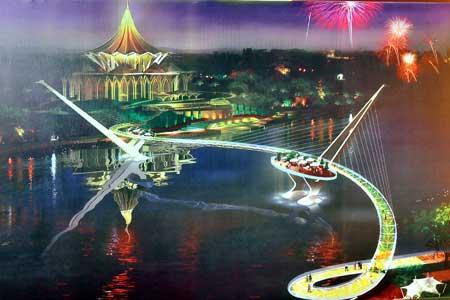 But the really fat contracts of recent months are the two ‘Gateway’ towers, awarded on appropriated land on the Kuching Isthmus.

They will house Taib’s two key state agencies of the past few decades.

One tower is for the Land Custody and Development Authority (LCDA), the department he set up to grab huge swathes of Sarawak under his own control.

The other tower is to house the Sarawak Economic Development Corporation (SEDC), the state investor which has so kindly funded so many of his family ventures, like the jungle resort of Mulu.

The SEDC is also the ‘joint venture partner’ for CMS in building the gateway project to house its own office!

Each of these government office towers have been handed to CMS for a healthy RM76 million – a total bonanza of over RM150million for the Taib family company.

Taib was there to inaugurate the taxpayer funded project last August with his side-kick CMS CEO, the British national Richard Curtis.

The construction projects are just one of an endless stream of contracts the greedy old man has handed without competitive tender to his own outfits. To fund SCORE he as Finance Minister set aside around half the annual state budgets to finance loans to back billions of ringgit worth of mega-constructions, largely using his own companies.

There is no sign he intends this ‘economic development’ plan to be altered now that he is Governor. 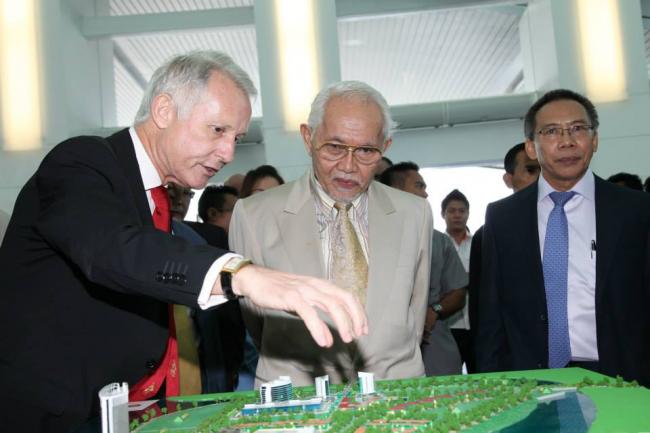 Taib’s own lego kingdom? Kuching’s latest tower block creations to be built by his company CMS

Money borrowed on Sarawak’s budget, which has cut back dramatically on spending on such basics as schools and hospitals, is now gushing into SCORE projects and mega constructions of white elephants, such as these government offices.

No wonder the business media has been touting certain companies as the sure bet beneficiaries of SCORE – of seven key companies identified in the Borneo Post as ‘Sarawak’s Jewels’ all are dominated by Taib’s own family or key business cronies.

Topping the list was CMS, chaired by Taib’s own son.

“Despite less-than-expected results for FY13, Naim Holdings Bhd’s (Naim) earnings prospect remains bright in the foreseeable future driven by SCORE.
“It is evident as it managed to secure RM665 million worth of new contracts in FY13,” outlined analysts at Kenanga Investment Bank Bhd. “We expect the momentum to continue in this year driven by Sarawak’s infrastructure spending within the SCORE project.” [Borneo Post]

Kenanga Investment Bank should know, since they are half owned by CMS, which is owned by Taib!

Also on the list of Sarawak’s top ‘jewels’ is Ta Ann, again chaired by Sepawi;  KKB Engineering, 20% owned by CMS.

The Taib family are making billions out of Sarawak, while ordinary folk (like the Perahu tambang operators, who used to ferry pedestrians across the river) are wondering what benefit comes to them from these greed driven monopolies belonging to the family that still controls the state? 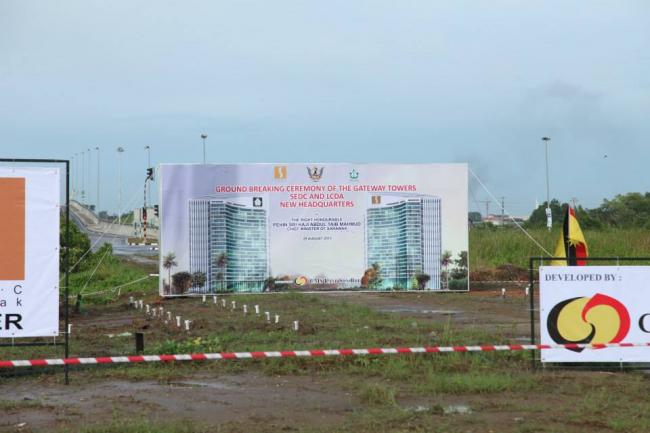 Developed by CMS – of course

Update (from our comments section):

CMS’ current management has also agreed not to invest outside of Sarawak, preparing to catch the wave of growth in the largest state in Malaysia.

“We realised there are very large opportunities coming up in Sarawak in two ways through investing in energy-intensive industries which we are able to do because of our healthy financial position after having exited UBG Group and hence our indirect stake in RHB Bank, and through our key role in developing the state infrastructure,” he [Curtis] says.[Star]