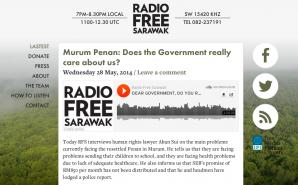 Find the survey on the award-winning Radio Free Sarawak website

There is a small prize raffle for all those who email us back the RFS Awareness Survey – the lucky winners will receive a free return trip for two to Singapore for a weekend, plus two nights at the Ibis Hotel!

The material we would like our ‘information ambassadors’ to take back to their longhouses is all the factual material they have picked up from our sites, plus the clear information below, just published in the US major news outlet, the Huffington Post, about the negative impact of mega dams on local societies and on the rest of the globe.

It was compiled by the NGO International Rivers.

The information we would like you to bring back from the longhouses is completed surveys, showing local people’s opinions about the key issues currently facing them in Sarawak.

We have prepared an Awareness Survey, available in English, Malay and Iban, to find out how people feel about some of the problems in rural areas relating to poverty, deforestation, governance, education and health in their areas.

Over the next few hours this Radio Free Sarawak Awareness Survey, will be available for you to download live on the  link http://radiofreesarawak.org/survey/ and we are relying on conscientious readers and listeners to bring these questions back to their longhouses and get as many people to answer them as possible.

How to conduct the survey

Once you have downloaded the survey in the languages of your choice, you can make as many copies as you like on your computer, to enable you to interview as many people as you are able. You will then be able to send these surveys back by email to us – closing date June 30th.

Each time you email a survey we will put your email address into our raffle to draw the prize! (all email information will be kept confidential).

We hope this survey will help us gain a better picture of the way local people are thinking and what they want.  We will evaluate their responses in a report and the more replies we get, the more informative the results will be.

Please help us by taking our survey up to your village – we hope to get as many longhouses as possible from all over Sarawak represented!

Your duty as question master is not to influence the respondent and not to let others influence them either – but we have no problem with you doing the questions in a group context.

Have fun helping us!

And now read the 10 top things you need to know about dams that Sarawak Energy’s Norwegian boss Torstein Sjotveit forgot to tell you!

About 50,000 dams dams with a height of 15 meters or more and millions of smaller dams have been built on the world’s rivers. Some of them date back centuries, but most were built after World War II. About 5,000 dams have a height of 60 meters or more; another 350 such giants are currently under construction.

2. Dams Are Changing the Face of the Earth:

Dams have fragmented two thirds of the world’s large rivers and flooded a land area the size of California. Their reservoirs contain three times as much water as all the world’s rivers, and constantly lose close to four Niagara Falls to evaporation. Damstrap 40 cubic kilometers of sediments every year, and starve deltas of the silt that protects them against the intruding sea.

Dams block the migration of fish, deplete rivers of oxygen, and interfere with the biological triggers that guide fish. They also reduce the ability of rivers to clean themselves. Due to dam building and other factors, the population of freshwater species declined by 37% between 1970-2008 – more than the populations of any other ecosystems. Tropical freshwater populations declined by a stunning 70%.

5. Dams Are Changing the Climate:

Dams are not climate-neutral. Particularly in the tropics, organic matter rotting in their reservoirs emits methane, an aggressive greenhouse gas. Scientists have estimated that reservoirs account for 4% of all human-made climate change, equivalent to the climate impact of aviation. The floods and droughts caused by climate change in turn make dams less safe and less economic.

Dams have displaced an estimated 80 million people, with 23 million alone in China. Displacement robs people who are already poor and marginalized of their resources, skills and cultural identity, and impoverishes them further. Dams have also negatively impacted about 500 million people living downstream. The benefits of dams often bypass the people who sacrifice their livelihoods for them.

Most dams that displace large populations are being built by authoritarian governments. In Burma, China, Colombia, Ethiopia, Guatemala, Sudan and other countries, dam builders have often responded to opposition with serious human rights violations. In the worst dam-related massacre, more than 440 indigenous people were killed to make way for Guatemala’s Chixoy Dam in 1982.

Large dams belong to the most expensive investments many governments have ever made. An estimated 2000 billion dollars has been spent on dams since 1950. Due to planning errors, technical problems and corruption, dams experience average delays of 44 percent and cost overruns of 96 percent. Such massive overruns make them uneconomic.

Sooner or later reservoirs silt up, and the cost of maintaining dams becomes bigger than their benefits. In the United States, more than 1000 dams have been removed at great cost. When dams are not properly built or maintained, they can break. In the world’s biggest dam disaster, the failure of China’s Banqiao Dam killed an estimated 171,000 people in 1975.

In 2012, governments and businesses installed 75 gigawatt of wind and solar power, compared with 30 gigawatt of hydropower. Such alternatives fare even better when social and environmental impacts and transmission costs are included. The International Energy Agency has proposed that 60 percent of the funds needed to achieve energy access for all should go to local renewable energy projects.