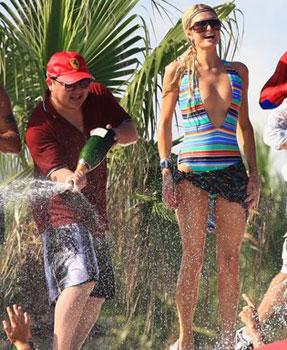 As recently as this March the US public relations firm Edleman issued a statement on Jho Low’s behalf, again denying that his flamboyant investment activities are supported with Malaysian public money borrowed by the fund.

The statement, which was made to the online business news portal Mkini Biz vouched:

“Neither Low nor any company in which Low is a shareholder has ever received any compensation directly from TIA [Terengganu Investment Authority], 1MDB or the Government of Malaysia, or from any activity related to TIA”

But, now research by Sarawak Report has identified UK High Court evidence, which shows that Mr Taik Jho Low’s claims are at best misleading and certainly open to serious question.

We can demonstrate that in January 2011 1MDB submitted a letter on behalf of Low and his private equity company The Wynton Group pledging to back a share purchase of the prestige Coroin hotel group (which includes the leading London hotels Claridges, The Connaught and The Berkeley) against rival bids from the UK’s Barclay brothers.

That pledge backed Wynton to the tune of a final offer of £1.028 billion (RM5.7billion)! 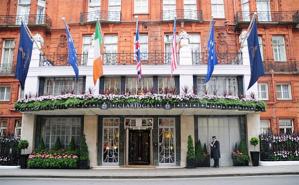 As it turned out, the shareholders turned down the Malaysian bid, in favour of what they viewed as a more reliable lower offer for the shares.

Evidence backed by a judge

The details of the Coroin bid and the involvement by 1MDB in Jho Low’s privately owned company Wynton Group’s attempted buy out are clearly detailed in a 158 page judgement produced on 10th August 2012 by Justice David Richards of the Chancery Division of Britain’s Royal Courts of Justice.

In the interests of transparency it is available for all to read online. 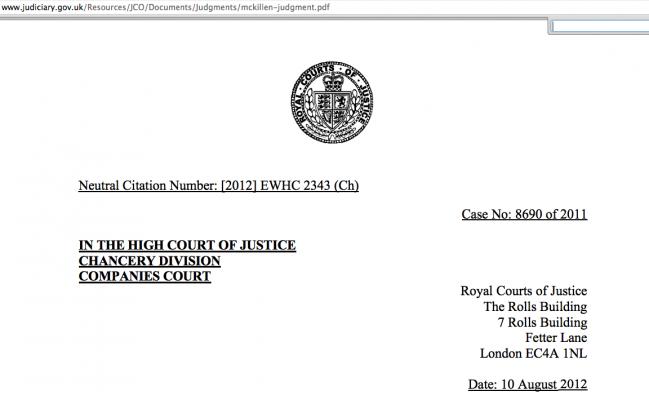 The judgement details how in 2011 rival bidders were attempting to buy up a controlling number of shares in the Coroin Group from the distressed businessman Derek Quinlan (approximately 39% of the company).

The property magnates known as the Barclay brothers were to emerge as the victors in the takeover, but other shareholders questioned their methods, resulting in the legal case and ensuing judgement by Justice Richards.

In the course of that judgement the judge recorded a number of other bids that had been made during the takeover rivalry and one of those came from Malaysia’s Jho Low representing The Wynton Group along with his brother. 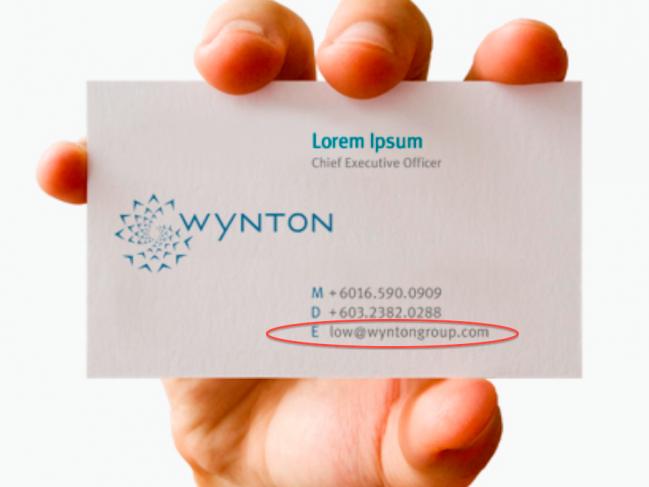 Jho Low’s business card was advertised by his printer!

The judge made it clear on a number of occasions that Low was representing himself and his company as an entity backed by a Malaysian Government ‘sovereign wealth fund’.  In this court document the British judge begins by relating:

“The Malaysian based investor was Jho Low, a businessman with some backing from
a Malaysian sovereign wealth fund. Through an entity called The Wynton Group,
offers were made to the company and its shareholders in January and February
2011″[Approved Judgement – Patrick McKillen v. Misland (Cyprus) Investments Ltd & 10 others – Royal Courts of Justice Para 50]

However, it is clear that the British businessmen selling the shares were not convinced either by Mr Low or the trustworthiness of the Malaysian Government support, according to the judge. As he put it “these [offers] were not at the time taken seriously by most of the shareholders” [paragraph 50].

Nice spot in the Petronas Tower.

But Jho Low did not give up.  He later came back with further strengthened bids and he produced a number of written third party assurances as well, including a letter of 15th January 2011 from 1MDB confirming its support of the offer, as recorded by the judge.

It is these which provide the damning evidence that despite all the denials by the Prime Minister Najib Razak, who is the Chairman of the fund and by Jho Low himself, the private equity dealings of this youthful tycoon have been linked to and closely supported by 1MDB.

The twenty six year old big-spending ‘tycoon’ also had the backing of a Malaysian bank explained the judge and Jho Low himself claimed in a further letter that financing for the offer had been in principle fully underwritten by the Malaysian government:

“As mentioned earlier, it appears that Wynton was controlled by a Malaysian businessman, Jho Low, and his brother. In mid-December 2010, advisers to Wynton made an indicative offer for the shares of the company. Mr McKillen [a shareholder] met Jho Low and his advisers at Claridge’s on 29 December 2010. A revised letter of intent was sent to the shareholders on 3 January 2011, proposing an acquisition of all the shares on the basis of an enterprise value of £1 billion, subject to due diligence and agreement of documentation including warranties and indemnities. An accompanying letter from a Malaysian Bank indicated that it was intended to seek to raise up to £950 million of debt and/or mezzanine finance and £50-£100 million of equity……The provision on 15 January 2011 of a letter from 1 Malaysian Berhad, an investment vehicle wholly owned by the Malaysian government, confirming its support for the offer, did not allay the concerns of the majority of the shareholders. A further letter from Wynton dated 24 January 2011 stated thatthe financing for the offer had “in principle” been fully underwritten by Malaysian government-backed investment funds.” [Judge Richards – Paragraph 135-138]

As the above makes clear, however, despite the formal letter of support by 1 Malaysian (sic) Berhad, the UK shareholders did not feel confident it was a reliable offer.

Mr Murphy on Mr Quinlan’s behalf described it as “pure fantasy … In an email dated 11 January 2011, after Mr McKillen had had his meeting in Doha on 9 January 2011, he wrote  “my sense is that it is an offer that can’t really be delivered either in time or structure. The delivery of the Malaysian government bond is not guaranteed and the deal may end up in an open ended bridging situation because it does not have the proper financing. I also sense that some Malaysian government may have a political motive and that will naturally delay execution. I am conscious that on paper the Malaysian deal is better to me personally, however, we should be looking at credibility and execution”. Mr McLaughlin was of the same view. Even Mr Buchanan was not confident that Wynton would deliver”

The comments show a devastating lack of confidence by these top businessmen in the credibility of Jho Low and also the Malaysian Government.

However, it confirms that the offer referred to by Justice Richards had been placed on the table with the written backing of 1MDB for a bid of just over £1billion pounds.

Contrast this enormous commitment with the series of denials, as all concerned have sought to distance 1MDB from the controversial night-clubbing pal of Najib’s step-son Riza Aziz.

“The role of Jho Low as far as 1MDB is concerned is zero,” said 1MDB CEO Datuk Shahrol Halmi, denying that Low has received compensation for his previous role in the firm. [Malaysia online]

Despite this, in company CV’s Low does acknowledge links to unspecified sovereign wealth funds. 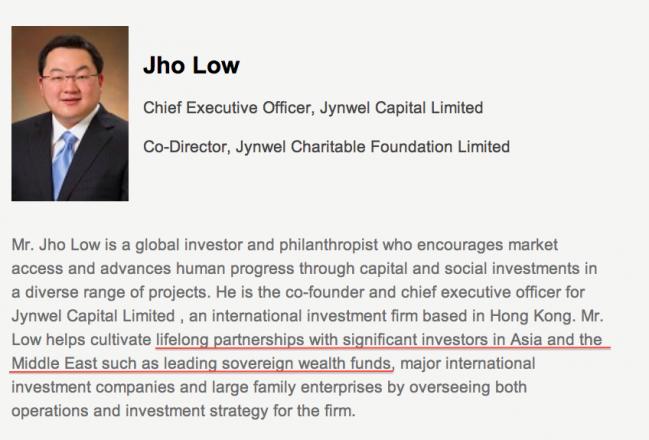 Which sovereign wealth funds? He told the shareholders of Coroin that it was Malaysia’s 1MDB who was backing him, not funds from the Middle East!

The line appears to be that his investors are all from the Middle East and are the parents of kids he made friends with at school in the UK and US.

It’s a pity that Jho Low’s most famous and closest acquaintance appears to be the fellow Malaysian Riza Aziz, whose Dad is the PM and head of 1MDB from which billions are currently inadequately accounted for.

Time to stop hiding the truth

With so much information now contradicting the party-loving Jho Low’s various versions of his life story, leading from college grad to major tycoon in no time flat, it is time for the truth. 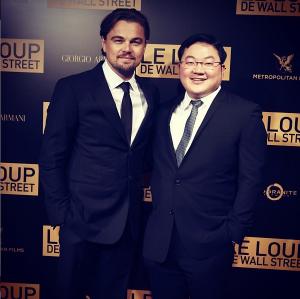 The Chairman of 1MDB, Prime Minister Najib Razak, should explain transparently exactly which projects the fund has supported or offered to support, rather than relying on the pathetically over-due annual report that came out last week, which admits merely that the money is being invested by an anonymous fund manager in the Cayman Islands on anonymous projects with no guarantees whatsoever that the funds are secure!

These are billions of ringgit of public money borrowed at high interest rates supposedly to invest in Malaysian development.

Yet the money has gone no where near Malaysia and no no one is telling where it is or what it is being used for.

It is even being invested at a lower rate of interest than Najib borrowed it for in the first place!

The only exception to this news blackout about what has happened to all this borrowed public money has come from the evidence we have now obtained from this British law case, showing that back in 2011 1MDB funds were offered to secure the purchase of some London Hotels by a private company owned by 26 year old Taek Jho Low!

Sarawak Report is therefore entitled to question certain matters that are hard to explain, unless Jho Low is still being supported by 1MDB.  Key queries include:

– Was the US$100 million upfront investment by Najib’s step-son Riza Aziz’s company Red Granite Productions in the film Wolf of Wall Street in any way financed or guaranteed by 1MDB?

– Does Jho Low’s lavish expenditure on entertainment, which has broken records in nightclubs in many of the world’s most expensive hot spots, owe in any way to support from Malaysia’s publicly funded sovereign wealth fund?

– Was the reason Jho Low gained a rare personal credit at the end of Wolf of Wall Street because it was he who financed the entire film project, as people who worked on the project understood was the case?

– Since Jho Low has been demonstrated as having employed a guarantee from 1MDB to back his personal buy-out attempt of a London hotel group, is it not fair to conclude that Jho Low is in fact an agent for the fund and is acting to transfer this public money into private hands abroad rather than investing it in Malaysian development? 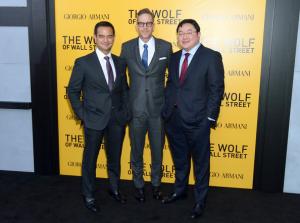 When Sarawak Report first asked about the sources of Riza Aziz’s enormous funds, libel threats were issued by the Hollywood lawyers Loeb & Loeb, threatening immediate action unless the posts were removed.

The posts were neither removed nor amended and four months later the threats have not been carried out.

Indeed it is now Loeb & Loeb who are removed from the brief and Red Granite Productions have hired a separate legal team.

A subpoena is believed to exist for Riza Aziz’s financial records with the Hollywood wealth management company NKSFB, where his account manager is Debra Johnson.

Debra is the wife of Channing Johnson, who was the senior partner at Loeb & Loeb in charge of overseeing the legal threats against Sarawak Report by Red Granite Productions.