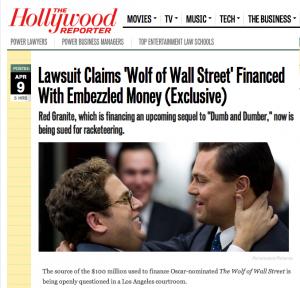 The Hollywood law suit initiated by Najib’s step-son Riza Aziz against fellow producers Steve Stabler and Brad Krevoy has rebounded with accusations against him, according to reports in the Los Angeles media.

The two have amended their counter-suit against Aziz and his well-funded production company Red Granite to accuse him of ‘violation of the Racketeer Influenced and Corrupt Organizations Act’!

Both the Hollywood Reporter, who lead with an exclusive on the story and the widely read Deadline online site have published the new accusations, which have been placed before the California court as part of a wrangle over rights and credits for the upcoming Dumb and Dumber To.

In Section 5 of the amended deposition by Stabler and Krevoy’s lawyers Freedman & Taitelman it is stated: 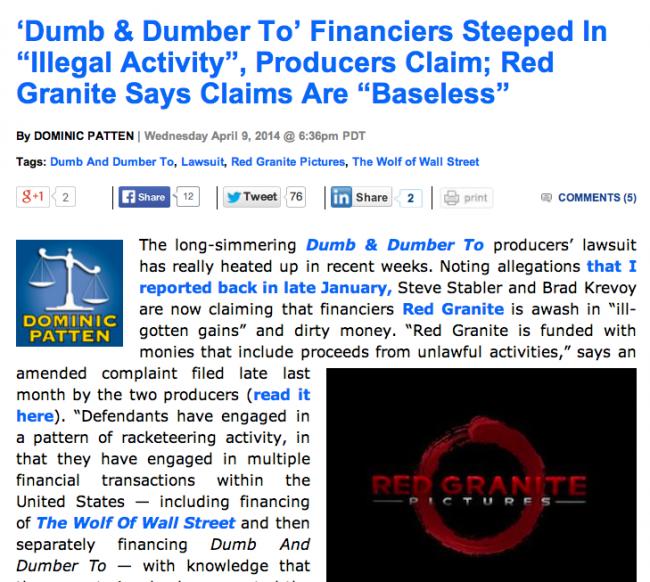 “Really heated up” – how Hollywood’s Deadline covered the story

“56. Defendants have engaged in a pattern of racketeering activity, in that they have engaged in multiple financial transactions within the United States – including financing of “The Wolf of Wall Street” and then separately financing “Dumb and Dumber To” – with knowledge that the property involved represented the proceeds of illegal activity and with knowledge that the transactions were designed to conceal the nature, location, source, ownership, or control of the proceeds of the illegal activity, all in violation of 18 U.S.C. § 1956. Each of these transactions occurred after the formation of Red Granite in or about September 2010.”

57. Defendants have used and invested the proceeds of their pattern of racketeering activity in the operation of Red Granite, in violation of 18 U.S.C. § 1962(a).

58. Defendants’ funding of Red Granite with proceeds of illegal activity has enabled Red Granite to acquire the rights to “Dumb and Dumber To.” Following the acquisition of those rights, Red Granite disavowed Plaintiffs’ rights of first negotiation that hitherto had been honored by New Line and Warner Bros.

The case has certainly captured the interest of Hollywood’s legal writers, who rarely see such direct accusations. It comes shortly after the blockbuster Wolf of Wall Street, which cost over $100million to fund (a sum that Riza Aziz and his partner Joey Mcfarland were able to put straight on the table) failed to gain a single Oscar. 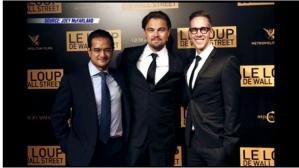 The refusal of the Academy Awards Committee to allow Aziz to be nominated as a producer of the film in advance of the Oscars had already raised eyebrows and speculation in the ‘Tinsel Town’.

These events were shortly followed by the resignation of Red Granite’s most experienced and well-known staff member the Production President Joe Gatta.

The story has provoked comment on the obscure nature of much of Hollywood’s funding and discussion over the industry’s long-standing reputation for not asking too deeply about the vast sums of money that washes through its movies.

During the course of the day other news outlets have leapt on the story, including the top magazine Variety and The Wire. 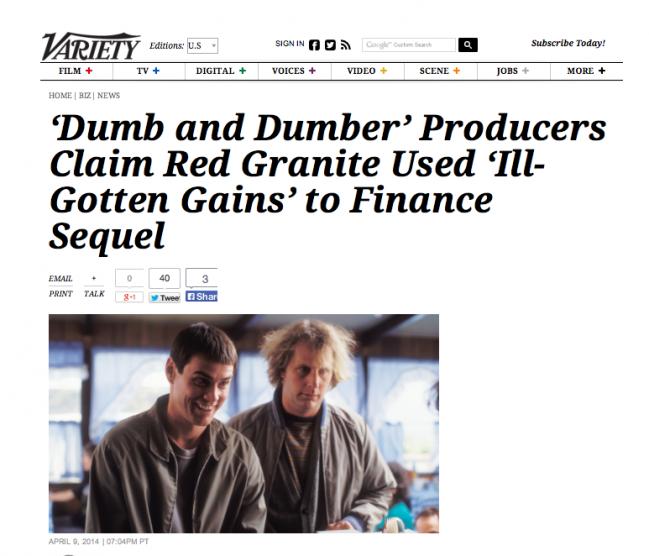 Claim that Aziz ‘funded the company “with monies that include proceeds from unlawful activities,” ‘ – Variety

Red Granite has hit back with angry statements of denial.  The firm, which is represented by big hitter lawyers Loeb and Loeb told the Hollywood Reporter:

“These false, malicious and baseless allegations are demonstrably untrue, and Red Granite looks forward to the prompt dismissal of these claims. Not surprisingly, given they have no facts to back up their accusations Messrs. Krevoy and Stabler resorted to rank speculation and innuendo. There is simply nothing to these naked allegations.”

Loeb and Loeb have also written two lengthy legal letters to this blog, claiming that our coverage of Riza Aziz and Red Granite’s involvement in the movie business was libellous.  However, so far, their threats to sue Sarawak Report have not been carried out.

Hollywood is now waiting to see if Red Granite and its lawyers will face up to countering these latest allegations in court or settle its suit, which originated as an attempt to write out the original producers from their upcoming film Dumb and Dumber To. 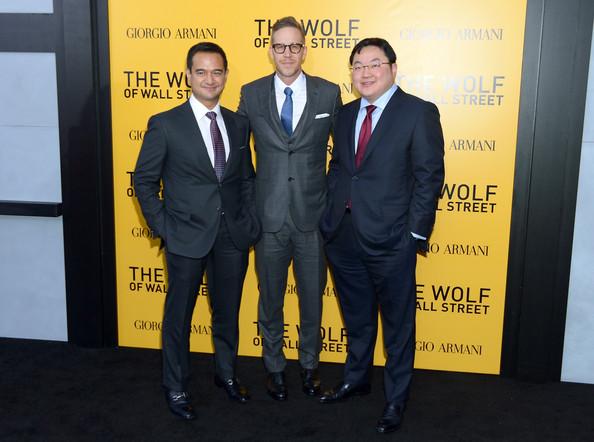 ‘Special Thanks’ were credited to the mystery financier and Aziz’s family friend Jho Low for Wolf of Wall Street.