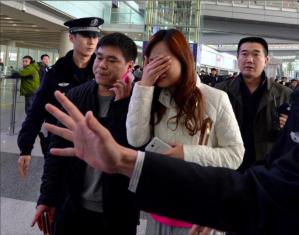 Malaysians are used to suffering under third rate leaders, promoted because of family not merit, and they are used to incompetence (or worse) being ignored or covered up by a compliant media.

However, others are not.

As the days have rolled by since the disappearance of Flight MH370, more and more countries with citizens on board have been left in askance over the apparent ineptness of the people supposedly running Malaysia and their crony civil service.

Today, this matter has finally taken centre stage in the international news coverage as exasperated onlookers and overseas officials have finally given expression to the issue.

Malaysia itself has become the media story and it is not coming out at all well from it.

The US’s Bloomberg News led the way with an article called “Malaysia Failing to Manage Crisis Exposes Leadership Limit”.  In the article it points out that a fundamental weakness of the country has been the complacency of a 50 year old regime that has got used to being able to control its own publicity:

“Malaysia, aspiring to become a developed nation in six years, is finding that more than 50 years under one coalition and tight control over information is a mismatch for handling a rapidly growing crisis followed across the world”, begins the article, which goes on to point out that the Transport Minister is Najib’s own cousin.

The writers then pin point what has been the major problem with Malaysia’s handling of the crisis so far, which has been a combination of lack of transparency, when transparency was required, with appalling and unnecessary open gaffs by senior people who should know better.

The government’s lack of a clear message, compounded by a series of false leads on the plane’s whereabouts and questions on coordination, risks undermining its image internationally. “They’re handling a huge global issue as if it was domestic politics,” [Bloomberg] 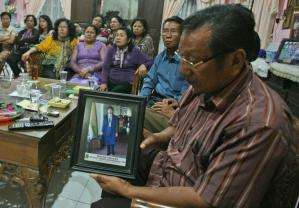 The quips by senior officials about ‘Asian looking men’ using European name passports and about ‘evidence’ that the plane had turned back on its own path have stood out as particularly irresponsible red herrings tossed out over the past few days, in what has clearly been a totally uncoordinated and undisciplined response to this disaster.

To the rest of the international community it has seemed sorely unprofessional.

The nations of the world have been sent chasing after terrorists and hijackers on the strength of such remarks and have indeed expanded their searches over great swathes of the planet, including the Indian Ocean, because of such ill-advised comments, which have later been disowned and denied by the people who apparently made them.

As the first indications of debris are now apparently starting to appear in the sea, exactly at the spot the airplane lost contact the UK’s Guardian Newspaper has also taken up the criticism of Malaysia. 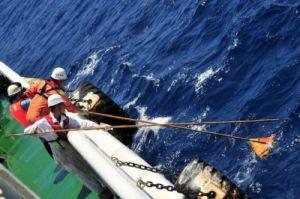 Fishermen reported this debris to the Malaysian Maritime Agency, which dropped it during attempted salvage – ‘boarding’ was written on the apparent life raft.

In their own headline entitled “Malaysia Airlines search mired in confusion over plane’s final path – Vietnam cuts back efforts to find flight MH370, blaming Malaysia, amid swirl of contradictory statements by officials” the Guardian reports that international cooperation on the search is finally beginning to break down in response to Malaysia’s mishandling of events:

“The search for the missing Malaysia Airlines flight was descending into confusion and acrimony on Wednesday as Vietnam called off part of its search pending further information from Malaysia”, the paper says. “Disagreements within the international search operation were surfacing and Malaysian officials failed to clarify the aircraft’s last known movements”

Meanwhile, the BBC is leading on a denial by the PM’s cousin/ come Transport Minister that there is any confusion over the whereabouts of the missing plane.

Their headline “Malaysia Airlines plane search ‘confusion’ denied” is unfortunately designed to elicit guffaws from its readers, who well know the opposite is true.

Over in the US TV news channel CNN put the matter succinctly enough in its own report:

“More than four days since Malaysia Airlines Flight 370 disappeared over Southeast Asia, Malaysian officials not only don’t know what happened to the plane, they don’t seem sure where to look. On Wednesday, officials announced they had once again expanded the search area. It now covers 27,000 square miles, more than double the size of the area being searched just a day before. Such a dramatic expansion at this stage of the investigation is troubling, said CNN aviation expert Richard Quest.” [CNN News]

It is quite heart rending that, on top of the agony of the tragedy itself, Malaysia should be earning such unwanted embarrassment. 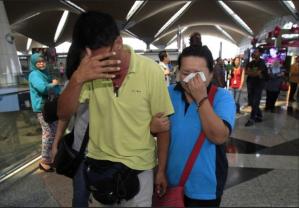 Crucial to provide the best support possible to those affected

Of course, it can be pointed out that any country facing such circumstances runs the risk of this kind of criticism, not all of which is necessarily deserved.

However, BN have walked into more mishaps than most in handling this crisis, leaving the wider world with a much clearer understanding of the inadequacies of this outdated and clumsy regime, whose leaders have concentrated on little more than hanging on to power and making as much money as they can, for several decades too long in government.

Last word goes to the New York Daily News, which shows how China and the United States have been united in this case by their joint frustration over Malaysian muddling:

The mystery surrounding the fate of Flight 370 has been compounded by confusing and occasionally conflicting statements by Malaysian officials, adding to the anguish of relatives of the 239 people on board the flight — two thirds of them Chinese. “There’s too much information and confusion right now. It is very hard for us to decide whether a given piece of information is accurate,” Chinese Foreign Ministry spokesman Qin Gang told reporters in Beijing.[New York Daily News]

It is a reminder to BN that being in government is not just about staying in power, it is about doing a job for the people.

Allowing open and honest criticism, instead of stifling fee media and locking up critics for ‘encouraging dissatisfaction with the government’ is a vital first step towards doing a far better job than they are now.