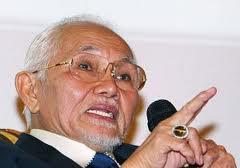 After hiding the past few days Taib Mahmud has made another of his non-announcements.

He has announced that he will make a real announcement next week about what he plans to do about his future.

For the umpteenth time we are told the Chief Minister has agreed he will retire, this time at a PBB Supreme Council meeting.

But, he is still refusing to fix a date, which he continues to make clear is in his own hands.

He is even claiming the right to name his own successor and those poodles in PBB have today agreed to indulge this preposterous demand without question!

This is democracy Sarawak-style.  One man one vote!

Retirement or just a change of address? 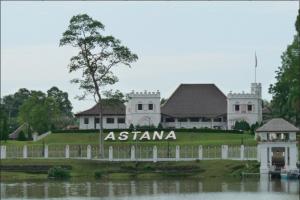 This gracious heritage building has now been disfigured by Taib’s planned Administrative Wing, so he can keep running Sarawak.

Of course, when Taib has hinted he might retire, what he has actually said is he plans a change of title and a change of address.

He plans to move upstairs to be Governor.

The poodles in PBB have therefore dutifully voted to nominate him to be Governor.

Without doubt Taib has already squared it all with the PM, who owes him for the crucial seats that kept BN in power at GE13.

So, having placed the person of his choice in the CM’s office, Taib is hoping he can continue to manage things as before, while pretending he has lived up to his promises to stop running Sarawak like his personal business enterprise.

It was back last year that Sarawak Report broke the story that Taib has been personally supervising (through his daughter) the renovations to the governor’s palace to accommodate a large new administrative wing and a mosque.

Taib evidently reckons he can do a President Putin and just swap around the constitutional roles of chief minister and governor. Hence the need for all those new offices for the staff he plans to transfer with him. 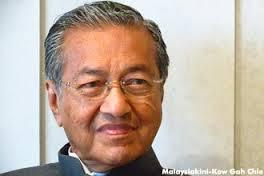 But, despite all the manoeuvring, the old leader is clearly still dithering.

The betting shops in Kuching must be doing good business, because clearly Taib himself has not yet quite made up his mind what he will do on Monday.

Can he trust even the most sickly, weak and compromised of family members to be his successor?  Will he be able to control that person’s own successor?

Will being Governor really give him the much speculated ‘immunity from prosecution’, which he is banking on?  There is no legal reason why it should.

And, of course, like all old men, Taib is ferociously reluctant to admit that any of his powers might be failing. He is certain he could keep going another decade, like Robert Mugabe (whom he resembles in terms of his total power).

In fact, Taib has so effectively tamed his party, cornered the opposition and ensured such a dearth of able people around him that he could indeed expect to continue unchallenged for another decade, ruling from a wheelchair if need be.

The only reason he has to go is because of the scandal and upset over his blatant corruption, which has become intolerable for BN, desperate to win back support before the dreaded further test of GE14.

This is very annoying for Taib, who reckons that if he just ignores criticism he can get away with it and that his federal colleagues should show more spine. 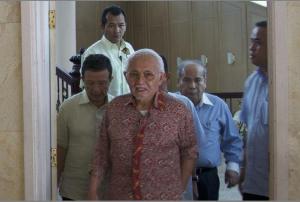 Taib’s main model in all of this is manoeuvring over retirement, of course, is his former BN colleague Mahathir Mohamad.

Like Mahathir, scandal is forcing him to step aside, but he intends to remain the backseat driver.

No one will be fooled, however, and Taib Mahmud should not expect the criticism to disappear as he continues to exploit his control over the levers of power to make vast wealth out of the people of Sarawak.

Because, whether or not he decides to announce on Monday that he intends to win the next state election before retiring or move to the Astana now to give his chosen successor time, nothing will change.

Dithering Taib Mahmud intends to stay in power, he is just not quite sure how to best to go about it.