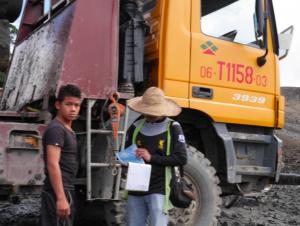 Sarawak Report has learnt that the Taib crony timber company Samling has started stripping bare reserved native timber areas in Baram, in apparent anticipation that the region will be flooded by the proposed Baram Dam.

This is despite the fact that the relevant impact assessments have not been completed and the project has yet to receive any official go-ahead.

The area concerned is around Long Palai in the Long Anap area and is designated as reserved native pulau galau forest.

Samling has no licence and no rights to log the area, but locals believe they are moving in fast, in order to take advantage of the fact the area will soon be flooded, if the Chief Minister gets his way.  One timber industry insider confirmed suspicions over Samling’s tactics:

“For two, three years now, they have been extracting the timber, including the temuda [cultivated] lands, because they know this land will be submerged. So they do the work without bothering with any P.E.C.[Permit to Enter Coup/ licence]. Last year and probably two, three years to come.” 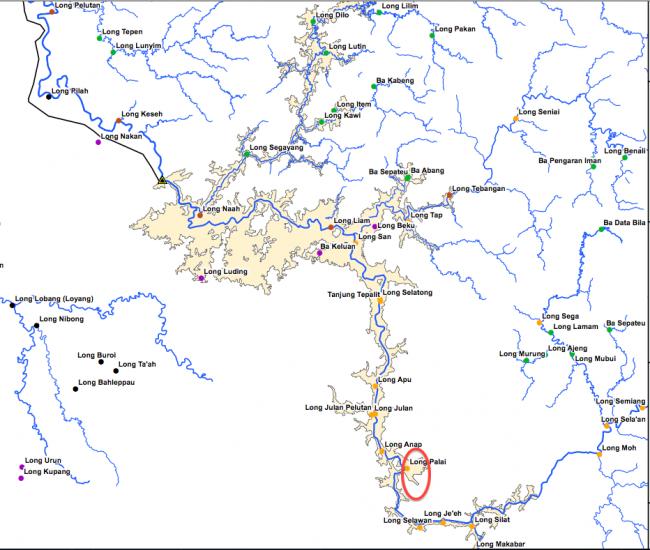 Taib wants the Baram Dam, so it must happen?

While Chief Minister Taib Mahmud has made no secret of his enthusiasm to destroy the Baram River in his quest for yet more hydro-power, the project is hugely unpopular with local people. 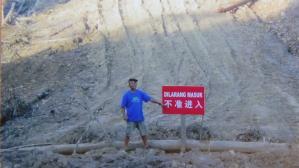 Locals have discovered this illegal road driven by Samling through Long Palai and blocked it.

Tens of thousands are due to lose their homes if the flooding goes ahead and recently the community around Long Palai were apparently successful in driving the company off their forest land.

They have placed logs and “keep out” signs across a new dirt road they discovered that the company had driven into their territories without permission in order to conduct their logging raids.

Roads such as these are makeshift and last only the short while that they serve the purpose of the timber companies, before collapsing into disrepair and creating serious erosion problems.

They are therefore not even of use to the local community terms of improving transport links and the locals are determined to disable further use of them by Samling. 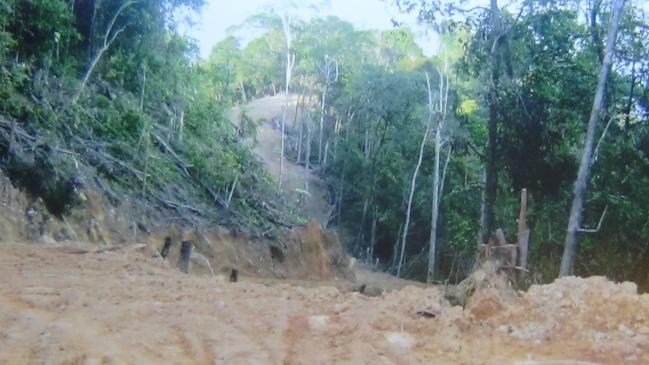 Samling’s makeshift logging roads in Long Palai – useless to locals and cause of massive erosion.

One observer of the situation in Long Palai told Sarawak Report that Forestry Department Officials appeared to be deliberately failing to record the activities of the company:

“The Forestry [Department] has been misled. Whichever company they visit, where the activities run without any P.E.C, they won’t get in. They simply go into the camp. Because they come just to negotiate with the camp manager, top management, they don’t have to enter the logging block. If they insisted on entering, they would find problems, and that would not be good, thus they simply settle in the camp. They only work at the log pond.” [translation of interview with an industry insider]

This was the same interviewee’s finding on the situation in the area around Long Palai:

“The area is between Long Palai, Long Anap, the main road, all the way to Long Je’eh. All is illegal logging, as there is no P.E.C, so, illegal logging. Been since last year. I went there recently, a few days ago, went to Long Mekabang. While we went along the main road there was logging equipment on the left and right sides of the road, Samling’s equipment, for logging. We suspected they were stealing logs. They have logged wherever they can, by the road sides, river banks, near Hulu Baram. That’s what Samling have been doing now, they came to log, so free. Later they negotiated with the villagers, but the value was too small. When the villagers refused, they would intimidate them. So, that made them went on strike. Those from Long Palai had stopped Samling from entering their area, as they have rights to their forests.”

Locals believe that the timber company is taking advantage of the confusion, caused by the plans to flood the region, to snatch timber from outside the company’s actual licence area, the concession T/0413. 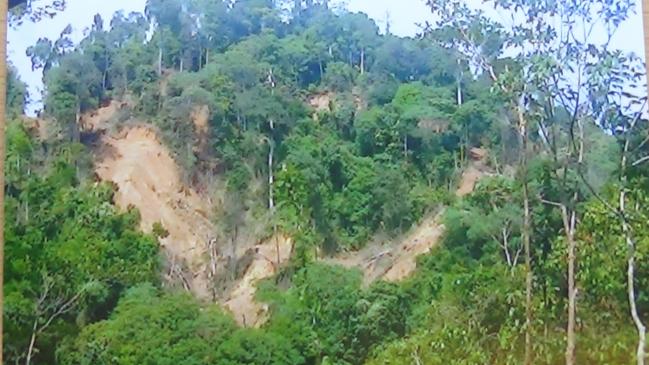 Scenes of erosion are testament to Samling’s destructive logging practices all over Baram region.

T/0413 is a good distance away in the Long Tungan area, which is already stripped bare, say the locals.

One observer told Sarawak Report that the company is clearly the outfit to blame in Long Palai, “because the vehicles and the workers all belong to Samling”. 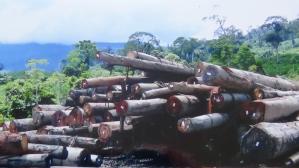 Road sides piled with illegal logs throughout the region

He also alleged that the ‘Kilometre Ten’ logging camp, which supposedly holds timber from Long Tungan, is in fact being stocked with wood, including primary jungle, from Long Palai:

“There is no wood left in Long Tungan, so how come we see these enormous trunks coming into the log pond?”, he stated.

Once the timber is then transported on to the log pond further down river the origins of the logs are no longer possible to trace, given the poor practices permitted by the Sarawak State Government.

Taib as Chief Minister has consistently rejected pressures from the European Union and other potential importers to implement improved and more sustainable logging practices and monitoring.

An insider source, who worked for Samling, confirms that at present the majority of the wood being illegally logged in Baram is being exported to Japan, where the authorities have been prepared to accept as ‘legal’ any wood that has been certified by Sarawak Forestry officials.

“Over 90% of the logging in the Baram area is currently unauthorised logging i.e. without a permit”, he confirmed, “but once it has reached the log pond it is labelled by the company graders as permitted timber and attributed to areas where Samling has been given permits to log.  In fact these permitted areas were already logged out a long time ago”.

The industry insider confirmed that much of the wood now being taken from the area by Samling consists of protected species such as the valuable ‘Ironwood’ tree, Tapang (Koompassia Excelsa).  This endangered tree is illegal to cut down, except with the express permission of the Director of Forests and yet people in the area say that over the past months Samling have been taking them down:

“All along the road you could see these protected species standing over the past several years.  But since the end of last year they’re all gone. It is due to the very high market price caused by the earthquake in Japan. It is all done by Samling.  More than 300 Tapang trees have been cut in the licenced area T/0404 since September last year and they are still doing it.” 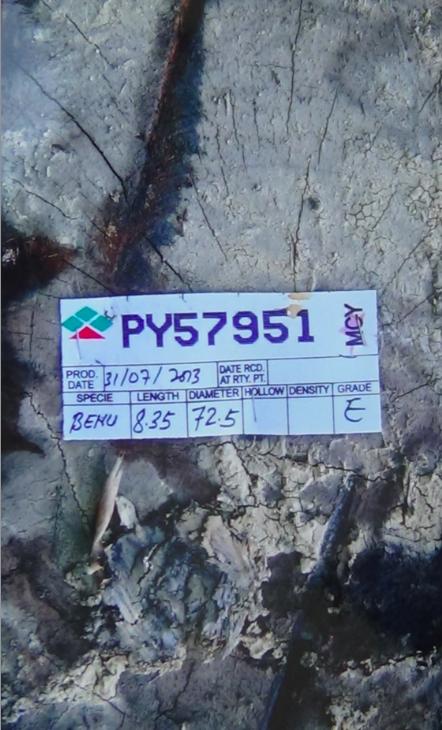 False labelling this illegal Tapang log has been falsely labelled by Samling managers as Benuang (‘Benu’), which is not protected, in advance of being sent to the log pond

Particularly incriminating, says our industry insider is the false labelling of illegal timber, which he says shows a deliberate intention to mislead by the Samling camp managers.

“They claimed they have been given the permit to log Tapang, when they were challenged.  But then why do they falsely claim that these Tapang logs are Benuang on the labels they put on them?”, said the source whose experience in the industry has made him expert on the identification of timber.

Evidence along the road side in Long Palai has also pointed to the fact that small time timber raiders have also been chopping down the valuable and endangered Belian tree in the area.  Piles of the timber can be seen, already sawn up by the roadsides, waiting for the rogue outfits to send vehicles to pick them up. 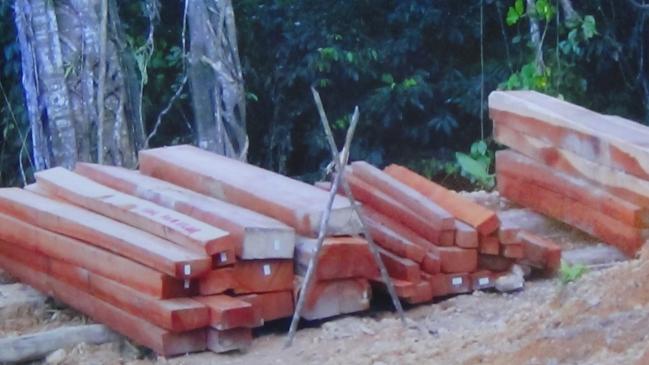 Local people who are suffering these raids on their legal reserved native areas say that the destruction of their region has been made worse by the anticipation that much of it will be destroyed by Taib’s planned Baram Dam.  They receive little money themselves for the wood at source, even though it sells for millions on the world markets.  As such, they would prefer to keep their forests and keep Samling out.

With Taib continuing in situ as Governor and de facto head of state there can be little hope that the illegal destruction will be brought to a halt.