Taib SCORE's Every Time - But What About Sarawak? 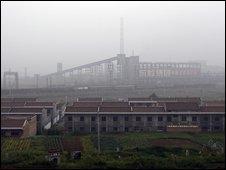 Manganese smelters are also pouring in from China – do they benefit Sarawakians or Taib?

Every piece of investment information that comes out of the so-called SCORE project (Sarawak Corridor Of Renewable Energy) appears to have one thing in common.  It boosts the wealth of Chief Minister Taib Mahmud and his family.

In fact, the most obvious motivation behind the entire state-backed project is to enrich this family further and provide investment opportunities for the enormous sums they have previously gained from timber and plantation concessions and contracts, so kindly granted them by Abdul Taib Mahmud himself.

One should also not forget that this whole SCORE project is being financed through unusual and secretive private bonds, raised at double the interest rate available on the open market, through off-shore Labuan.

This means that someone is getting a fine return on their money, at the expense of Sarawak, but no one knows quite who.

The latest big project that has been launched in SCORE’s Simalajau base is a planned phosphate fertiliser factory.

This is a RM1billion investment, headed, of course, by Taib’s family firm CMS.  CMS is being fronted these days by the Chief Minister’s favourite foreign fellow traveller of the moment, Richard Curtis (a UK national based in Malaysia). 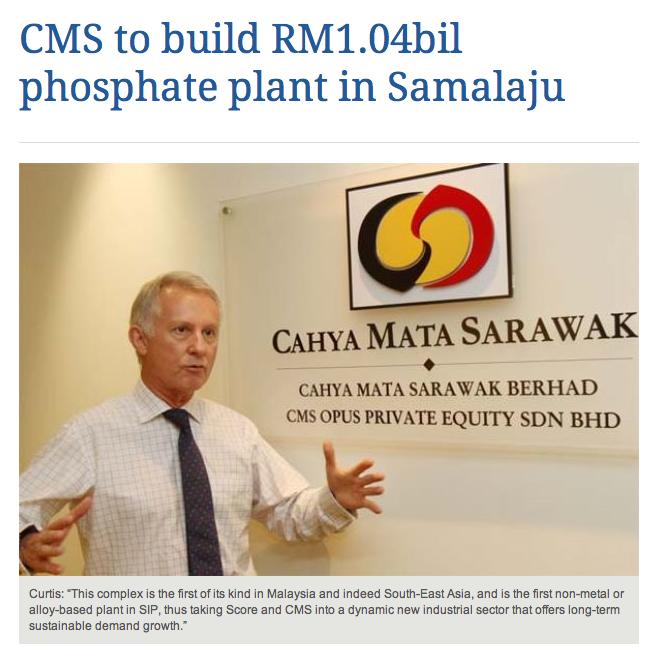 Curtis, promoting the latest multi-million project of CMS in The Star

Like so many of the industries that Taib is eagerly welcoming to Sarawak phosphate production represents a major potential health hazard and environmental menace. 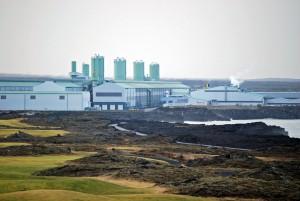 It has long been a concern of NGOs that the regulation and governance around the adoption of such dangerous industries in such a very important and sensitive environment as Sarawak has been woeful under the Taib administration.

Most of the businesses in Sarawak hold a vested interest for this Chief Minister and yet he holds total, ultimate control over the environmental and social regulations and impact assessments involved.

By all judgements, when such assessments have taken place at all, they have been mere fig leafs and a nod towards greenwash.

The Simalajau phosphate plant is a case in point.  It will churn out half a million tons of this highly impactful substance every year, but what oversight has there been?

Phosphate is a fertilizer and has extremely reactive ingredients. Mr Curtis has made the point that the new CMS venture represents the first factory of its kind in South East Asia.  There is at least one good reason:

“In the early predawn hours when the air is still and moist, phosphate fertilizer factories are often shrouded in an acidic haze. Temperature inversions form airy bubbles of noxious, acidic fumes. Lights from the factories seem to blaze through the hellish mist, and the lemony taste of sulfuric and hydrofluoric acid leaves the lips tingling with a slight burning sensation. Then the delicate tissues in the nostrils begin to tingle with a stinging sensation. Floating and sparkling in the still morning air, microscopic acid droplets splash against the thin film of fluid protecting the eyes, and subsequent burning and watering blur one’s vision. And finally, the full impact of inhaling the noxious smog causes choking and coughing.

Sometimes, the misting hydrofluoric, fluorosilicic, phosphoric and sulfuric acids are so concentrated, they etch the windshields and eat the paint off cars passing through the fog.

For those employed at the phosphoric acid factories, this is the work world they enter every day. Day in and day out, they eat, breathe, and drink toxic pollution until they become too sick to work, or die.

Gary Owen Pittman was one of those people. While Gary and his coworkers worked amidst the toxic, corrosive fumes, the corporate elite at Occidental Chemical Corporation sat safely in well-ventilated, air-conditioned offices some seven miles from the factory.

The emissions were so acidic at the plant, visiting secretaries complained of their panty hose being dissolved on their legs. Reassuringly, management said they had come into contact with some chemicals, but there was nothing to worry about.

Gary’s first and last job was working for the Occidental Chemical Corporation’s phosphoric acid factories in Hamilton County, Florida. Gary Pittman was 18 years old and in excellent health when he started to work in the analytical laboratory of the Suwannee River Plant. He rose from a $4,000 sample man in the laboratory to supervising one third of Occidental’s Swift Creek plant, earning about $50,000 a year. 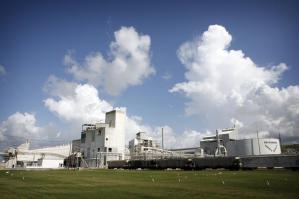 It is an established fact that if phosphate is not handled with extreme care and professionalism, this substance and its ingredients represent severe potential risks and hazards to human health.

What is more, the impact of phosphate fertilizer on the environment is also extremely potent and any escapes or negligent practices would affect the Borneo Rainforests of the the state.

Take a look for example at the truly alarming list of hazards laid out in the World Bank’s International Finance Corporation guidelines on the manufacture of phosphates:

It goes on to outline the issues of human safety:

Ammonia and acids vapors, especially HF, are common toxic chemicals in phosphate fertilizer plants….WORLD BANK GROUP recommendations to prevent and control chemical exposure in this sector: Avoid contact of acids with strong caustic substances. The resulting reaction is exothermic and may cause splashes; Control fluoride gas build up in phosphoric acid storage tanks; Install gas detectors in hazard areas;Provide adequate ventilation (e.g. air extraction and filtration systems) in all areas where products are produced, stored, and handled; Provide training and personal protection equipment for personnel as described in the General EHS Guidelines.

Decomposition fire and explosion hazards may be generated from slurry pump explosions due to insufficient flow through the pump or incorrect design; slurry decompositions due to low pH,high temperature and contaminated raw materials; and hydrogen gas generation due to phosphoric acid contact with ferrous metals.

The manufacture, storage and transport of NPK fertilizers may generate a hazard related to self-sustaining decomposition of fertilizer compounds withammonium nitrate at temperatures in excess of 130°C16. Decomposition is dependant on product grades and formulations, and may release significant amounts of toxic fumes.

All this suggests at the very minimum the need for a transparent management and powerful and independent safety regulator before any such factory should be even considered for a part of the world where people live and where there is a sensitive environment, like in Sarawak. 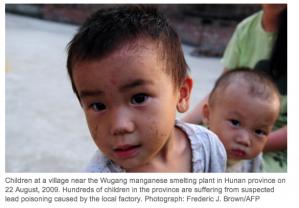 Yet, these do not exist in a state that is run by one man, who is making family money out of the factory concerned.

That there has not even been mention of these issues in any of the press coverage about the plans for the plant says all you need to know about the unsuitability of placing hazardous factories into a political environment like this rogue Malaysian state.

At the very least, local people should have been fully informed in advance of the issues and be allowed to consider the risks before this project was announced (fat chance). And there should be on-going scrutiny to be sure that Sarawak matches up to the stringent safety guidelines expected of the more scientifically advanced countries, which normally operate such factories.

There is no evidence whatsoever of this due process having taken place under Mr Curtis’s watch in Sarawak and there is little evidence as to who is running this factory on behalf of CMS.

Why should people just TRUST Taib to appoint the right people to manage his plant? 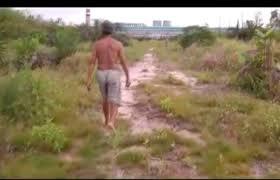 As with so many of the factories popping up with SCORE, the local people seem to be at the receiving end of all the pollution threats, but not necessarily benefitting from any of the promised jobs.

In the case of this factory the question is are the local people qualified to manage such sensitive products and if not are they being trained?

And the answer sadly is “No”. Taib has neglected the education of his people for the past 35 years.

So, no surprise that all that has been heard talk of is the need to import tens of thousands of more qualified foreign workers from ‘good Muslim countries’ like Bangladesh to work on plants such as these.

Why should this reassure locals that they will end up benefitting?

For Taib Mahmud to convince anyone about the positive aspects of introducing huge chemical and smelting factories into Sarawak, and damming up and destroying the river environment in the process, he needs to start coming out with all the facts.

So far it has just been patronising waffle, fed through press releases.

There ought to be enquiries, information and full public explanations, as Britain’s Mr Curtis full well knows, not just vague announcements and statements about “progress and development”.

Because, we are not just talking phosphate factories.  We are talking aluminium and manganese smelters, an industry that has caused horrifying health problems in China, which seems to now be keen to export this dirty industry to…. well Sarawak. 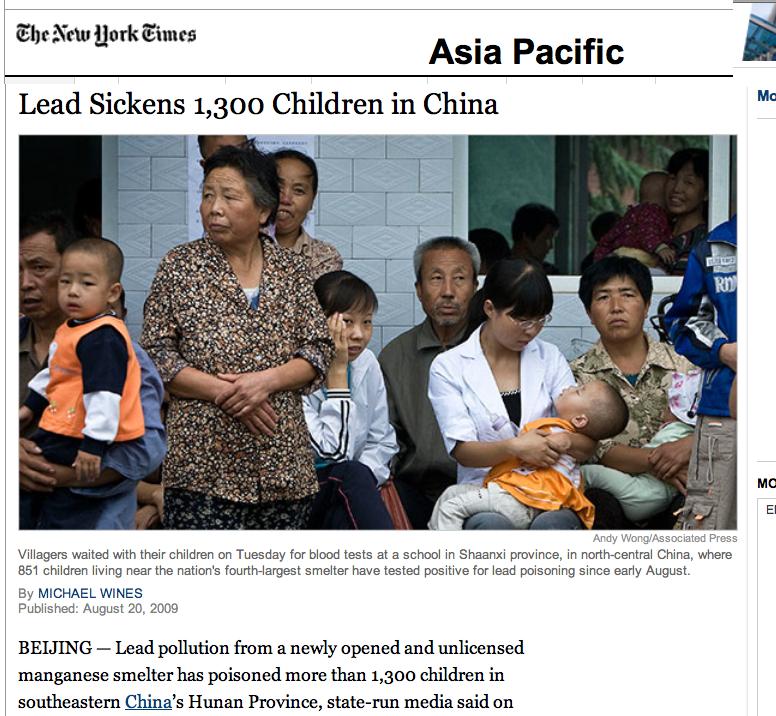