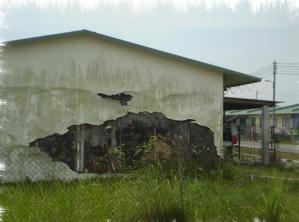 Question No 2 in the Frequently Asked Questions guide about their Modular Housing by Cayha Mata Sarawak Berhad (CMS) has an unequivocal reply.

In response to “What guarantees are given to the customer?” it answers “The structural integrity of the system is fully guaranteed and customers are furnished with a ten (10) year warranty”.

Such claims were not born out, however, when the first big storm hit the area just a few years later in 2009 and 80 roofs flew off, including plenty more damage to walls and structures.

Local people say the costs of repair were not fully born out and the incident fully illustrated how flimsy the company’s pre-fab structures are.

The false claims behind CMS’s so-called Modular Housing for the poor and the collapse of its “low cost housing” programme are the final, shocking outcome of a scandalous land grab, orchestrated by the Chief Minister for his family firm in Bandar Samariang outside of Kuching.

A decade on and the Taib family firm has attempted to put the so-called Modular Housing episode behind it, while it coins money from selling land it got for free in the name of helping the poor. 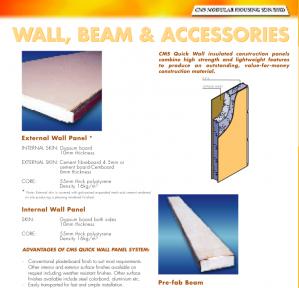 However, thousands of people in Bandar Samariang are still suffering from the ill-effects of CMS’s sub-standard housing.

And thousands more urban poor are still waiting for houses promised 15 years ago at the launch of the Bandar Samariang development.

Taib’s brother in law Robert Geneid was behind the project, in his role as Managing Director of CMS’s Property Development Division.

In a blatant conflict of interest he and brother in law, CMS Chairman, Onn Mahmud sold the concept of Modular Housing, manufactured by their own company, Total Pride Sdn Bhd, to CMS for tens of millions of ringgit.

Geneid boasted that the brand new building fabric and construction technique (invented by a close family connection, who was paid RM2million for the patent) would 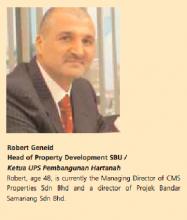 Yet the newly patented system appears to have been untested for such a purpose.

Despite the uncertainties, CMS brochures claimed the Modular Housing method could provide 5,000 homes, at a rate of over a thousand built in 21 weeks and that this construction was ‘superior‘ to established building methods:

“Conventional construction comprising masonry wall structure, roof trusses and metal sheet roof is susceptible to environmental deterioration. Moreover, the design life of a conventionally built house is difficult to quantify due to the inherent variability in materials and workmanship on each dwelling.  However, the CMS Modular Housing system has superior components which ensures consistent quality control and hence a guaranteed design life”. [Q 14, CMS brochure] 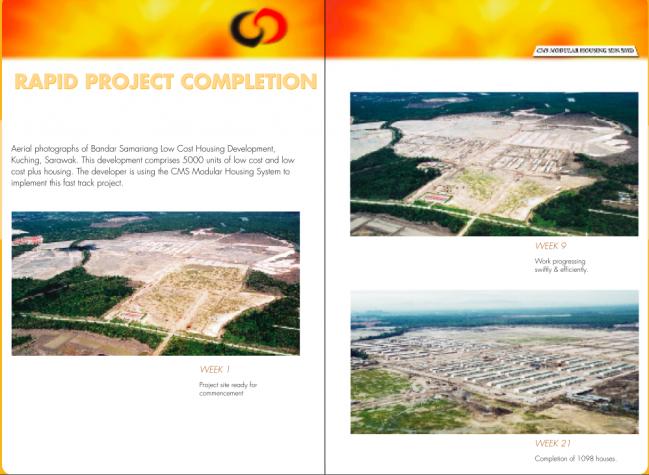 A thousand ‘homes’ in 6 months…

That these untried and untested caravan style habitations have none of the charm and beauty of the traditional homes of Sarawak goes without saying. There is no space for the community, like in a normal kampung.

However, neither did they turn out to have the superior house building qualities that had been claimed.  In fact these ugly pre-fabs have proved to be inferior to conventional housing on every count, despite being sold to poor buyers by the Housing Commission for up to RM35,000 per unit. 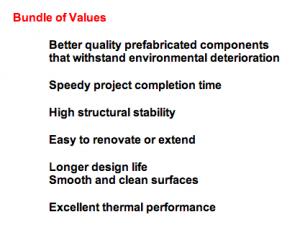 The pre-fabricated components of CMS’s Modular Housing initiative were manufactured in a factory set up by a private company owned by Geneid and his partners (a Lebanese, Australian relative and CMS Chairman Onn Mahmud) in Bako Road, called Total Pride Sdn Bhd.

This was later sold on to CMS and re-branded as CMS Modular Housing Sdn Bhd.

The fulsome claims for the strange product, which appeared to be a variation on caravan technology, give an impression of a tried and tested winning formula.

For example, the ‘Insul Roof” product was particularly promoted as being tough and structurally sound, as well as waterproof and needing “virtually no maintenance”

Designs and drawings enthusiastically littered out from the company stating the superior nature of the wonder concept.  The CMS publicity even claimed the caravan style dwellings were attractive! 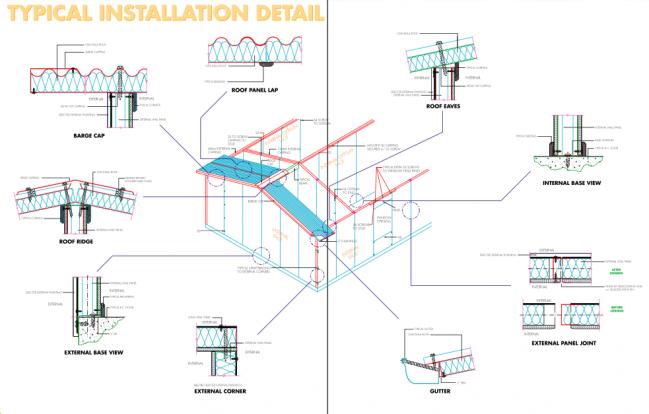 Two men can construct 160sq metres of wall in one day!

More importantly, according to the company, two men could hammer together 160 square meters of wall in one day for “fast, simple installation”.

While Geneid clearly was not prepared to accept a cheaper price for this product, it was claimed that this speed of construction was what created savings for the project.

Q3. What is the advantage of CMS Modular Housing System as compared to conventional Construction? 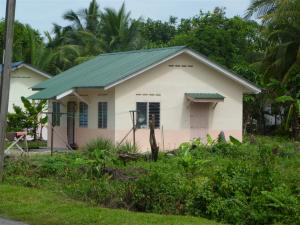 Box that claims to be insulated from heat.

Q4. Is the cost of the system lower than conventional construction?

A : The cost of system is comparable with conventional construction, but by taking into account the hidden costs involved in a project, substantial savings can be achieved by reducing financing charges and overhead costs resulting from more rapid construction time.

Middle back row – Geneid formed part of the line up of Taib family managers of CMS.

What goes up quick can come down quick

One other particular claim stands out in Mr Geneid’s list of questions and answers about the product invented by his  family contact Nabil Nazri.

Question 8 dealt with the matter of what happens in strong wind?  Since this product was entirely new, the confidence of the reply perhaps seemed foolhardy?

However, the lack of suitability of these squat and stifling little caravan constructions had become plain long before the wind hit in 2009, say insiders.  According to one source close to the project: 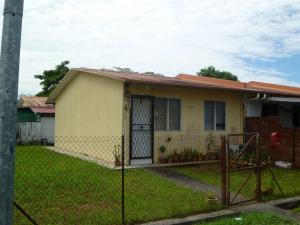 The claims made for CMS Modular Housing ‘Insul Roof’ are certainly as confident and positive as anything else in the brochure.

Summing up its promotion it describes the product as ‘unique’

“A unique insulated roofing and cladding system which has all the advantage of traditional insulated roof and cladding construction, but it is more economical; Easier and quicker to install; Energy efficient; Virtually maintenance free”

By the time the storm hit in 2009, blowing off 80 of these roofs, the uniqueness of the method was indeed assured.  It is unlikely that anyone else will ever purchase the formula and in 2006 CMS accepted the inevitable and closed down its once vaunted multi-million dollar modular housing factory project.

Robert Geneid had already resigned his position as Managing Director in 2005, having long since transferred the costs of Total Pride to CMS.

The full story was not told by CMS

But, while Geneid could move on to other projects, those poor families who had been encouraged to take up loans by the state in order to purchase the poorly constructed housing have faced nothing but problems. 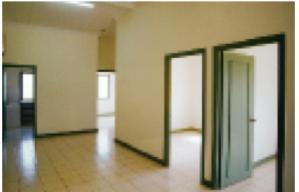 CMS refused to acknowledge that faulty design was the cause of the problem that saw 80 roofs blow off in one night, and so the proud guarantee was never fulfilled.

Locals say there was some money handed around in the aftermath by the government, but not sufficient to cover repairs.

Meanwhile, the poor quality of the constructions with flimsy interior walls made of plywood and even asbestos has often resulted in breakages even before the occupants move in.

The biggest problem for many of the local people here has been hanging on to their houses in the face of unsympathetic treatment by loan companies and the State Government’s own Housing Commission, which encouraged these poor families to invest in the first place. 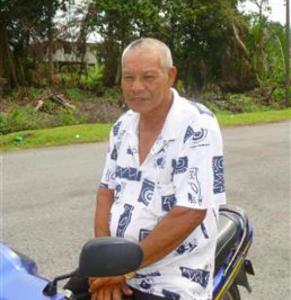 Resident Pak Aziz – in his 60s he is struggling to finish his payments on the 20X20 home in Bandar Samariang, The deeds have been withheld, so he cannot even sell out!

The low cost housing has been targeted at the poorest communities with least secure jobs and incomes.

It means they are paying interest and the eventual cost is around RM50,000 a home for these families.

Yet time and again the Housing Commission has proved heartless and ruthless when families find themselves unable to pay their dues.

Numerous vulnerable people have simply been turfed out of their homes, even during the period after the storm when they were facing enormous costs trying to repair the damage to these flimsy structures.

It is doubtless very hard for the cosseted and pampered members of the ruling BN party, who have grown up rich and who earn huge sums for very little beyond keeping loyalty to Taib, to understand how it feels to live on the edge of subsistence.

They prefer to assume poor people are lazy and wasteful, rather than contemplate a little more generosity towards impoverished buyers with mortgages to pay off. 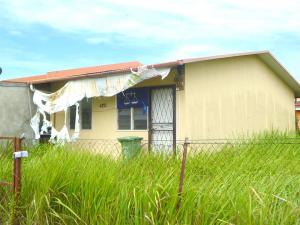 Indeed shortly after the 2009 storm one BN minister (now tipped as Taib’s successor) reportedly lectured the local people about owning cars and satellite dishes, while failing to take into account the lack of public transport into the area provided by his state government.

Numerous people who have paid their hard earned money for years have in the end lost their homes in Bandar Samariang because of this haughty attitude.

One of the most recent to be ejected was a family (left) who neighbours say had given over their house as a BN headquarters during the past May Federal Elections!

Elderly residents in the project are even more vulnerable.  One told Sarawak Report how banks refuse loans to older candidates. Because she is in her 50s and the husband in late 60s, the couple have been forced to obtain their loan in the name of somebody else.

“I worry that one day, after I finish the repayment, the “named owner” will not return the house to me”, she confided.

When asked  “What do you think of the claim that CMS developed the area out of generosity?” she smiled “ they do not care about us, we are poor people and they only want our money” 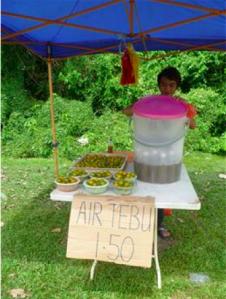 Struggling to make money – another resident of Bandar Samariang

The quality of the properties are abysmal says the resident, many had broken partitions or windows even before people moved in.

Neither have any of the promised basic amenities been provided by CMS:

“CMS promised to build a hospital/clinic, yet still there is no clinic or hospital. We have to travel to seek medical attention”

However, even more shocking has been the apparent abandonment of the promises to build a futher 11,000 homes for the poor in Kuching.

Because, with the demise of the modular housing initiative, CMS and its new Chief Executive, the British businessman Richard Curtis, appear to have decided to quietly forget the original commitment to help house Kuching’s poor and homeless.

Despite having been granted the vast development site on the specific excuse that the purpose was to benefit the poor, this Taib family company has now fully focused on high end housing and commercial properties.

Its 2012 Annual Report has bragged that the Bandar Samariang project looks set to generate RM474million for the Taib’s family firm over the next 5 years alone.

Yet there is no mention at all of the outstanding commitment to build homes for the poor! 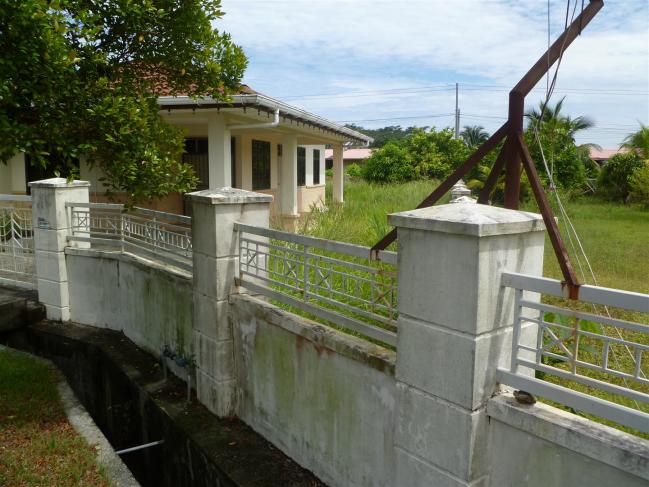