Sarawak Raised At UN, While Adelaide Students Protest Against Taib 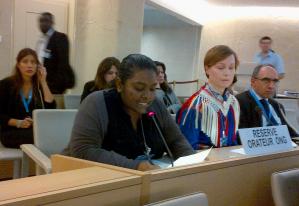 The Malaysian NGO Suaram has made a representation to the United Nations’ Special Rapporteur on Indigenous Rights, which highlights the ill-treatment of the natives of Sarawak.

The oral representation by Nalini Elumalai, the Executive Director of Suaram, called for the Rapporteur, James Anaya to be allowed to personally visit East Malaysia to evaluate the abuses by Chief Minister Taib Mahmud and also Musa Aman in Sabah.

Ms Elumalai highlighted a number of disturbing violations of human and indigenous rights across Sarawak, even though Malaysia has signed up to declarations to protect the indigenous people in its territories.

“The discrimination against indigenous peoples continues unabated in Malaysia”, she said. “Mr Anaya, Aliran is particularly concerned by the situation on the East Malaysian states of Sabah and Sarawak where indigenous peoples are facing forced displacement and loss of livelihood as a result of large extractive industries such as hydroelectric dams.” [Nalini Elumalai – Suaram Executive Director]

The Suaram spokeswoman made clear that this action is in complete violation of the principle of prior and informed consent, which is enshrined in the UN declaration that Malaysia has signed up to:

“With scarcely 5% of Sarawak’s rainforest remaining untouched, the state government is now strongly pursuing the multi-billion dollar “Sarawak Corridor of Renewable Energy” also known as SCORE, an immense industrialization project comprising plans for a potential of 50 hydroelectric dams, vast palm oil plantations, smelter and mining projects. This means confiscation of vast tracts of native land, and carries severe impact on the lives and cultures of indigenous communities in Sarawak who will be displaced as a result. Despite the threat of irreparable harm to their lands and their survival as a people, the government has failed to gain their free, prior and informed consent. The true scale of SCORE is unknown due to a lack of government transparency and affected communities”

And the NGO noted the impact of the leaked documentation that first appeared in Sarawak Report last year, pointing out how Malaysia’s official human rights commission, Suhakam, described the position of indigenous people as being “forced to become coolies in their own lands”.

Meanwhile, across the globe in Adelaide, students at the university were making their own protest against the decision to accept millions of dollars in donations from the Chief Minister, who has in return been awarded an honorary doctorate and had a slice of the university campus named after him. 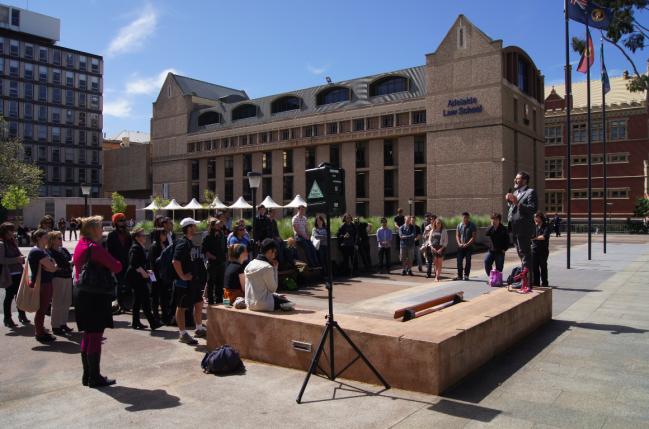 Sarawak Report has detailed Taib’s donations to the University and pointed out that the Chief Minister’s family also own the Adelaide Hilton Hotel and surrounding shopping complex.

We have questioned how he could afford such enormous personal investments and donations, given he arrived at the university as a poor scholar on a charity grant and has occupied modestly paid public positions ever since?

In response to an article in the Australian this week Adelaide University authorities clarified an earlier response made to students, where they suggested that they had only received one donation from Taib a long time ago.

In this first public statement the University acknowledged that the gifts ‘accepted in good faith’ have been multiple and “involve permanent trust obligations”:

“The university accepted gifts from Mr Taib in good faith many years ago. No gifts have been accepted from him for more than seven years.

“The scholarships and facility named following Mr Taib’s gifts involve permanent trust obligations and agreements with which the university is bound to comply.”

On behalf of the protesting students Lizzie Taylor of the South Australian Student Environment Network rejected the concept of such obligations.

“We hope that by students standing up against Taib Mahmud we have and will continue to raise awareness about who he is and why the University should not honour this man with a courtyard . We refuse to accept that our education is in any way funded by a man who is responsible for human rights abuses in Sarawak as well as the total obliteration of the native forests in Sarawak and through his family network company Ta Ann in our very own beautiful Tasmania” – Lizzie Taylor, South Australian Student Environment Network 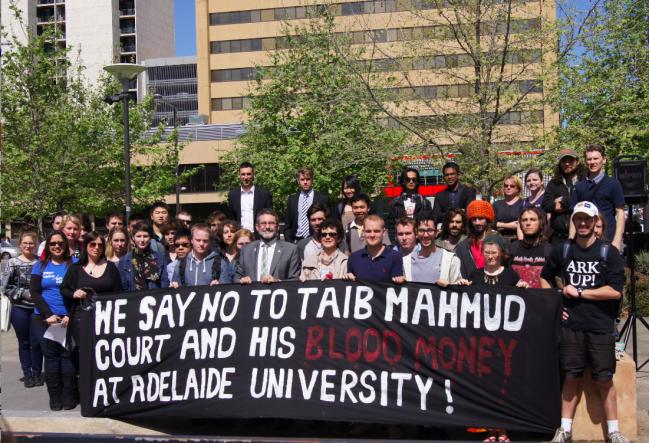 Time for more transparency? The students have yet to receive details of the “permanent trust obligations and agreements” entered into by the University with Abdul Taib Mahmud in return for donations of millions of dollars which he cannot legitimately lay claim to.

The Students’ Representative Council also made a statement rejecting the acceptance of donations from a man whose notorious personal corruption has wreaked destruction on the forests of Borneo and its people. 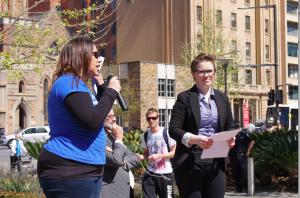 We don’t want Taib’s money, since it is not his to give

Discrimination and Denial of Citizenship

The concerns of the Adelaide students were eloquently put by Suaram’s UN team in Geneva the same day.

The NGO was concerned to highlight Taib’s deliberate marginalization of indigenous groups, who are deprived of their rightful vote, ID cards, health-care and schooling, even though their lands have been devastated by logging and oil palm.

These discriminations face many people in Malaysia, who do not stand to benefit from BN’s policies of unsustainable resource extraction, but who are denied any political opportunities to oppose them.

“Indigenous peoples in Malaysia also face a lack of equal rights accorded to them as citizens. Many indigenous people do not own an identity card, depriving them of access to basic services such as healthcare, housing, education, clean drinking water, electricity or the right to vote. The Penan of Sarawak, especially the interior Eastern Penan, have been systematically denied identity cards by the government.

A recently leaked study commissioned by the state government estimated that the replacement value of the forest for indigenous Penan communities in Murum is 75% of household income, and that the effects of logging have caused severe food security issues, leaving 31% of children malnourished and 12% seriously malnourished. Over 80% of the Penan in the area are without identity cards, only 2% of children attend school and all the communities are currently living below subsistence level.”[Suaram Report to the United Nations]

Decades of such discrimination have been allowed to take place on BN’s watch in East Malaysia and the result is that Taib Mahmud has become one of Asia’s richest men, while the indigenous people have suffered dreadful privations and hardship, their populations dwindling into virtual non-existence, like the animals and plant life of the Borneo Jungle.

The Malaysian Government was there to represent itself at the UN gathering and defended its position, saying it was seeking a “strike a balance” between the rights of indigenous peoples and “development”.  But, acknowledged there were problems and indicated it would try harder to ensure it fulfilled the country’s obligations to its people. 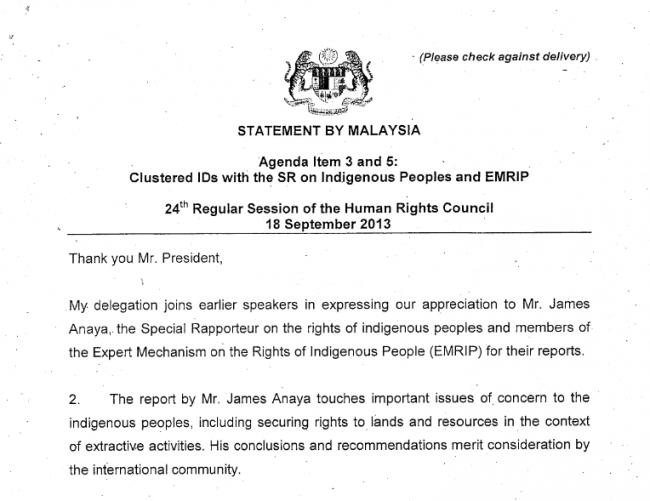 Statement by Malaysia insists that a “balance” is being struck- but who is benefitting from ‘development’?

Thanks to the principled actions of NGOs and protestors like the students of Adelaide University it will no longer be possible for Taib to continue with his activities unchallenged and unremarked.