Its Naughty And Dishonest Not To Resign Taib! 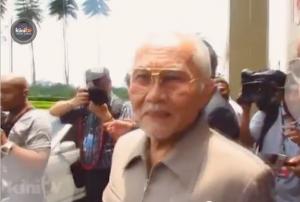 When questions like this are asked an honourable gentleman stands aside, until vindicated….. or otherwise!

This weekend the Malaysian Anti-Corruption Commission (MACC) made clear that there is a huge amount of information pointing to the fact that it is Taib who is extremely “naughty and dishonest”.

These are, of course, the words he famously used to describe the commission itself, when he was questioned about its investigations into his blatant and extraordinary looting of the state he is entrusted to manage.

In a press conference MACC spokesperson Lim Bee Kean explained that the reason why the septuagenarian kleptocrat remains un-prosecuted is that they have received such mounds of evidence and so many witnesses that it is taking them a very long time to get through it!

“There are many documents and many parties are involved as well as witnesses that are all over (the country),”[MACC’s explanation for the delay in prosecuting Taib]

Under such circumstances the only honourable step is to step down 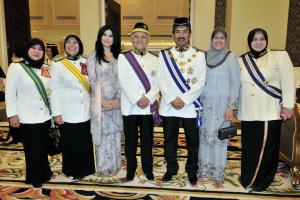 Now that the country’s anti-corruption investigators have confirmed that there is an on-going investigation and a large amount of evidence that they are taking seriously, there is only one route for a man of honour.

It is absolutely established convention in all civilised places that, when faced with such questions over one’s conduct, a person in public office should step aside until they are either proven innocent or convicted.

It is simply not acceptable to remain in post when the forces of law and order in your own country have acknowledged they have decided there is enough evidence to mount a full investigation.

But, of course, we are talking about BN’s sadly corrupted Malaysia and the Godfather of world timber corruption.  Instead of cooperating with the MACC Taib has had the utter cheek to instead accuse the investigators of being “naughty and dishonest”.

This weekend the MACC would not comment on whether Taib has yet agreed to be questioned.  However, his response to reporters recently provides the answer clearly enough:

Of course, Taib knows he can get away with swaggering about and accusing the forces of law and order for now, because politics are still on his side.

Najib remains in office, largely thanks to Taib’s election rigging in Sarawak and Musa Aman’s similar shenanigans in Sabah.  BN’s own cheating in West Malaysia has had even more light shone on it, given the relatively more open management. 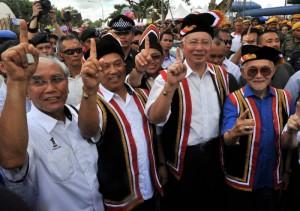 Najib and all Malaysia long to see Taib gone – but the PM sold out to the CM to secure an election win. Was it worth it?

It means that the timber crooks of Borneo are calling the shots and have packed their yes men into half the offices of state.

This is why the prosecution case against neighbouring state chief Musa Aman, long since delivered by the MACC to Najib’s office, is still gathering dust.

It is why Taib knows that the MACC will be similarly unable to mount a prosecution against him.

BN cheated in every possible way at the last election, abusing their public office to make sure their political party survived what would by rights have been an election wipe-out on May 5th.

They are now setting about raking off the last profits they can garner out of the public funds.

So, of course Taib will not take the honourable course.  Rather he will continue to act the complete gangster and defy the forces of law and order till the bitter end.

But, desperate gangsters eventually run out of time and Taib, the John Dillinger of Malaysian politics, is unlikely to prove an exception unless his old age catches up with him very soon indeed.