Down At The Airport! 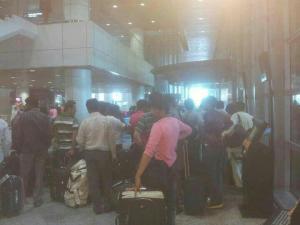 Charter flights laid on by BN friendly Air Asia from KK and Kuching – with hoards of Indonesian plantation workers on board…..

Down at the airport is where it is happening with the Malaysian elections right now.

Secret flights are heading out loaded with cash.

Meanwhile overloaded chartered jets are flying in crowded with foreign workers, suspected of being dragooned into voting for BN.

It would appear that the rats are leaving the sinking ship, while the PM is still desperately trying to win this election “at any cost”

Today, emails leaked to the opposition by staff working at both Air Asia and Malaysian Airways have left Najib Razak desperately exposed [see base of article].

They indicate that while his departing henchmen and rich businessmen have increasingly been losing faith that he can win this election, the PM has been caught red-handed trying to ferry tens of thousands of dubious voters over to KL to influence the outcome!

Staff insiders at Air Asia and Malaysian Airways have just leaked the devastating email interchanges, which lay bare the whole operation with both sets of emails implicating the Prime Minister personally in the extraordinary operation. 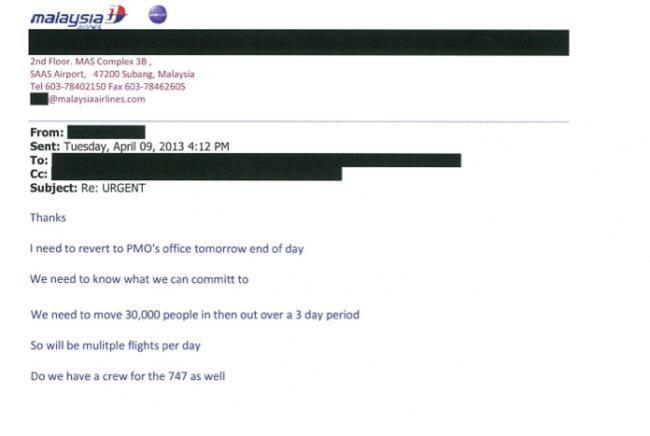 As his UMNO troops have started to desert in their private jets, can the PM survive this devastating exposure?

Because chartered jumbos are not the only unusual traffic that has been raising eyebrows.

Private jets have also been busy as rich Malaysians are getting their money out by whatever means it seems.  One the eye-witness account from air crew came through to Sarawak Report yesterday of:

“a private plane leaving Subang filled with a collection of luxury bags,and one large gunny sack stuffed with US dollars-estimated value RM 2.5 billion‬. Bags were dropped off by men in suits driving a couple of sliver Mercedeses , number plate “11”

From vote buying to vote flying! 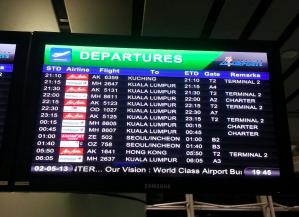 Photographed yesterday at KK airport in Sabah – corroboration of the leaked emails. 20 buses were used to ferry the passengers say eye-witnesses

As for the traffic moving in the other direction, PKR leader Anwar Ibrahim has come out tonight stating that his information is solid that these are foreign workers being ferried to KL to be used as ‘voting fodder’.

PKR have made clear that they believe that the UMNO supporting Election Commission (both the Chairman and deputy were card-carrying UMNO members) are registering them as new voters.

“The National Registration Department which issues I.C.s (Identity Cards) secretly issue these cards to the PM’s Office, which then gets undercover agents to recruit foreign nationals, who get their pictures taken and then superimposed on the I.Cs and then the Election Commission which is in charge of registering voters simply key in the data of these new I.C.s into their system. Voila! New voters!”

And today Najib indeed appears to have been caught red-handed, bringing in dubious workers from the two East Malaysian states to vote BN in marginal seats in peninsular Malaysia. 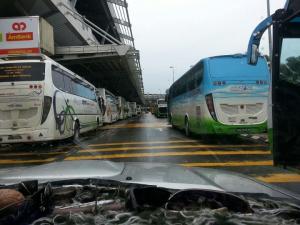 Major operation of ‘Vote Flying’ – first the coaches to ferry thousands to the East Malaysian airports and then charter flights.

The leaked emails indicate that the Prime Minister has been urgently coordinating the chartering of massive 747s to ship over 40,000 Indonesians or East Malaysians from Kuching and KK, airports, backwaters that normally never see the like of such aircraft.

The incriminating evidence is there in snapshots, emails and aircraft information that are currently going viral on the web.

Both the emails leaked from Air Malaysia and Air Asia indicate that the matter is being coordinated by the Prime Minister’s office.  One from Malaysian Airways makes plain that the chartered planes are to “ferry voters and election workers from BKE and KCH”.

Since when did these sleepy plantation states become packed with poor West Malaysian workers needing charter flights back to KL or indeed East Malaysians, who might be registered in West Malaysia and need to go back to vote? 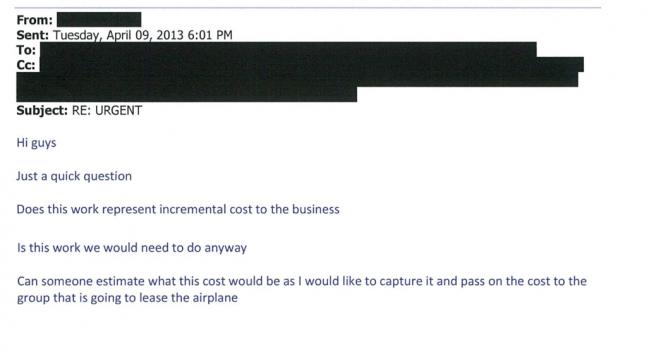 Pertinent ‘quick question’ from one Malaysian Airways exec – is the airline expected to carry the costs for this favour they are doing the caretaker PM?

Suspicions are now rife that many of these individuals may be foreign plantation workers, doing their masters’ bidding.

Meanwhile, the Clean Elections movement Bersih has come out in response to the news condemning ANY form of vote ferrying of this nature as illegal under the constitution.

“PROVIDING flights for voters is a clear breach of the Election Offenses Act, says Bersih’s Ambiga Sreenevasan, a former president of the Bar Council of Malaysia”.

Despite that illegality BN/UMNO have bowed to the weight of the evidence and admitted they are behind the ‘Vote Flying’, claiming they have some sort of justification in ferrying tens of thousands of East Malaysians over to the Peninsular for the election!

Party secretary-general Datuk Seri Tengku Adnan Tengku Mansor also said the flights were paid for by “friends” of Barisan Nasional (BN), Reuters reported this evening. He denied the accusation earlier today by Datuk Seri Anwar Ibrahim that the Election Commission (EC) and the Prime Minister’s Office (PMO) were involved in an operation to transport more than 40,000 dubious voters from Sabah and Sarawak to key states in the peninsula.[Malaysian Insider] 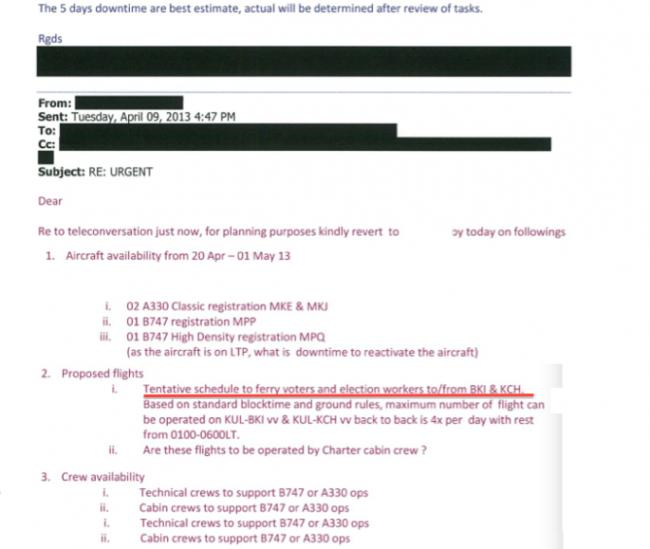 Moreover, while all names are obliterated from the Malaysian Airways emails, the ones from Air Asia show clearly who many of the key writers and recipients of the emails are. They include the Chief Executive Aireen Omar.

See this smoking gun email below from Omar with a second reference to the need to report back to the PM herself!  (full evidence via link is available at base of page) 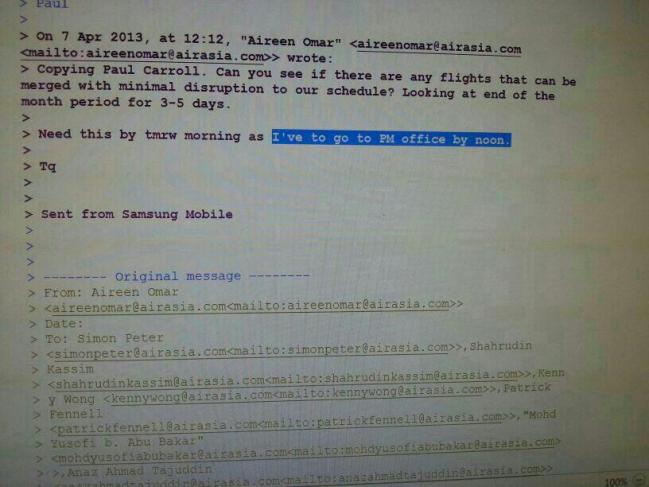 Can you let me know about flight availability by tomorrow morning as I have to see PM at noon!!!

One wonders how BN has the brass necked cheek to pose as the party of ‘stability’ when it indulges in such grossly provocative acts as this plan to plane and then bus thousands of foreigners to the polling stations of such places as Selangor on Sunday? 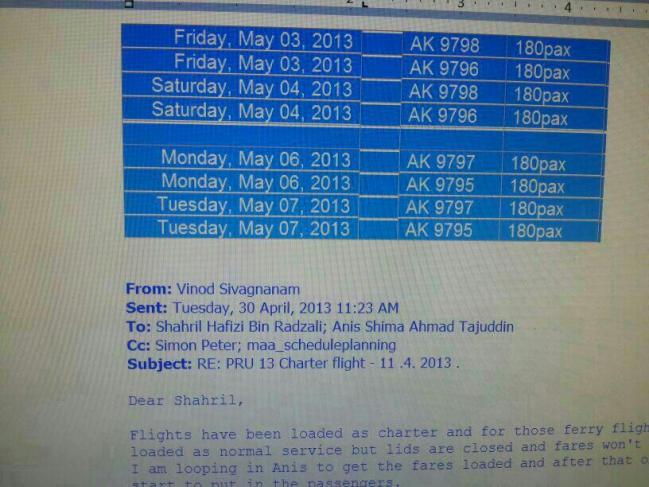 Charter planes arriving just before the election and leaving straight after! Is this what BN mean about ‘winning’ back Selangor at any price?

And how typical of the two corrupted BN tyrants of East Malaysia, Chief Ministers Taib Mahmud and Musa Aman to cooperate in such a scandalous activity. 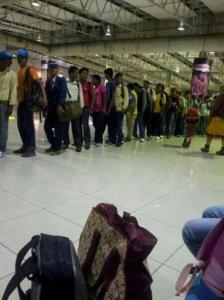 According to airport insiders the charters have already started ferrying helpless plantation workers, who do what they are told to do

Both men are exposed up to their necks in graft, with billions in kickbacks firmly labelled against their names.  Therefore both are desperate to do what they can to save Najib who will protect them for as long as they can provide BN the seats he needs to keep power.

40,000 plantations workers on a plane by the weekend to vote in Selangor?  Why not!

Sabah’s Project IC is the direct comparison.  Then UMNO ‘legalised’ foreign nationals to steal the East Malaysian state from its native voters.

Now it appears they are flying those workers over West Malaysia to steal their states too!

Malaysian air crew speaking to journalists at Heathrow airport had this to say Tuesday morning:

“Was at Heathrow on Tuesday and met some senior aircrew. They claim that Najib is using MAS old 747s (the ones which were old and replaced by the new A380s) to fly foreigners in from both KK and Kuching…..  there have been several of these flights over the past weeks”[UK journalist].

As per Tony’s email!

The involvement of the Chairman of Air Asia is also plain in this trail of emails.  Tony Fernandez (now world famous as the owner of QPR Football Club) is the BN client and supposed ‘whizz kid’, who went from nowhere to the head of a major airline in a twinkling of an eye having caught the eye of Mahathir some years back.

He clearly owes his political allies some loyalty: 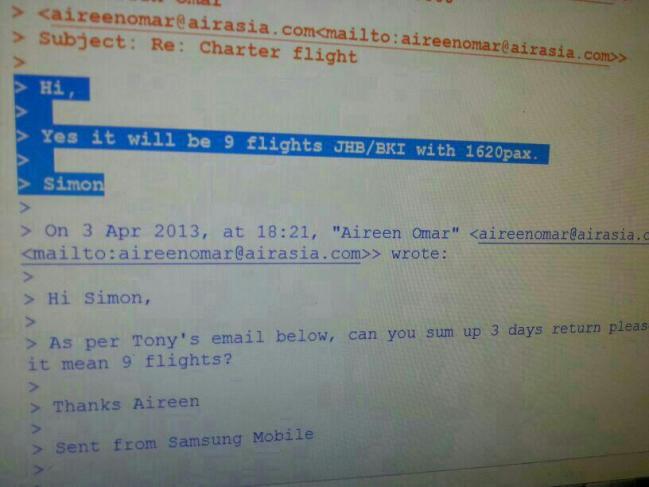 Air Asia, which is hand in glove with the Malaysian powers that be, needs to come out and explain each of these flights immediately – and the role of the PM in organising them

Today Anwar Ibrahim released this compelling evidence of the ‘vote flying’ in an urgent press statement followed by a release of the evidence that BN are now being forced to struggle to explain.

Get to the airport and photograph the disgraceful activity!

Worrying crowds – Are BN also Buying up Bangaldeshis as their traditional crowd fodder melt away? 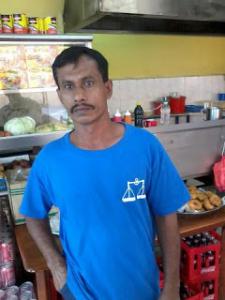 Promoting BN, but is he Malay?

There is another issue that has been gaining attention across the blogs.  Concern has grown that BN has been paying a different section of Malaysia’s community of foreign workers to perform another aspect of its election strategy.

This is crowd buying.

BN’s oil flushed, timber flushed solution to all its problems for the last 50 years has been “if you need it, buy it”.

And in this election it seems that as it has become harder to buy up their own Malay supporters for the party, they have started to pay poor immigrant cheer leaders to wear their T-shirts and wave their flags.

Meanwhile, the real UMNO troopers are concentrating on getting their money out of town.

The level of graft of by the ruling elite, which is currently pouring its money out of KL and into foreign safe havens has been causing even the banking community to feel sickened at the sight, according to insiders who have confided to Sarawak Report.

Follow the money to see what a growing number of panicking UMNO bigwigs think the outcome of this election will be.  Last year as many Malaysians as British nationals bought property in Central London. One told a London estate agent before Christmas:

“I will buy any property you have in Central London on your books.  I need to get my money out as there is to be an election in Malaysia soon and the next government may be stricter about people like me taking out money like this!”

But, while BN’s henchmen are starting to run round like disturbed ants, there is one man who is determined that the party should win this coming election and that is the PM Najib Razak, whose pride depends on success. 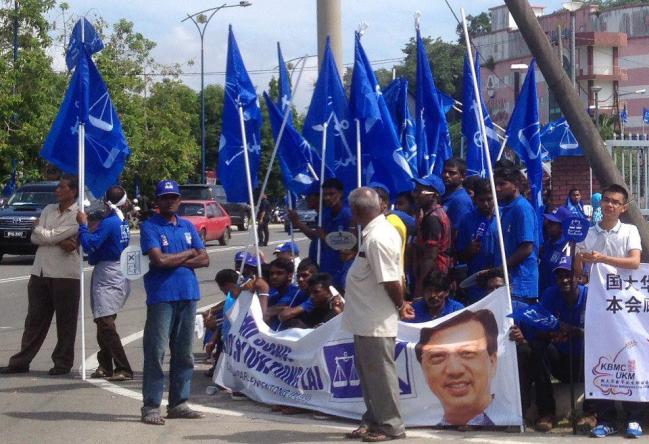 Who can blame these people if they have been asked by their bosses to wave such flags for a small sum?

And if that means shipping in tens of thousands of foreign illegal voters and putting tens of thousands more into BN T-shirts all to con an election from his own people, then it seems he is prepared to try and carry it off.

But Najib’s actions are being watched by the entire nation now and they are likely to do far more damage than good to his cause of winning this election “at any cost”.