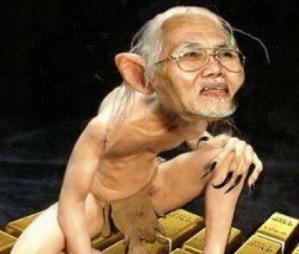 How Taib is being increasingly depicted by bloggers – as Greedy Gollum

Plainly greed has so over-powered the Chief Minister that he has ceased to care about the blatant nature of his constant grabbing from Sarawak.

The latest daylight raid was announced yesterday with the granting of the 4th big project in his so-called SCORE development master-plan.

SCORE (Sarawak Corridor of ‘Renewable’ Energy) involves flooding much of Sarawak to provide hydro-electricity for factories, which the Chief Minister clearly intends should be largely owned by him.

Daughter Hanifah gets the latest prize

Yesterday’s news was that the joint venture company Iwatani-SIG will go ahead with a plant to supply liquid gases to customers in Sarawak, Sabah and Brunei, based in Taib’s proposed new ‘Industrial Zone” at Simalajau.

However, they failed to make mention that the Malaysian side of this consortium is substantially owned by Taib’s younger daughter Hanifah. 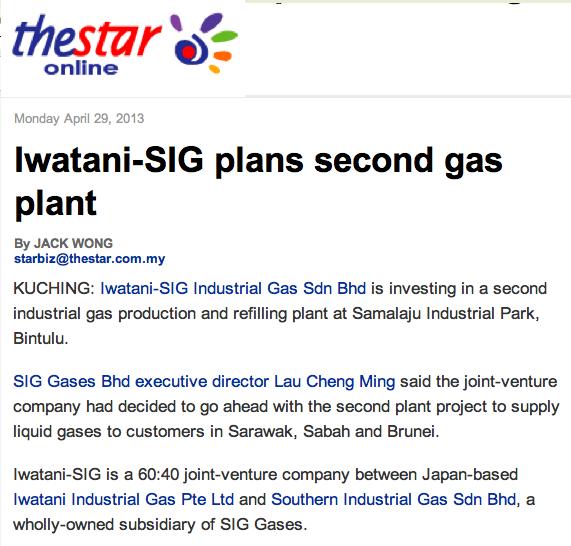 In fact the Iwantani-SIG is a classic Sarawak-style ‘Joint Venture’ company, comprising 60% of the key provider and 40% a Taib family company, without whose involvement licences would not be granted.

Taib attempted to set up a similar joint venture between CMS and Rio Tinto Alcan at Simalajau (before we exposed the embarrassing corruption of the deal and the Australian based multi-national pulled out).

The other major development at the site, OM Holding’s proposed manganese processing plant, has also handed a sizeable chunk of shares over to CMS in the business and has engaged Taib’s company KKB Builders to do most of its construction work. 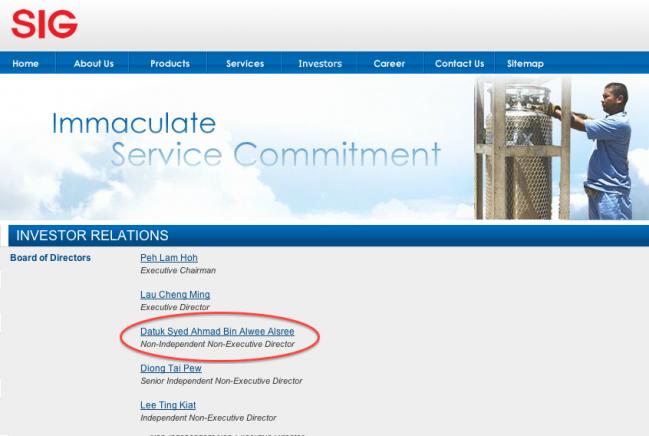 Bringing in her husband to manage her valuable asset

Hanifah’s involvement in SIG is plain to see.  Her husband Ahmad Alsree Alwee is one of the Directors and she is a major shareholder! 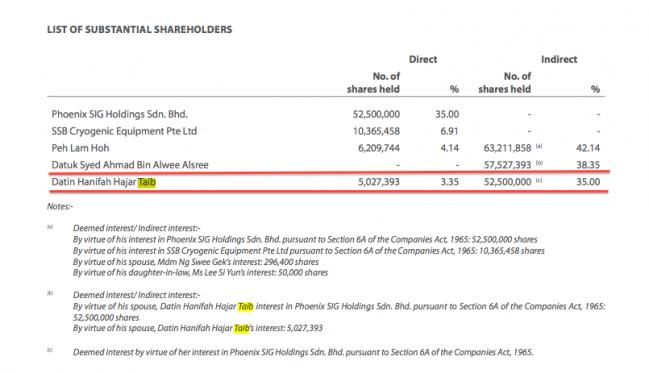 Malaysian style ‘public company’. Nearly half owned by the MD and a third owned by the daughter of a Chief Minister, Taib Mahmud (with her husband on the Board)

Hanifah not only owns a slab of shares in her own name, but she is the half owner of the biggest shareholder company called Phoenix SIG Holdings Sdn Bhd.

Taib’s younger daughter, like her sister Jamilah, is also of course the fortunate owner of major shareholdings in numerous other Sarawak companies, including around a quarter of CMS (Sarawak’s largest conglomerate and almost entirely owned by members of the Taib family) and the newspaper Sarawak Tribune.

All in all Hanifah has holdings in 74 Sarawak Companies.  Her husband has also been given a key position on the Board of CMS to keep him busier still. 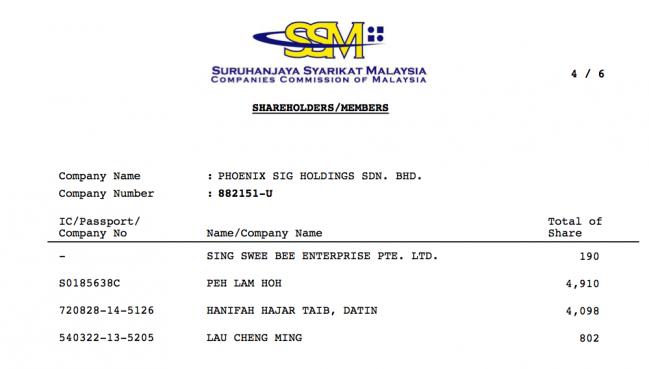 Phoenix – half the shares to the company MD and half to the Chief Minister’s daughter. This is how businesses get contracts in Sarawak. 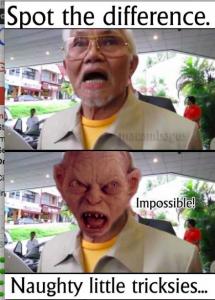 With such a state of affairs it has become increasingly impossible for Taib to convince anyone that the driving motivation behind his insane plans to flood his country and turn the world’s most precious jungle into an industrial park is the desire to ‘bring development to the people’.

This is even more the case because in fact few of the jobs involved are going to local people.

Taib and his ministers have been trawling India looking for employees there instead and announcing plans to bring hundreds of thousands of outsiders into the country to manage his grand schemes for industrial output.

What good is that for the local people, who so far have received nothing but pollution, flooding and the loss of their lands as a result of this project?

Taib first destroyed the jungle, he then took the land for oil palm and acacia plantations.  Now he wants to flood the remainder and create a concrete jungle in the place of Sarawak’s once beautiful and abundant rainforest.

So, is it any wonder that Sarawak’s Chief Minister is increasingly becoming depicted as Gollum by local bloggers.  This is legendary character from the Lord of the Rings, who became consumed and destroyed by his own greed.

Who can he blame for that but himself?