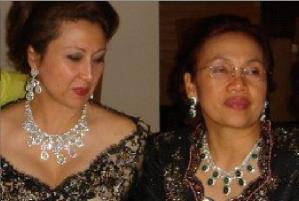 A loss-making Taib family company with share capital of just half a million ringgit was granted almost RM2billion in loans last December by the Malaysia Development Bank (PBMB), which is run by the Ministry of Finance using public money.

The astonishing revelation is made all the more shocking by the fact that the Sarawak Chief Minister himself has a substantial shareholding himself in the obscure company, KP Mukah Development, which only registers half million ringgit in assets.

Sarawak Report risks being scolded once more for being “naughty” by Taib, in suggesting that this extraordinary and risky loan of public money to an insubstantial company owned by himself and his family should form part of the on-going investigations by the Malaysian Anti Corruption Commission (MACC).

Given the MACC was itself also branded “naughty” and “dishonest” by the multi-billionaire politician last week for confirming that his affairs are indeed under investigation and he also called the respected international anti-corruption NGO, Global Witness “sneaky” and “linked to the opposition”, Sarawak’s top politician is fast diminishing into a figure of fun.

However, there is growing concern at the sheer scale of the wealth that has disappeared from Malaysia’s public finances. 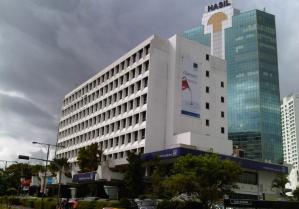 The name of this private limited company appears to be derived from Kumpulan Parabena Sdn Bhd, which is the 100% owner of this subsidiary venture.

The parent company has been the vehicle for numerous state contracts and concessions and it is run by Raziah Mahmud as part of a cluster of companies, through which hundreds of millions of ringgit of public money and state lands have passed.

Why she receives these concessions is unclear, since her companies are not equipped to do any building or construction work or to manage plantations.  They merely pass contracts on to others at a substantially lower price in what appears to be a case of blatant and obvious corruption.

After all, the shareholders of Kumpulan Parabena are a number of companies owned by the Taib family, including one named Miri Properties.  Miri Properties is owned once again by Raziah and her husband and also by a company called Mesti Bersatu.  And one of the main owners of Mesti Bersatu, along with other family members, is Taib himself! 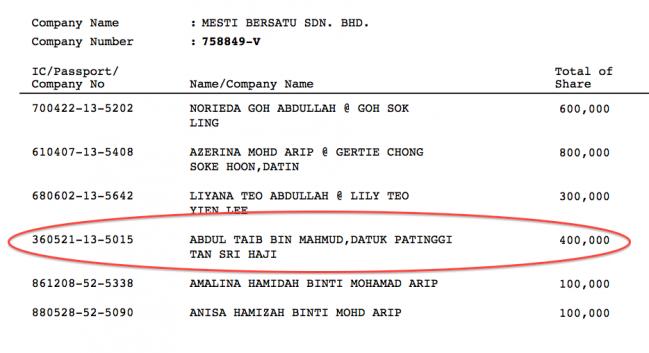 There may be four layers of company ownership to conceal it, but Sarawak’s Chief Minister has a stake in this RM2billion loan financed by public money.

KP Mukah Development is owned by Kumpulan Parabena, which is largely owned by Miri Properties, which is substantially owned by Mesti Bersatu in which Taib has many shares alongside other family members. 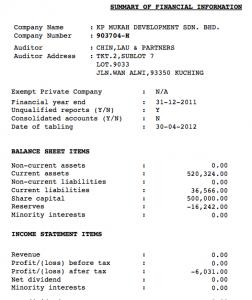 Is it responsible to lend RM2billion to a company with this balance sheet?

Given that no responsible bank manager lends to a company that does not have the assets to pay it back, the decision to put such a vast sum of money into KP Mukah Development seems inexplicable.

This loss-making company has, it appears, little more to its name than the value of one office building, perhaps its headquarters in Kuching?  In 2011 it owed thousands of ringgit and had declared a loss of RM6,031.

This is of course a pity as it means that this apparently struggling company would not have been in a position to contribute to the state in the form of taxes.

Meanwhile, KP Mukah Development Sdn Bhd has only ever announced one public activity. For an undetermined reason it was made the ‘concessionaire’ for a federally funded technology college in Mukah, and it promptly commissioned the established builders Hock Seng Lee to do the job for RM291million in July last year.

So, we ask again, why did the Ministry of Finance give permission for the Malaysian Development bank five months later to authorise six huge identical loans of RM 311,198,700.00 to the company on Dec 3rd last year? 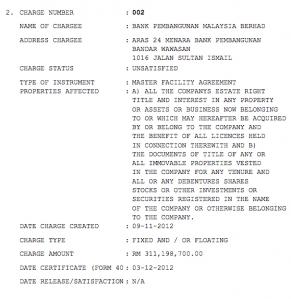 The second of the six identical loans, all fixed against the same total one million ringgit worth of assets and share capital owned by the company

According to charges registered against the company the total sum,  just under RM2billion, is several times greater than the cost of the technology college KP Mukah Development commissioned HSL to build.

As part of his sudden string of recent outbursts, the normally secretive Taib challenged Global Witness to a rare public debate.

Should the NGO manage to hold him to it perhaps they could ask him why his company raised this loan?

The RM1,900,000,000 public loan mirrors a previous startling bank loan of RM800,000,000 made to another of Raziah’s companies, Kumpulan Construction, which we revealed some months ago.

It is surely troubling that banks are willing to hand such enormous sums of public and investors’ money for no apparent reason to companies owned by the Taib family on the basis of no identifiable security?

In the absence of appropriate transparency the public is left to speculate.  Has some vast and unidentified concession been conferred by either Taib or his political allies onto his own company perhaps?

If so, why has this not been announced and examined for conflicts of interest?

Clearly, an immediate explanation is owed to the people of Malaysia’s whose money has been put at such risk by their government and by Taib’s BN colleagues in the Ministry of Finance. 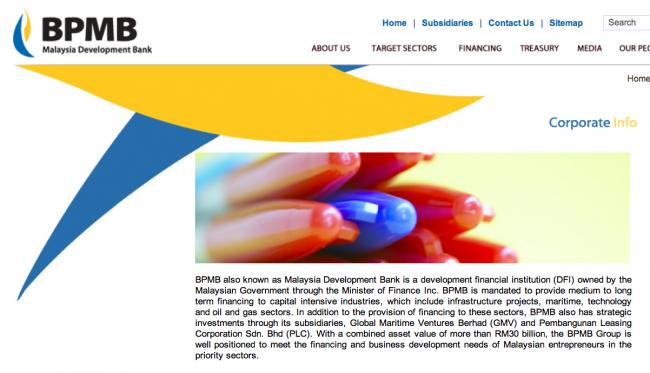 Consider the scale of the outlay.  The entire asset value of the Development Bank is RM30billion, supporting money which is supposed to go into infrastructure projects and large scale development.

This single loan to Taib’s family firm, a limited company, represents a whopping 6.6% of the total value of the bank for no specified purpose whatsoever and virtually unsecured!

What if this limited company were suddenly to fail and go bankrupt for example?  What security is there to claim back the money given over on behalf of the people of Malaysia?

This is a time when huge sums of money are flowing out of Malaysia’s public funds into hiding places abroad, leaving the country number 3 in the world league for for capital flight.

It is common knowledge that for the past year the fat cats of BN have been looking for ways to raid the public purse one last time and get the money out for themselves, in case the election goes against them.

They are siphoning the money abroad. The top US magazine Vanity Fair reported last month that more properties have been bought in London by Malaysian and Singaporeans in the past 12 months than by British citizens!

So surely ordinary Malaysians have a right to be concerned that huge loans of this nature might simply disappear when they are handed out to families like the Mahmuds?

The public deserves reassurance that if KP Mukah Development were to suddenly go bankrupt the Malaysian Development Bank has a guaranteed method for getting that RM2billion dollars back!