Taib Blames His Own Uncle And A Conspiracy To "Frame" Him! 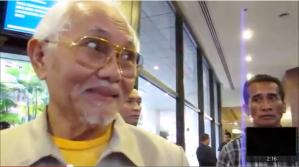 The strain on Taib was there for all to see yesterday, after the corruption video exposing his family and his entire regime went viral.

Speaking to journalists on camera yesterday a rambling Chief Minister attempted to appear jovial and easy-going, but his anger was barely concealed.

First he tried to gag the Global Witness, in his rebuttal the Chief Minister painted a complex conspiracy to “frame him” that seemed to defy all logic, as he accused the people who most benefit from his regime of betrayal.

Frequently wild eyed and returning back to the cameras after walking away, he even rounded on members of his own family, the daughters of his uncle and predecessor Rahman Ya’kub:

“You know that cousin?. . you find out what was the relationship between her father and me was it friendly or not? We were fighting one time, so that person cannot be my most trusted.. but up to you”, he lambasted as anxious aides tried to quieten him down and steer him towards his cream Rolls Royce.

The billionaire White Rajah of Sarawak had earlier tried to make out he was the vulnerable victim of an all powerful NGO:

“It’s a bit naughty of them. They are using their big power in order to blacken my name“, he whined, using his favourite term “naughty” to describe people who have exposed his blatant corruption.

Raking up the past – diversionary tactic? 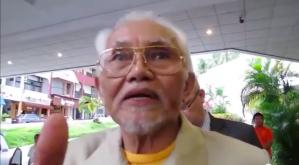 Heading for his rolls royce, but then turning back to accuse people of “trying to frame” him.

But in focusing on his legendary, but past, disputes with his uncle Taib had ignored most of the rest of the evidence in the video expose.

The point was that everyone in the video was saying the same thing, which is that Taib hands out the licences for everything in Sarawak and does it either to favour his family or to get kickbacks.

One of the families known to be closest to him in business, the Hiis, were also caught out in the video admitting that Datuk Hii Yii Peng gets all his licences because he is close to the Chief Minister and that he pays him 10% up front for the favour.

“I [Taib] say I award you this licence, in return you are grateful to me, maybe he say I give you a percentage.. probably 10%.  He is selling for RM230 million” [Huang Lung Ong, Hii family lawyer] 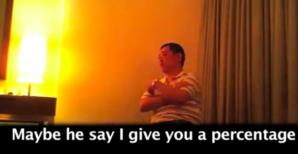 Did the Hii family join this ‘conspiracy to frame Taib’ or were they just indiscreet to someone they thought was buying the NCR land Taib had handed them?

The person speaking was Hii’s own nephew, who was the family’s lawyer negotiating the sale of NCR land, which had been confiscated and given to them by Taib.

Did the Hiis also join the conspiracy to bite the hand that feeds them?

And what about the lawyer Alvin Chong, who benefits from numerous jobs linked to the Chief Minister, including representing the Land & Survey Department?

Chong could not stop talking about all his methods for cheating and avoiding tax and, like his employers the Rahman Ya’kub sisters, he made clear that this is how land sales are handled all the time in Sarawak.

Singapore, explained Chong, was the place everyone likes to get paid for such deals, because it is safe from the prying Malaysian tax authorities who would notice the profit being made between the peanuts that Taib charges for the land on behalf of the people and the State of Sarawak and the amount that his friends and family can then sell it on for.

“Singapore is the new Switzerland. The jurisdiction for people like us”, says Alvin Chong, “I put it to use many times” 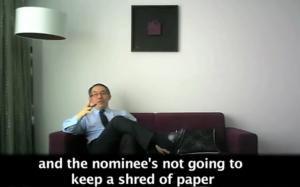 Trade secrets – was trusted lawyer Chong joining the ‘conspiracy to frame Taib’ or just being a blabbermouth about his clever ways of getting around tax?

For these reasons Taib’s angry reference to the ancient rivalry with his uncle seems a clear attempt at distraction.

What is relevant is the cause of the conflict, which broke out when Taib took over his uncle’s position in the 1980s and immediately cancelled all the equally corrupt timber licences, which had been handed out by Ya’kub to his own family and supporters.

Taib just made sure that the new licences favoured him and his own cronies instead, while making a great play of getting rid of corruption and saving Sarawak’s forests.

If Taib’s own protege Awang Tengah, succeeds in taking control Sarawak right after the election (as we have revealed he is plotting to do) we can expect to see a similar cancelling of past favours and the issuing of new ones.

The biggest lie in all that Taib said yesterday was his simple claim that everything is done not by back room deals in Sarawak, but by open and lawful procedures:

“I don’t believe in deals, everything has got to be done according to government procedures” [Taib]

But, as everyone knows, all contracts and licences in the state are negotiated behind doors without open tenders and end up in the hands of Taib’s family, proxies or cronies! 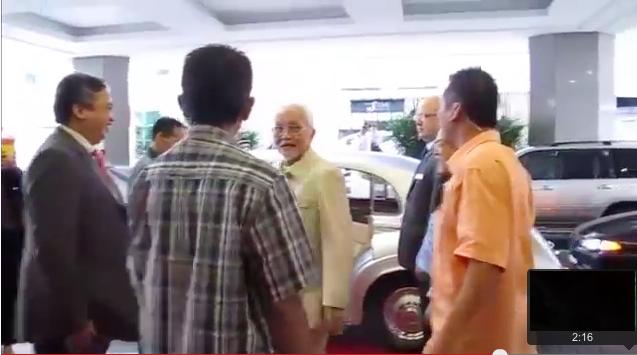 No deals, just ‘government procedure’ – so how did you afford all your Rolls Royces from a life-time on state salaries Taib?

Taib is a lawyer and he has made clear that even after 30 years of graft he still knows how things ought to be done.  But, he is convincing no one but himself if he thinks people believe that is how things are done in Sarawak.

This is why everyone, including top lawyers like Chong, speak so openly about the corruption of the system under BN.  After all, how could anyone like him get away with his outrageous land deals and tax dodges if Taib himself was not turning a blind eye to the robbery against his people?

Time for fresh government to clear things up?