Reuters Adds To the Questioning Over Taib's Mad Dam Plans 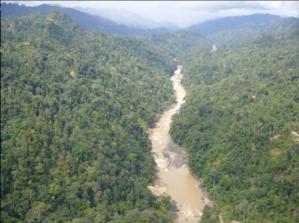 Daming the river and taking the trees – of course

In its feature on the Murum Dam the recent Reuters article begins with the observation that at least 40 trucks an hour are dragging wood (on behalf of Taib’s crony company Shing Yang) out of the last remaining areas of Sarawak’s forests behind the Murum area.

According to the NGO Global Witness this wood is coming from an area that had been previously set aside to be a National Park for Sarawak.

Dec 14 (Reuters) – The trucks that ply the rough road to the Murum dam under construction in Malaysia’s Sarawak state kick up clouds of dust that obscure the trail and make driving treacherous. Within an hour, at least 40 of them go by, laden with freshly cut timber.

The dam on a tributary of the Rajang river is just the start of a staggeringly ambitious plan to block many of the state’s major waterways by 2020 to tap cheap energy and turn one of Malaysia’s poorest states into a Southeast Asian industrial and energy hub.

Leveraging energy from the state’s numerous rivers and what it calls a strategic location between China and India, planners envisage up to 12 dams by 2020.

But that could leave the state with more than 20 times more energy than it now needs and critics, including opposition politicians, say that Sarawak simply does not need so many hydro-power dams.

The plan is also attracting growing opposition from environmentalists and groups representing indigenous tribes, who say it is an environmental disaster in the making that will enrich an elite few.

Towering over the $110 billion plan – known as the Sarawak Corridor of Renewable Energy, or SCORE – is Chief Minister Abdul Taib Mahmud, a 76-year-old patriarch who wields sweeping policymaking powers after three decades in charge of the state.

“He runs Sarawak like a private business for his own benefit,” said Clare Rewcastle-Brown, who runs the whistleblower website Sarawak Report and is the sister-in-law of former British Prime Minister Gordon Brown.

“Taib seems determined to empty out whatever forests are left, turning the state into a drab industrial estate.”

Taib says the project will generate high-skilled jobs and help transform Sarawak, on Malaysia’s side of Borneo island, into the country’s richest state.

The state chief, who also serves as the state’s resource planning minister and finance minister, has been under a Malaysian anti-corruption agency investigation since 2011 but no charges have been brought. His huge influence in Sarawak makes him a key ally for the ruling coalition ahead of an election next year that is expected to the closest in Malaysia’s history.

Taib denies allegations of wrongdoing and his office did not respond to repeated Reuters’ interview requests. The chief minister, whose chauffeured Rolls Royce is a common sight in Sarawak’s capital, Kuching, has said his family’s wealth is a result of its business acumen.

“You can see how much progress Sarawak has made during his time,” Mahathir Mohamad, Malaysia’s former long-serving prime minister, told Reuters in an interview.

“He wants to develop more power there but he has been active in selling power … he’s bringing a lot of industries there.”

The wave of dam-building in Sarawak has brought more scrutiny to links between environmental damage in Malaysia’s two Borneo island states and global financial institutions.

Global Witness, a British-based investigative group, has criticised HSBC Bank’s role in funding companies it said were logging illegally in Sarawak, saying it was against the bank’s environmental guidelines.

HSBC declined to respond to a request for comment.

Swiss prosecutors opened a criminal investigation into UBS in August after the bank was accused of laundering money from illegal logging in Sabah, another Malaysian state that borders Sarawak. UBS has said it is cooperating with the prosecutors.

At the heart of the plan for Sarawak is attracting foreign companies, through cut-price power and low taxes, to set up energy-intensive industries such as aluminium smelting and steel production.

The state says it has secured investments of 29 billion ringgit from companies from various countries including the United Arab Emirates, Australia, Hong Kong, Japan and Malaysia. A total of 334 billion ringgit of investment is expected by 2030.

Stressing its environmental credentials, the project’s website shows a picture of an indigenous tribesman against a verdant background of plants and a waterfall.

That is in stark contrast to environmentalists’ fears that the dams could deliver a final blow to Sarawak’s forests, which they estimate have shrunk to 5 percent of land cover. The state says forest cover is 70 percent, but activists say it uses a broad definition that includes rapidly expanding palm-oil plantations.

When Reuters visited the Murum site in October, dozens of bedraggled villagers from the Penan tribe had been camped out for three weeks, blocking access to the dam that will flood their ancestral land in Sarawak’s remote northeastern corner.

“Never mind everything, the tiredness, the rain, the heat, we must do this,” said 36-year-old grandmother of nine, Layu Kara, between mouthfuls of the sticky sago palm paste and jungle fern that made up her first meal for the day.

The villagers, among 1,500 people who will be displaced by the 4 billion ringgit dam, were demanding compensation for their land. The next major dam in the works, Baram, will displace 20,000 people, say rights groups.

Chinese companies, some of which have been involved in other controversial hydroelectric projects, are building Murum and are in a strong position to bid for others. Sinohydro Corp completed Bakun and another Chinese company, the Three Gorges Corp, builder of the giant dam of the same name in China, won the bid to construct the Murum dam.

Critics of the plan question the strategy of producing an amount of energy that is far in excess of current demand, pointing at problems in finding buyers for power from the existing Bakun dam, completed in 2011, that flooded an area the size of Singapore.

State energy company Sarawak Energy Berhad says it already has buyers for all of Murum’s 944 megawatts (MW) of energy and a “long queue” of potential customers for future projects.

Sarawak Energy, which is awarding many of the project’s contracts, says it also plans to sell energy to peninsula Malaysia and Brunei, as well as to Sabah and Kalimantan, in the Indonesian part of Borneo.

But it lacks those grid connections, and a planned undersea cable to the energy-hungry peninsular was abandoned in 2010.

The Bakun dam is capable of producing 2,400 MW, well above the state’s current needs of about 1,000 MW. The project was labelled a “monument to corruption” by the Transparency International group.

In a blow to Taib’s plans, Bakun lost what would have been its biggest customer in March when Australian mining giant Rio Tinto pulled put of a plan to build a $2 billion aluminium smelter, blaming a disagreement over pricing.

Sarawak Energy says the 1,500 villagers displaced by the Murum dam will be suitably resettled and given land they can cultivate. It hasn’t reached a deal on compensation.

The Penan villagers in the Murum blockade were prepared to wait, within sight of the forests that have been crucial for their food and income.