So Who Is Taib Calling Liar? 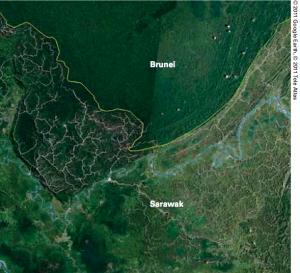 Last year Mahmud made a big fuss, calling Sarawak Report liars for drawing attention to the fact that he has destroyed nearly all of Sarawak’s rainforest.

We had said that less than 5% of the primary jungle remains and even that is now being cut down.

But the Chief Minister went on record to deny it and claimed that over 70% of Sarawak’s rainforest remains virgin and untouched!

If it were not so sad it would have been a laughable claim.

However, Taib and his flunkeys have gone on to try and claim that satellite information and international statistics support his ridiculous percentages and that Sarawak Report has been “wrong”.

His brother-in-law the greedy Robert Geneid, who took hold of Mulu and who has benefitted from huge concessions of former forest land, has even set up is own Foundation ‘in support of the environment”.  Is that their idea of a family joke?

However, Taib is finding it hard to find anyone credible to support his position. To the contrary a growing body of international opinion has been developing in support of our criticism and concern over his rape of his own homeland and his abuse of his own peoples.

This is how the world’s most respected current affairs magazine The Economist has described the situation in Sarawak this week: 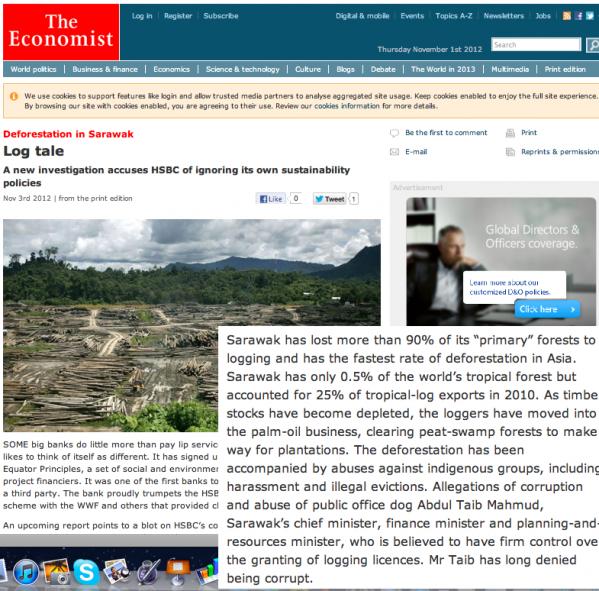 The article focusses on the fact that ‘green’ bank HSBC has been giving loans to Sarawak timber companies, despite the state’s appalling environmental record

“Sarawak has lost more than 90% of its “primary” forests to logging and has the fastest rate of deforestation in Asia. Sarawak has only 0.5% of the world’s tropical forest but accounted for 25% of tropical-log exports in 2010. As timber stocks have become depleted, the loggers have moved into the palm-oil business, clearing peat-swamp forests to make way for plantations. The deforestation has been accompanied by abuses against indigenous groups, including harassment and illegal evictions. Allegations of corruption and abuse of public office dog Abdul Taib Mahmud, Sarawak’s chief minister, finance minister and planning-and-resources minister, who is believed to have firm control over the granting of logging licences. Mr Taib has long denied being corrupt” [Economist Magazine 02/11/2012] 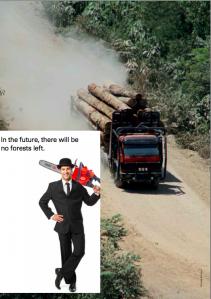 “In the future there will be no forests left”, report on Sarawak by Global Witness

So, is Taib going to complain the The Economist is telling lies as well?

The Economist article was based on extensive investigations by one of the world’s most respected Environment NGO’s into the situation in Sarawak, Global Witness.

Global Witness has now published the first of a number of reports into Taib’s destruction of the state.  It focuses on the hypocrisy of international lending institutions, who like to pretend they support good environmental practices and yet lend to Sarawak loggers e.g. HSBC.

“HSBC has bankrolled logging companies causing widespread environmental destruction and human rights abuses in Sarawak, Malaysia. It has earned around US$130 million in return and has violated its own sustainability policies. The bank is also providing financial services to companies widely suspected of engaging in bribery and corruption. This Global Witness investigation uncovers the role played by commercial finance in facilitating forest-related crime“.

So, is Taib going to complain that Global Witness is telling lies also? 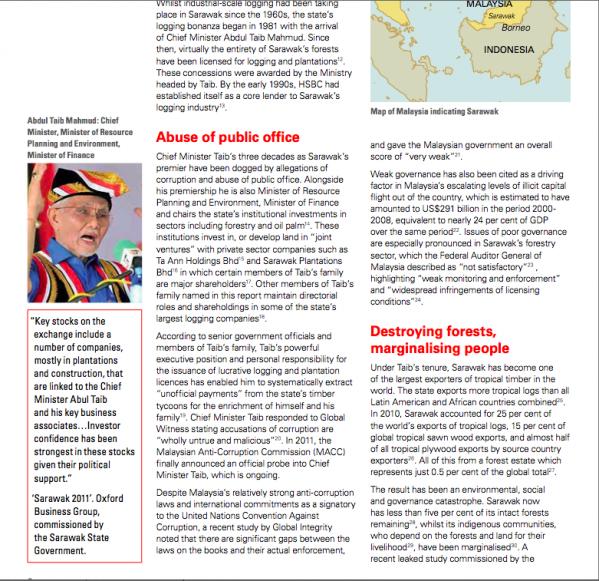 In its report Global Witness repeats all the criticisms and allegations against Taib that Sarawak Report has been drawing attention to and the NGO lays out some stark and shocking figures:

“Under Taib’s tenure, Sarawak has become one of the largest exporters of tropical timber in the world. The state exports more tropical logs than all Latin American and African countries combined. In 2010, Sarawak accounted for 25 per cent of
the world’s exports of tropical logs, 15 per cent of global tropical sawn wood exports, and almost half of all tropical plywood exports by source country exporters. All of this from a forest estate which represents just 0.5 per cent of the global total.

The result has been an environmental, social and governance catastrophe. Sarawak now has less than five per cent of its intact forests remaining, whilst its indigenous communities, who depend on the forests and land for their livelihood, have been marginalised.”  [Global Witness, In the Future there Will be No Forests Left]

Taib’s credibility in tatters as he faces ITTO next week

The Chief Minister could not have received a more stinging endorsement of all our criticisms and rejection of all his ludicrous eco-claims than this thorough analysis by Global Witness.

What’s more it has come at the most embarrassing possible time as Taib prepares to fly to Tokyo on Monday to give a rare speech on his logging record at the United Nations sponsored International Tropical Timber Organisation (ITTO).

The biggest driver of deforestation is not indigenous people it is corruption by greedy politicians like Taib and his timber tycoons, who are funded by banks like HSBC!

How is he going to defend his appalling and abysmal record in front of this audience of NGOs and experts who have been trying so hard to save the world’s remaining jungles?  Remember Sarawak has just 0.5% of the world’s rainforest and yet supplied more timber to the world market than the Amazon and Africa combined in 2010!

Most of this beautiful hardwood is turned into tatty plywood, when a less greedy form of logging would ensure good prices for good quality.

The Bruno Manser Fund, which has spent years highlighting Taib’s abuses and which launched the Stop Timber Corruption Campaign last year, has issued a challenge to the ITTO questioning why it has invited Taib to speak when this ‘Godfather of Timber Corruption’ has failed to implement any of the recommendations the ITTO itself made 20 years ago to make logging in Sarawak sustainable?

In a statement this weekend it says:

“We invite journalists and NGOs present in Yokohama to use this unique opportunity to quiz the Sarawak Chief Minister (who has avoided talking to independent media and NGO representatives for years) why his government never cared to follow the ITTO’s recommendations issued after its 1990 mission to Sarawak and why he never allowed the ITTO to return to Sarawak for a follow-up mission for over twenty years.

Taib’s talk might also be an opportunity to question the ITTO responsibles why they never seriously adressed corruption as one of the driving forces of tropical deforestation and why ITTO deems it right to give Taib Mahmud, the Godfather of Timber Corruption, an international platform.“[BMF statement]

Indeed one of the ways Taib has kept international criticism at bay over the past few years has been simply by using his favourite method of banning anyone he doesn’t like from entering Sarawak.  NGO’s who might be critical (including Sarawak Report) have been blacklisted.

Likewise, the autocratic Chief Minister/ Finance Minister/ Resource & Planning Minister has made sure there is no independent press in Sarawak, meaning he can say whatever he likes without being questioned or countered.

If Taib declares there is over 80% of the forest left, then that is what everyone is told to believe. No one dares to mention that the Emperor has no clothes!

Time to sort out this dictator who is himself the biggest liar of them all? [Gossip Section]

Delegates to the ITTO should take this opportunity to remind Taib that he is a deluded old man in making claims that 70%, even 80%, of Sarawak’s jungles remain untouched.

And maybe Ragad will deliver him another sharp kick in the shins before he leaves to wake him up to the realities?

After all, having lashed out at her husband in front of office staff at Wisma Bapa Malaysia on Friday 12th October, we now learn that Sarawak’s ‘First Lady’ was back publicly attacking him again in front of dinner guests last Friday evening!  According to reports:

“Ragad threw and smashed Taib’s head with her hand phone in front of many guests who came to his residence last Friday. Everyone left after the incident happened”.

Almost everyone in Sarawak can sympathise with Ragad’s feelings, but since they are a more peaceful people, they should consider the more effective and permanent way of shutting him up by voting against him at the general election! 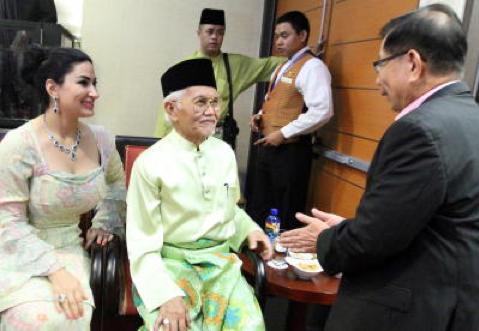 Old pals – this recent encounter with brother-in-law, former DCM George Chan, will have reminded Taib that even the ‘invincible’ can lose their seats. Perhaps it also came to mind how his son Sulaiman was well known for his brutal attacks on George’s daughter, before she left her husband.  Perhaps he has more sympathy for her situation now?