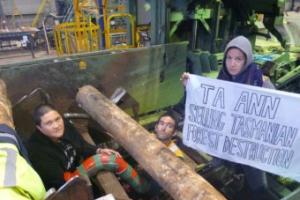 Dangerous protest. It takes guts to chain yourself to a saw mill conveyor belt!

The Taib family’s Australian company, Ta Ann Tasmania, is fuming because protestors held up their saw mills for some hours on Monday and again on Wednesday, by chaining themselves to the conveyor belts.

Ta Ann’s spokesperson claimed that the world should be “outraged” and that the passive male and female protestors from the group Groundswell were “bullying” the multi-national concern.

Really?  In which case there are many facts about bullying on the part of Ta Ann, involving armed gangs who intimidate village people in Sarawak that the world might also wish to know about – see Australia’s Dateline Programme Last Frontier .

What’s more, Ta Ann’s Jane Calvert geared herself up to threaten that because of such third party protestors from the community, the Forest Industry might once again sabotage talks to save Tasmania’s ancient forests. 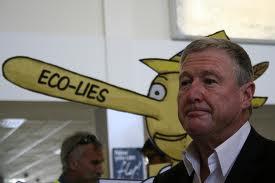 Deputy Premier, Bryan Green, who has a Ta Ann mill in his constituency, toured Japan asking buyers to ignore complaints that the company’s ‘eco-wood’ comes from Tasmania’s endangered primary forests.

Why should any responsible company allow protests by groups they term as “extremists” stop viable talks?

Yet Ta Ann made the same threats last year when they didn’t like being exposed for telling lies in their advertising.

The company had claimed that their wood products were made from environmentally friendly plantation wood, when in fact the wood is ripped out from Tasmania’s ancient forests.

At that time the company made clear that unless third party groups stopped mentioning such inconvenient truths, their political supporters, like Bryan Green, would sabotage the Forest talks, which have now indeed collapsed.

It is really time that Ta Ann’s whole series of misleading claims were properly challenged and put to a halt, since too often they are being too readily accepted.

This Taib family company, which as every Malaysian knows is one of the world’s largest logging concerns, has for a start made a very big deal of the fact that its subsidiary Ta Ann Tasmania is not physically logging in Tasmania, but has contracted the State Forester, Forestry Tasmania to supply their saw mills.

This is a flimsy attempt to deny responsibility for the damage they are causing to native forests, which is weakened further by the fact that the current Chief Executive of Ta Ann Tasmania is the former Head of Forestry Tasmania, who was responsible for negotiating the original contract!

According to the critics, the whole arrangement currently represents a major loss-making activity for Tasmania! 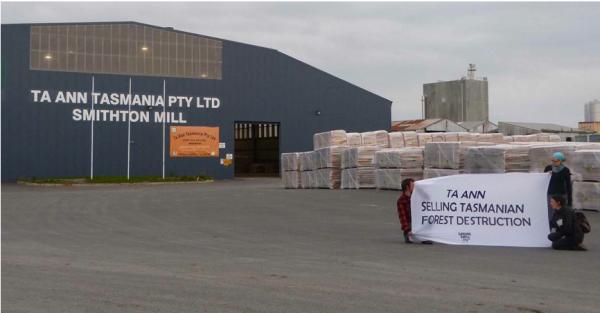 We aren’t loggers – we just put in our order and Forestry Tasmania logs it for us, so don’t blame Ta Ann.

If this excuse that Ta Ann are “not loggers” in Tasmania was not bad enough, there is another outrageous claim that Ta Ann has made time and again to try and give people the impression that their activities are doing nothing to harm the Tasmanian environment.

It is a claim they have now repeated in no uncertain terms in a statement to the press about Monday’s sawmill protest, giving the impression that they only use “regrowth” and “plantation” wood.

The statement said the company was no longer a logger, but a timber processor. “Certified sustainable regrowth and plantation logs are supplied by Forestry Tasmania to its mills from areas approved by the State and Federal Governments within the Intergovernmental Agreement (IGA) process,” the statement said.[ABC News]

To all intents and purposes this claim is deliberately misleading in the extreme.

Because, surely any normal person would immediately assume that a “certified sustainable regrowth log” was a tree grown in an area that had perhaps already been logged and was now being sustainably reforested for logging.  Wouldn’t they?

Surely no normal person would imagine that in fact in Ta Ann’s definition a “certified sustainable regrowth log” actually means a younger tree (around 40 years old) growing naturally in a wild pristine forest?

Surely that normal person would not for a second conclude that such a “certified sustainable regrowth log” could have been acquired by clear felling the entire pristine forest area around that wild tree so that this perfect sized log for the Ta Ann mills can be extracted?

Or that the rest of the destroyed surrounding forest (older trees and forest plants which were felled but not suitable for the Ta Ann factory, about 70% of the total) would then be torched so that the once pristine ancient forest area is left utterly destroyed?

As for plantation wood? Forget it! It costs double what Ta Ann can get the wild logs for from Forestry Tasmania. 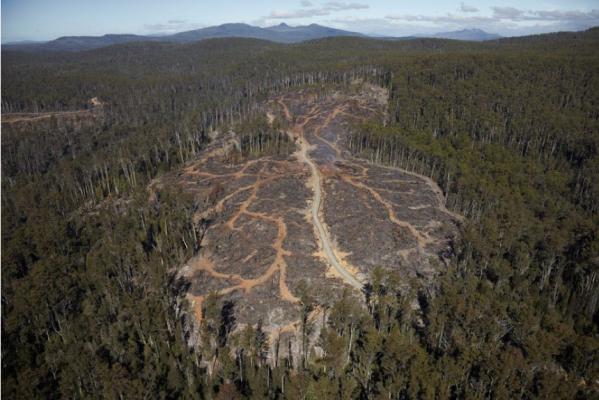 What certificate of sustainability supports this practice and how can destroying ancient woodland be described as using “sustainable re-growth logs”?

All that Ta Ann are relying on when they make such certification claims is that Australia has been generally recognised as a reliable producer of wood products by some accreditation agencies.  However, we suggest that the specific activities being allowed by Ta Ann in Tasmania is throwing that reputation into question!

Meanwhile, back in Sarawak ordinary folk are also been forced into taking direct action with a wave of blockades against greedy and corrupted logging and land grabs promoted by Chief Minister Taib Mahmud, who is the man behind Ta Ann.

Before Ta Ann’s Australian spokespeople complain about “illegal actions” by protestors concerned about the environment and the rights of indigenous peoples (instead of their own profits) they should consider the appalling record of corruption and illegality that is well documented against Taib Mahmud and his cousin Hamed Sepawi, who is the Executive Chairman and Chief Shareholder of Ta Ann Tasmania.

Right of protest – another blockade hits the headlines in Sarawak.