Stop Lying - We Are Still Here! 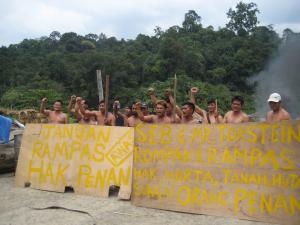 We are still here – the Penan are demanding a proper settlement with signatures.

Penan blockaders, who have brought construction on the Murum Dam to a standstill over the past ten days, have reacted with outrage at the news that their assemblyman, BN’s Liwan Lagang, has been telling the media that a settlement has been reached.

In response they have instead tightened and extended the blockade to another approach road to the dam.

Our reporter in the area has informed us that the blockade is now manned by all the Penan Chiefs from the nine villages due to be affected by the flooding from the dam and they have refuted Lagang’s report of a settlement as a total falsehood:

“They clarified that their protest is growing from strength to strength with the full involvement and support of all their Village Headmen and Leaders of their respective Village Development and Security Committees (JKKK). The only Penans who have left the site have been forced to do so in order to search for food to sustain their protest or to return their wives and children to their villages. They will return in greater numbers.”[ground report for Sarawak Report]

While their protest is in every way peaceful the Penan, who face eviction from their homelands in just a few months, made plain their determination by lighting tyres in front of lorries who have been waiting to proceed to the dam construction site. 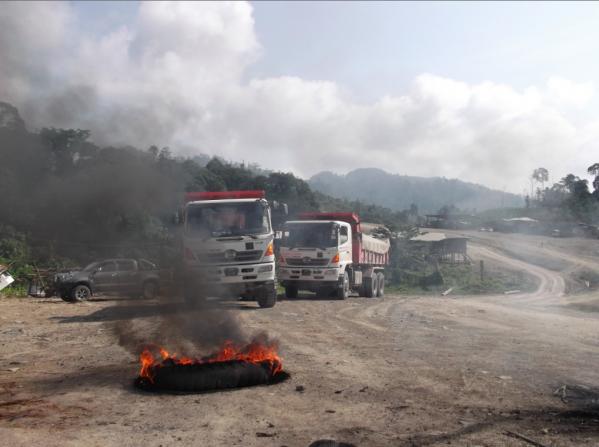 These are our lands and you have yet to pay us compensation for your dam that we don’t need and don’t want.

Their message is clear that they want a proper settlement and agreement on their future, which the State Government and Sarawak Energy have so far woefully failed to provide.

The failure to open transparent negotiations with the Penan over the impact of the dam has been contrary to all international protocols, including the UN Declaration on Indigenous Rights, signed by Malaysia and by Australia and China, whose companies Three Gorges Development and Hydro-Tasmania have been assisting the construction.

According to our reporter, the Penan Headmen stated on Monday that:

“They would not give up their protest against the government negligence in resolving their issues and problems as well as against Sarawak Energy Berhad for being disrespectful to their adat, beliefs and customs. Their way of life is now destroyed with their precious forest. The Penans affirmed that they will not give up their protest and road blockades until the government act on their issues and problems with all demands fulfilled as stated in their Open Memorandum to the Prime Minister and Sarawak Chief Minister.” [Sarawak Report reporter in Murum]

 Among their demands are 25 hectares of land for each of the 300 families affected by the dam; RM500,000 cash compensation for each family; 30,000 hectares of land to each of the nine villages; education fund for their children; community development fund for their community; and rights to land which are not flooded (islands created) by the dam.[SAVE RIVERS PRESS RELEASE] 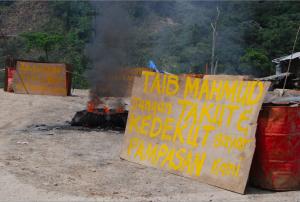 The Penan know who they blame for their problems

It was when well-wishers and NGOs went up to the site , which is cut off from mobile phone and other communications, that they discovered on Monday that the reports of an end to the blockade were misleading, even though a decision had been made to send women and children home after a week suffering in the open weather.

The visitors were able to bring food and provisions to help sustain the protestors, funded by donations to the appeal on this site.

The visitors reported that the Penan at the blockade remain resolute, even though food is scarce and there is little shelter from the burning sun and driving rain. The makeshift huts that they constructed have had the roofs blown off in high winds, forcing them at times to take shelter in the timber camp itself. 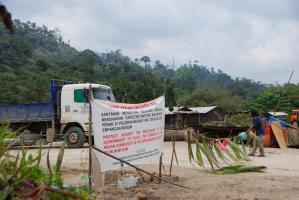 The only food available to them has been brought in by representatives from our Murum appeal and from the anti-dam campaign SCANE who rushed to the area on a humanitarian mission.

To make matters worse, an unreported malaria outbreak has spread through the community.

One Penan at the camp has been positively diagnosed with the disease while, according to the local medical officer from Jabatan Kesihatan who visited the blockade site, a further 38 from Long Malim are struck down with the disease.

But, there was great anger amongst the beleaguered protestors when the visitors also brought the news of Liwan Lagang’s statements to the press.  There was disgust that Lagang had not even bothered to visit the blockade, instead he had sent for 8 young representatives of the villages to travel to Bintulu to discuss matters on Friday.

These young men were not in a position to negotiate say the headmen and neither was Lagang, who is beholden to his boss Taib Mahmud.

“The Penan said the report by YB Liwan was unfounded as the Penans have never given him any consent to him to speak on behalf of the community with regard to their protest on Murum dam. The Penans are saddened by such remarks, describing them as disgraceful to the dignity of the Penan communities in Murum area.

The Village Headman of Long Luar, Madai Salo was further disappointed with the way the government have handled the Penans’ complaints. By asking their Belaga State Assemblyman and low-ranking officers from Sarawak Planning Unit to meet with the Penans, people who could not even make any decisions to act on their issues and demands, the government have shown how little respect they have for Penan opinions and problems” [Sarawak Report reporter]

Liwan Lagang’s attempt to bribe each village with a promise of RM6,000 if they dismantled the blockade had brought further annoyance and disgust, as it is such a far cry from the compensation they are due and of course nothing has been produced in writing to this day.

There is a further source of bitterness against the Belaga Assemblyman.  Not only is he powerless to negotiate, but he also fails to have any right to claim he represents these Penan in his constituency because scarcely any of them have been allowed the basic dignity of their Identity Cards or the right to vote. 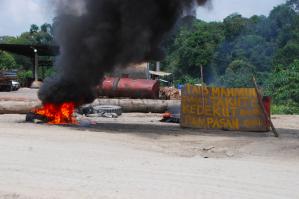 What choice do they have – starve in silence?

A recent report prepared on behalf of the government as part of an obligatory social and environmental impact assessment on the dam has admitted that despite constant attempts at recognition at least 80% of the Penan in these communities are without IC cards and therefore have been kept off the electoral register.

This report was illegally kept secret by the State Government until it was leaked to Sarawak Report last week.

Likewise, we have also exposed a related report detailing the miserable and illegally based resettlement and compensation plans for the Penan, which the state government had also attempted to keep secret.

The miserable compensation arrangements laid out in the report were what sparked this blockade by the desperate communities who discovered that it is planned to pay a below poverty index compensation allowance for just 4 years and to offer alternative areas to ‘farm’ in a region already set aside for oil palm plantations.

Our reporter told us:

One Penan chief from Long Luang shared his despair “upriver, the streams are polluted by logging and plantations; down river is the dam; from the sky comes poison rain. “They are killing us. Why should we move there where there is no life?” It is no wonder that the Penan will remain strong on the blockade. Their very existence depends on it. 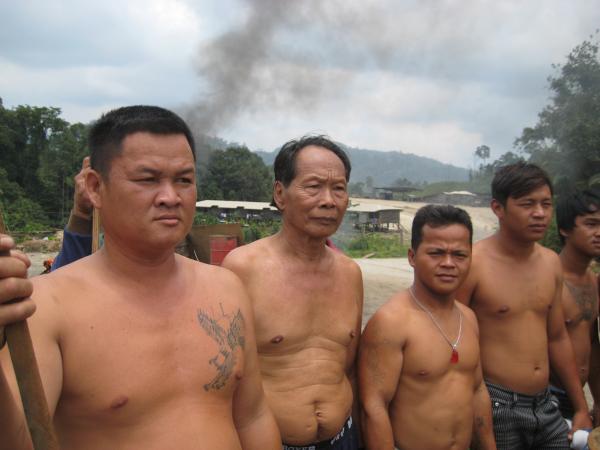 We are here. Don’t speak on our behalf.