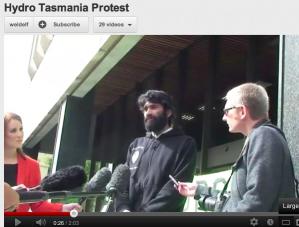 No engagement, just one demand that Hydro-Tasmania pull out of Sarawak!

As the Penan people of Murum enter the fourth week of their blockade against the Murum Dam, local and international NGOs have rallied to their support.

On Friday protestors, surrounded by news reporters, gathered outside Hydro-Tasmania’s impressive tower block headquarters in Hobart to demand that the company cease its lucrative partnership programme with Sarawak Energy.[click for video]

Hydro-Tasmania has been exposed for providing expert assistance and managerial staff for Sarawak Energy, a role it had earlier attempted to dismiss as a minor involvement.

However, as we have now revealed, Sarawak Energy has claimed in its own reports that the involvement of Hydro-Tasmania and the secondment of critical management staff are “essential” to its programme of fulfilling Taib Mahmud’s selfish and destructive ambitions to construct 12 more dams in the Borneo Rainforest, which will displace tens of thousands of indigenous people.

Letters to the Australian Foreign Minister and to Tasmanian Premier

The protest in Hobart marked action by a group of NGOs, who have sent formal letters to the Australian Foreign Minister, Robert Carr and to the Tasmanian Premier, Lara Giddings demanding that Hydro-Tasmania cease its assistance for Taib Mahmud’s dam building activities.

These NGOs include the highly respected International Rivers, Bruno Manser Fund, Rainforest Action Network, JATAN and many others 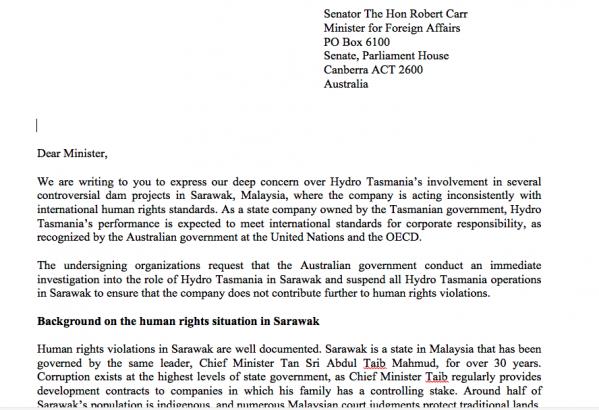 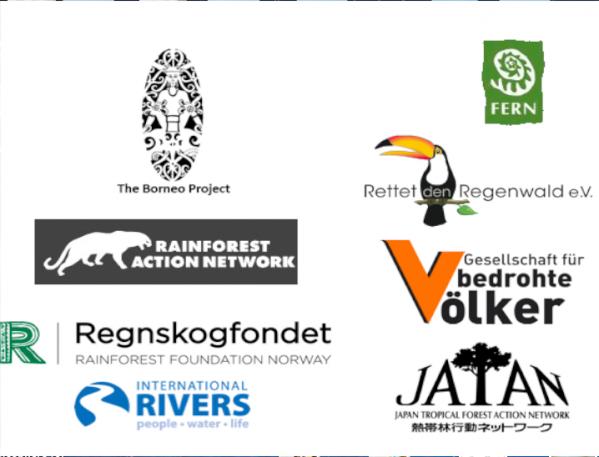 In their letters the NGOs say they are extremely concerned that Hydro-Tasmania has seen fit to become involved in a dam building exercise that has so clearly violated Australia’s commitments on human and indigenous rights as signatories to the UN Declaration on the Rights of Indigenous Peoples (UNDRIP). 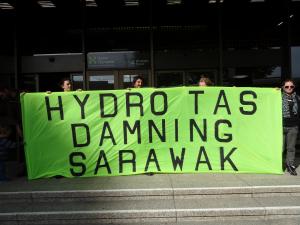 Tasmanian environment groups, who have been questioning the logging activities of Taib’s cousin, Hamed Sepawi, in their native jungle, are now expressing their solidarity with the Murum Penan about to be flooded by Sarawak Energy, of which Hamed Sepawi is also Chairman.

In particular they point out that Sarawak state government officials have taken until now to announce their resettlement plans for the Penan in the Murum area.

This is 5 years after construction was begun and only a few weeks before the completion is due.

Under UNDRIP these resettlement plans should have been fully publicised and properly negotiated with the affected peoples BEFORE any construction took place.

The belated fait accompli has clearly been in response to the fact that we have already released a leaked version on our site.

It was the extreme meanness and insufficiency of these leaked resettlement and compensation plans, which have forced the Penan to take up the blockade.  Until now they had been in the dark, they have told reporters, with various promises being made, but nothing signed. The secret plans amount to nothing less than ethnic genocide for these communities and they realise they have no option but to protest.

“For several years, Hydro Tasmania has closely worked with Sarawak Energy Berhad. Sarawak Energy hired Hydro Tasmania’s subsidiary Entura to do an overall assessment of expanding the capacity of the Batang Ai dam (built in the 1980s) in 2009 and a review of the Bakun dam in 2010. Furthermore, Entura conducted the feasibility studies on proposed dams such as Belaga, Pelagus and Metjawah between 2008 and 2009 and even discovered another potential dam site. Entura also advised repeatedly on matters concerning the Murum Dam”.[Letter to Bob Carr from NGOs]

The US based Borneo Project has also taken up our petition against the Murum Dam. To join the petition Click Here

Thankful for support. The Murum Penan were filmed this week by a number of reporters who went to visit the site. This was what they said to Taib Mahmud.

Meanwhile Tasmania’s Huon Valley Environment Centre, which has protested against logging of their wild forests for Ta Ann (owned by Taib’s cousin Hamed Sepawi), made a media announcement expressing their solidarity with the people of Murum.

The story has been carried by news agencies across Australia: Channel 9; Daily Telegraph; the Australian; New.com.

While this support and attention will give great heart to the native Penan in Murum, for the first time it seems to be creating anxiety inside Hydro-Tasmania’s HQ.  Company executives, after first dismissing the protests this Friday, then came out and said they wished to “engage”.  The protestors refused unless Hydro-Tasmania ends its involvement in Sarawak! 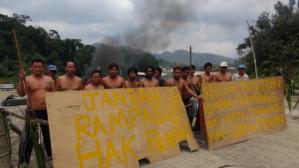 Hydro-Tasmania has claimed that it only acts to the highest benchmarks of corporate responsibility and sustainability – so why are the Penan of Murum so upset about not being consulted or satisfied with their settlement?

Up till now, the state owned company has met concerns about its involvement with the corrupt government of Taib Mahmud and his outrageous and illegal assault on the Borneo environment and its indigenous people with aggressive swagger.

The company erupted in fury when the Australian current affairs programme Dateline raised the issue in a ground-breaking report that was later carried by Al Jazeera.

Chief Executive, Roy Adair, stormed into a radio station and announced that Sarawak Energy was a body of the “highest integrity” for Hydro-Tasmania to do business with. However, when pressed he could provide no evidence that his company had properly investigated this issue, except to “pre-check” that it had joined the International Hydo-Power Association (which it had not at the time).

Meanwhile, Chairman David Crean telephoned the Chairman of the SBS TV company and demanded an immediate retraction of the programme on the basis that Hydro-Tasmania’s involvement in Sarawak was ‘minimal’.

This does not excuse Hydro-Tasmania under international obligations of due diligence when doing business with regimes that are violating human rights, however the programme capitulated and issued an apology, saying the report was ‘unbalanced’. 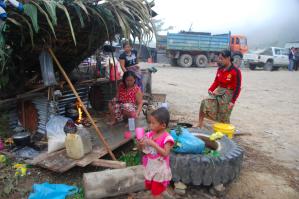 Children with no school to go to. Tasmania has seconded Nick Wright to act as the Corporate and Social Responsibility boss at Sarawak Energy, so why have not basic compensation arrangements including proper schools, clinics and compensation already been put in place before the building of this dam?

This week, Hydro-Tasmania’s pet Senator, Eric Abetz, also took advantage of a sitting of the Environment and Communications Legislation Committee to give a prolonged lashing to an SBS company representative, demanding that staff should take the ‘blame’ at SBS and that the veteran and award-winning reporter on the show should be “re-trained”!  [Click here for transcript of Abetz attack, page 65 onwards].

Not once, up till yesterday, had Hydro-Tasmania allowed to the slightest degree that there might be possible concerns about its involvement in assisting Taib Mahmud push through his controversial and destructive dam campaign in a country mired by corruption and human rights abuses.

However, as the brave Murum Penan have stepped up their blockades and international NGOs have come to their support, the pressure against Hydro-Tasmania’s protestations of innocence has started to build.

In fact yesterday Hydro-Tasmania was even forced to announce that its partner Sarawak Energy was “wrong” to describe its role as an essential partnership.

The company’s communications representative informed the protestors and reporters outside its building that numerous claims in Sarawak Energy’s Annual Report that Hydro-Tasmania has played an “essential” role by filling “critical management positions” and bringing key skills and expertise were incorrect!

Take, for example, this statement in SEB’s 2010 Annual Report that Hydro-Tasmania presumably does not like: 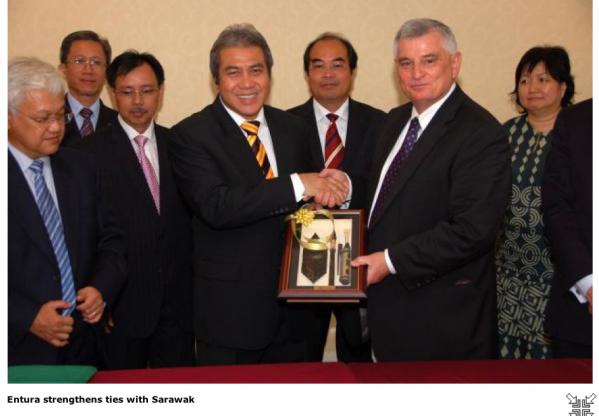 Time for the politicians and people of Australia to decide

Hydro-Tasmania is a publicly owned company that is looking to be privatised.  Currently, it is therefore the Australian public and politicians who will have to judge whether they wish to be held responsible for violations of human rights in Sarawak or whether they are satisfied that Hydro-Tasmania’s is entitled to take part in Taib’s assault on his people.

The fact that under international laws any involvement in the violation of Human Rights is judged unacceptable, whether minimal or not, may help form that decision.

Meanwhile, Hydro-Tasmania is also answerable to its fellow Board Members on the International Hydro-power Association, which it has often cited to justify its actions.  The IHA is an attempt by the dam building industry to improve its corporate and social responsibility record and to work within the UN’s regulations.

CEO, Roy Adair claims Sarawak Energy was a member of the IHA and this encouraged the partnership with Hydro-Tasmania.  In fact, we have researched the situation and it is plain that to the contrary Hydro-Tasmania encouraged and assisted Sarawak Energy to become part of the Association AFTER they had set up their business links.

Chairman David Crean has even recently visited Sarawak to advise SEB on its hosting of the next IHA conference in 2013.

So, could it be that it was in fact Hydro-Tasmaniawho recommended that SEB be asked to join the Board of the IHA just a few months after joining the Association, despite their low grade £3,000 a year membership level?

Could it be that as existing Board Members, Hydro-Tasmania then backed Sarawak’s bit to then host the Association’s Annual Conference just a few months after joining?

Rather than being impressed by an existing membership, as they inaccurately claim, were Hydro-Tasmania in fact the driving force behind the development of Sarawak Energy’s image-enhancing role at the IHA, acting once again to give Taib vital help in his plans to fulfill his self-enriching ambitions over SCORE? 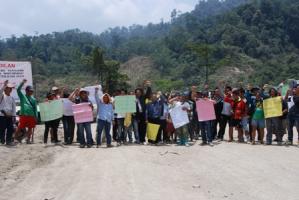 Stop ignoring our rights! The Penan of Murum say they want justice and fair compensation. But they would prefer if their jungle could be saved

Hydro Tasmania in its statements this week justified its involvement in Sarawak by saying that they were only doing it out of the kindness of their hearts to ‘improve the plight of the people':

“Hydro says Entura [their subsidiary] is playing a small part in a Sarawak government project aimed at improving the economic plight of the province’s people”.[Press]

They should be brought to a public forum alongside the Penan of Murum and the tens of thousand of other native people threatened by dams in Sarawak to explain exactly what these benefits have been.