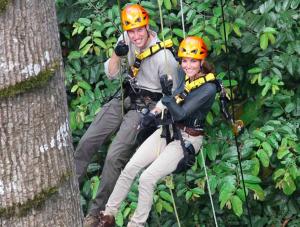 Jungle Ride – nice photos, but where was the story?

A story about topless sunbathing has dominated international coverage of the William and Kate Sabah trip.

It means the destruction of the jungle of Borneo, caused by corruption in Malaysia’s highest political circles, has been ignored in favour of a lot of fuss about a ‘Peeping Tom’ photographer.

One person who will be relieved is Chief Minister Musa Aman.  Sabah may not have got the international attention it might have, but then nor did his corrupt practices.

William and Kate were whisked to a canopy walk in Danum Valley, where they also photographed captive orang utans, and then whisked away again.

Thanks to the destruction of most of Sabah’s natural heritage that is all most tourists get to do in Sabah anyway. 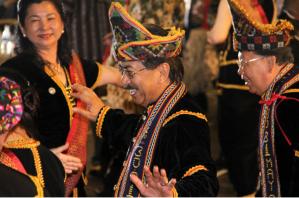 The UK’s Guardian newspaper had reflected on the situation in Sabah earlier in the week, drawing attention to the concerns that the Royal visit would do less to help save what is left of Borneo than bolster the corrupt regime of the greedy man who has been driving the deforestation.

The top international NGO Global Witness likewise has condemned the visit and asked Prince William to consider the real causes of deforestation, which is the corruption of ministers.

Musa Aman has been in charge of Sabah’s forests since 1993 when BN’s UMNO party grabbed power from local parties after losing a fair election, by bribing MPs to switch sides.  Once in power they placed their reliable party Treasurer, Musa Aman, in the crucial position of Chief Executive of Yayasan Sabah, where he was in charge of all decisions about handing licences for logging the State’s remaining forests.

He issued a swathe of such licences and turned a blind eye to illegal practices and this has provided the huge stream of money that has enabled UMNO to go from controlling just a slender majority to commanding a huge majority in the state. Much of the money has gone into massive bribery exercises, including vote buying during elections. 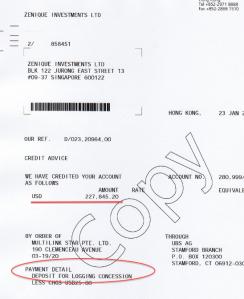 “Deposit for logging concession” – just one of the fat payments made by numerous logging companies into this British Virgin Islands bank account run by Michael Chia, Musa Aman’s nominee

During this period Musa Aman has also managed to become very rich, as has his brother Anifah Aman, the Malaysian Foreign Minister.

The $100 million dollars discovered in Musa’s UBS bank accounts, managed by nominees and derived from timber kickbacks, explains the simple route to all that wealth.

It also explains why, despite the fact that Sabah is now robbed of most of its unique and wonderful jungle and covered with oil palm, most of the people in the state are now far poorer than they ever were before Musa came to power.

The Sabah Chief Minister likes to drone on about his brilliant ‘development’ of the state and rising production figures, but the fact he can’t avoid is that Sabah, like Sarawak, is home to Malaysia’s poorest people, despite being so rich in resources.

If William gave a speech about these matters it was not reported internationally.

The UK is more concerned it seems with promoting companies like BAE who have been adopting a high profile trying to sell arms and other expensive technology to Sabah.

The impoverished people have no use for these purchases and it means more money from Sabah will be leaving the state to enrich the wealthy elsewhere. 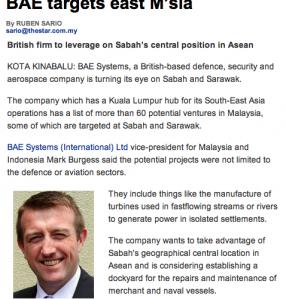 The real UK interest in visiting Sabah? Wide coverage has been given to top arms company BAE’s recent interest in selling ‘a range of technologies’ to the state

Observers of the on-going Scorpene scandal can also wonder at who else will be making vast and illegal profits out of these expensive sales of more unnecessary and over-priced arms from Europe to Malaysia?!

Will it be Najib’s assistant this time, as in the case of one Mr Razak Baginda (whose company Perimeker made over 100 million euros for doing not very much as part of the Scorpene deal) or an assistant of Musa Aman?

Meanwhile, Musa Aman’s active PR machine (very prolific on this site, with lots of comments written by the same person under different names) has already been predictably taking advantage of the royal visit to promote the impression that it clears his name.

As one pro-Musa blog has predictably put it:

“We should perhaps see this [the visit] as an indication that the rumours about deforestation and illegal logging are not true. Why would Musa allow the Royal Couple into Sabah if the home to some of the last remaining tropical jungle in South East Asia were indeed in dire straits”?

Is it a case of you wipe my image and I will buy your armoured launch? 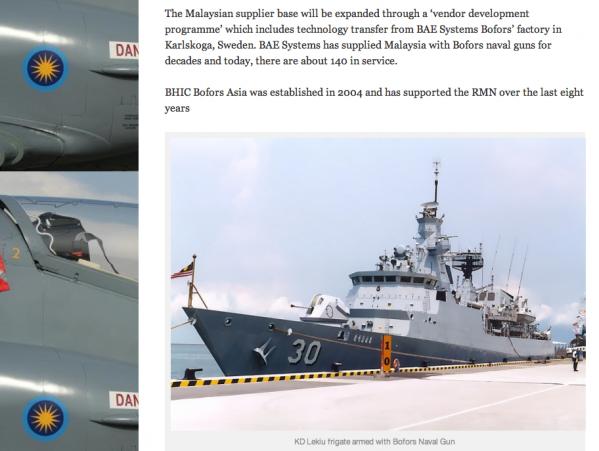 Gun boats! – made by UK’s BAE Systems for Malaysia. The company announced its delight at the royal visit and said publicly it would be following in the wake of William and Kate to Sabah to sell its ‘green and bio’ technology along with a range of other products