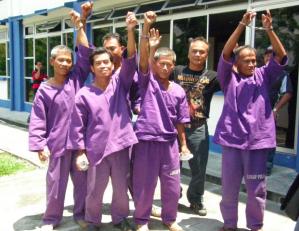 The people who have been taking action against injustice are changing the mood in Sarawak at a faster and faster pace.

Their courage and determination are sweeping away the history of the last decades of destruction.

In the past Taib and BN used false hopes and promises to lure people into deals that lost them their lands and livelihoods and they harshly treated anyone who stood in their way.

If you mounted a blockade you would be thrown in jail and accused of ‘sedition’ under the ISA and other such ’emergency’ laws.

However, now the pressure is growing as the land for timber and plantations is starting to become more scarce and Taib’s relatives and cronies have begun to grab at native  areas where many more people live.

Also, BN’s lies are coming home to roost.  Who anymore believes these companies and politicians (who secretly own huge shares) when they promise that if they give up their land ‘development’ will bring them wealth?

Taib also claimed he would bring ‘progress’ to Sarawak, but it is progress that this greedy ruler has always feared most.  It is now progress that has finally arrived to show him up and expose his wrong-doings, as the eyes of the state are now being opened by radios and phones and cameras and computers and the internet! 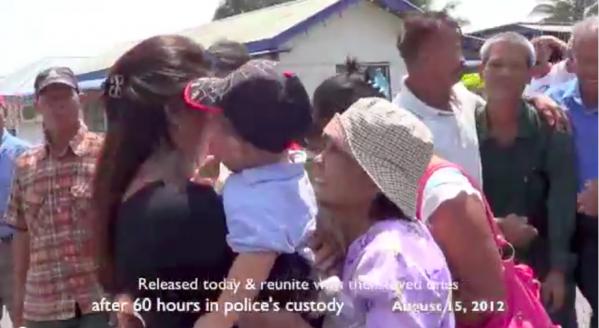 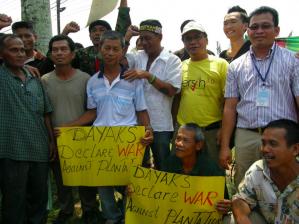 Dayaks against land grabs? You bet!

All the signs are that Taib’s period of anti-progress is coming to a close. This is why a surge of support across the country came up behind the heroes of Kampung Danao in Melikin.

Five of them, two senior and respected Tuai Rumah of their communities were arrested and thrown in jail on trumped up accusations by the logging companies of fire and assault.  What was really behind the arrest was these men’s resistance to the BN-backed companies who have been trying to take their lands.

However, now the people are taking courage and resisting. 500 came to protest at the police lock up after the arrests and after the native rights lawyer and PKR opposition Assemblyman See Chee How came from Kuching to represent the men they were at last released without charges.

People are getting used to standing up for their rights and the police need to catch up with progress, which means not just doing whatever the logging companies instruct them to do, but acting to protect the people under the law. 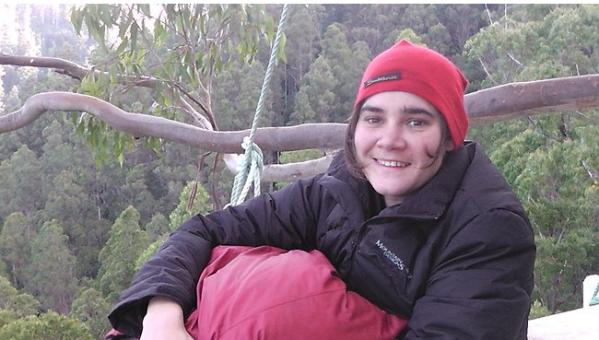 Supporting heroine - Miranda Gibson is in solidarity from Tasmania against the Taib family logging concerns. She is heading for the record books as she enters her eighth month up on her Observer Tree to try and protect the last great Australian forests from destruction by Ta Ann

And the people of Sarawak should remember they are not alone in their struggle against the destructive greed of Taib Mahmud and his family logging concerns.  Miranda Gibson has endured months at the top of this tree in Tasmania in protest against Ta Ann (owned by Taibs’ cousin and business proxy Hamed Sepawi) the company which has been cutting down areas that had been set aside for protected forests. 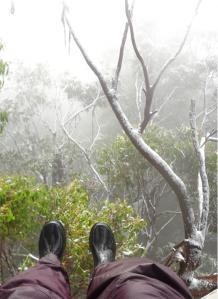 The corruption that has so long plagued Sarawak has also followed Taib’s business over to Tasmania, with certain politicians lining up to support Ta Ann’s outrageous lies about its so-called ‘eco-products’ made from the destruction of ancient native forests.

These trees are just ‘young trees’, these deluded politicians are being told to say.   But they ignore the fact that in order to get the ‘young trees’ huge areas of ancient forest are being cut down.

A few ‘young’ logs are selected for Ta Ann and then the rest of the area is burnt and the wood from ancient trees is wasted, destroying the habitat for millions of threatened plants and animals.

So, Tasmania too is coming to learn all about logging company lies and politicians who you can’t believe, thanks to Taib.

Read Miranda’s daily blog from Tasmania’s Observer Tree and remember the people of Sarawak are not alone.  They have a growing number of supporters from across the world, who have come to understand what Taib has done to the people of Borneo and their forests.