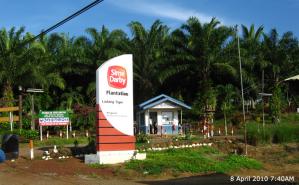 Sime Darby - millions spent on pushing its 'eco-credentials' and 'corporate-social responsibility agenda', but now it has been exposed over corruption in the appropriation of Native Customary Lands

Sime Darby is Malaysia’s largest company and the world’s largest palm oil conglomerate. It is predominately owned and controlled by the Malaysian Government.

So, maybe little surprise that it is enmeshed in corruption, as laid bare by the arrest and charges against its former Chief Executive this week over the misappropriation of millions of ringgit.

What has interested the people of Sarawak however, is that these charges relate to criminal dealings over Native Customary Rights (NCR) Lands grabbed by Taib and his side-kick, the ‘Land Development Minster’ James Masing.

Masing’s ‘New Model Joint Development’ of native lands has caused grief and destruction all over Sarawak during the past decade.

As the rash of current court cases against these ventures has shown, many, many native communities were not consulted over the removal of their lands under this scheme.  Nor were they compensated and nor have these “joint ventures” provided them with any noticeable reward or benefit beyond the destruction of their lands, now converted to oil palm by Sime Darby and other such mega-corporations.

As the PKR leader and native rights lawyer, Baru Bian said in a statement following the arrests:

“This latest Sime Darby episode serves as another example of land-grabbing in Sarawak, a phenomenon which is widely practiced by those with powerful connections, but which the CM claims does not exist.”

Masing, nevertheless, still plans to continue ‘alienating’ a million hectares of Native Customary Lands via this illegal method, which is not only proving to be a human tragedy but also an environmental disaster, causing the destruction of some of Sarawak’s last remaining rain forests.

Much of the area that he has selected to be handed over to such “JVs’ is in his own region of Kapit, including lands taken and given to two companies, Nature Ambience Sdn Bhd and Vertical Drive Sdn Bhd, which were sold via the BN crony Chew Chiaw Ann to Sime Darby back in 2008 and 2009. 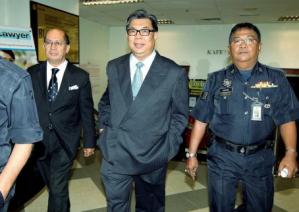 Scapegoat? - Many believe that Ahmad Zubair is being saddled with the blame for the RM2billion shortfall in Sime Darby's profits. After all the company's real controllers are Malaysia's political bosses, including Musa Hitam, former Deputy PM and Sime Darby Chairman.

It is these deals that are now the subject of the corruption investigations against former Sime Darby Chief Executive, Ahmad Zubair.

The move corroborates Sarawak Report’s own research, which has shown that nearly all the NCR lands sold via Taib’s ‘Land Custody and Development Authority’ over recent years have been subject to highly questionable profit-making on the part of politically connected individuals and relatives of the Chief Minister.

Take for example our expose on James Masing himself who, together with his deputy Mong Dagang, had sought to profit to the tune of some RM70million from the sale of native lands belonging to their own constituents!

However, as the legal battles get underway to bring at least some of these misdeeds to account, where does this leave the much trumpeted ‘eco-credentials’ and ‘corporate and social responsibility agenda’ of Malaysia’s largest company?

Not much left to save! - Eco-gestures by one of the main destroyers of Sarawak's rain forests, the Malaysian Government-owned Sime Darby

Last year we pointed out Sime Darby’s corporate failings when we questioned the company’s inclusion in the so-called “Corporate Circle” adopted by the New York economist Jeffrey Sachs, who heads up Columbia University’s Earth Institute as their Professor of Sustainable Development.

Sime Darby, who was paying huge sums to the now discredited PR company FBC Media to boost its eco-image, had just donated half a million dollars to Professor Sach’s institute, whose sponsors are promoted as pioneers of sustainability.

Embarrassingly, in their PR presentations FBC Media simultaneously boasted that it had ‘cultivated’ Jeffrey Sachs to become an ‘ambassador’ for the company. 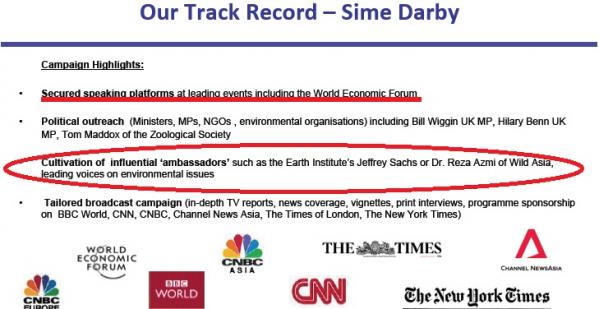 FBC highlighted for example, how Sachs had appeared in an FBC-organised advertisement on behalf of Sime Darby in the Herald Tribune in which he claimed that: 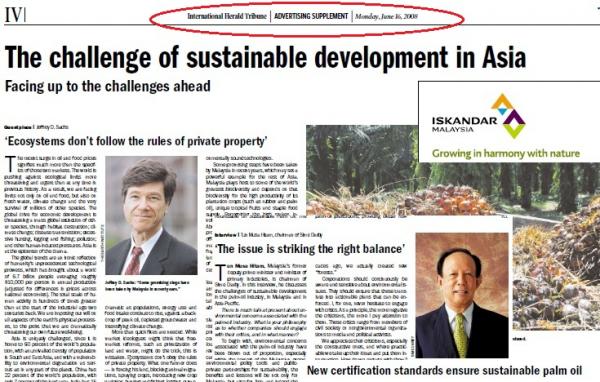 Not so law-abiding after all? - Sachs poses in a Sime Darby 'advertorial' organised by FBC media next to BN top man and company Chairman Musa Hitam

A year later, as the corruption scandal has bubbled on following Zubair’s arrest in 2010, the self-styled world poverty and sustainability guru has moved to distance himself – Sime Darby no longer features in his Corporate Circle. 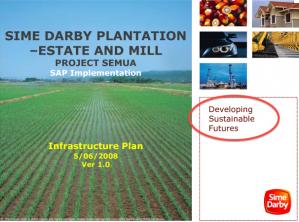 Nevertheless, Professor Sachs made full use of his apparently continuing close relations with Malaysia’s BN regime (main proprietor of Sime Darby) when he launched an extraordinary personal campaign to snatch the top job as President of the World Bank!

Sachs styled his unprecedented personal bid earlier this year on the basis that he represented world poverty and sustainability interests.  Key among a handful of countries supporting him in this guise was Malaysia!

In fact, Malaysian corruption and its unsustainable stewardship of Sarawak and Sabah has been one of the key driving forces behind the destruction of the Borneo Jungle and the appalling human rights abuses against its indigenous peoples.

If Professor Sachs wishes to confront world poverty and end environmental destruction, we suggest he should accept this truth and stop employing Malaysia’s BN regime as one of his main sponsors.  It is high time that more of the world’s more powerful voices and prominent people started to speak up for the native people of Sarawak!