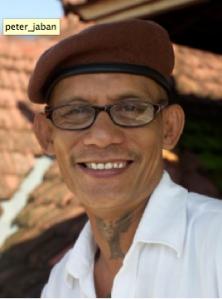 Radio Free Sarawak presenter, Peter John Jaban had caused concern when he disappeared on Thursday. At the time colleagues feared he had been arrested by plain clothes police.

Police now say they are searching for Peter John Jaban, the Radio Free Sarawak presenter, following concerns about his disappearance.

However, colleagues are now coming to the conclusion that Peter John, known as Papa Orang Utan to listeners, has most likely hidden himself voluntarily after becoming scared after being detained at KK airport.  Today the station issued this further press release as an update on the situation:

“Radio Free Sarawak wishes to update listeners that is has yet to receive direct or indirect contact from its presenter Peter John Jaban.

However, there has been some news that he has been present in Miri over the past two days and he appears to be moving freely.

This is encouraging information and we are currently concluding, therefore, that he decided to hide himself voluntarily after being frightened by questioning at KK airport and being led to understand that he would be wanted for further questioning by Special Branch when he got to Sarawak.

The police in Miri have announced that they have received no instructions to detain him.  However, they are now looking for him, because of the concern over his confusing disappearance after he left the car of the friend who picked him up from the airport.

We are concerned for Peter, who has health issues and who is also clearly frightened because of the threats that have been made about his role at the Radio Station.

However, we are no longer concerned about his immediate safety or that he might be under detention.

We will update on further information and thank the very many supporters in Sarawak and beyond for their concern about Peter, who has taken a great deal of strain since taking up the challenge of working on Radio Free Sarawak”

The team at Radio Free Sarawak are hoping that the DJ will make contact shortly and manage to return to join the show.  He has taken periods of extended leave in recent months, as he wished to connect with friends and family back in Sarawak.