Democracy Versus Rigged Elections In Sarawak! 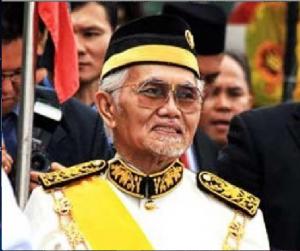 Many of the world’s worst dictators try to claim legitimacy through the ballot box, so that they can proudly claim that they are voted time and again into office by their ‘loving’ people.

In fact, they cheat.

Taib is one of these and probably the only person he is fooling is himself.

The methods Taib uses to cheat in elections have become legendary and would often be entertaining, were the consequences not so pernicious.

Already, in advance of GE13, Radio Free Sarawak has recently unveiled cases where the Election Commission has been slyly changing the locations of Sarawak polling stations from nearby places that kampung folk are familiar with to far away locations they haven’t heard of!

No warning given, of course, except to reliable BN voters. 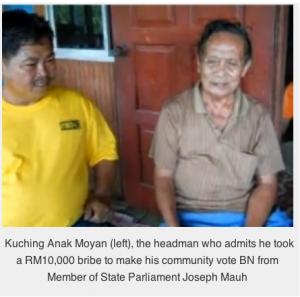 Ultimate insult - this headman was bribed with a cheque that bounced!

And in June, before Najib lost his nerve and delayed the election once more, BN’s business cronies were again seen drawing up at Taib’s home in Demak Jaya carrying suitcases of bribery money for handing out to voters – RM50 for any voter who could demonstrate they had voted BN!

And of course there are the endless cases of ballot box stuffing, false names on the register, threats against teachers and civil servants and people who need state benefits even.

One favourite story from the last election was the trick against one entire longhouse that had threatened to vote for the opposition.

Officials informed them that the polling station would be open only in the afternoon and they were encouraged to drink and celebrate in the morning.

But, when the tipsy folk finally went out to cast their votes it turned out the station was shut – it had only been open in the morning!

However, such bribery and bad practice during the election itself form just part of the anti-democratic system that Taib has built to ensure only a minority of people, whom he can control, get a chance to cast their votes.

The Election Commission itself revealed the shocking truth of the situation in its latest report on voter registration in the State of Sarawak.  These official figures tell us all we need to know about what has been going on.

A full 28% of the adult people in the state are still not registered to vote! 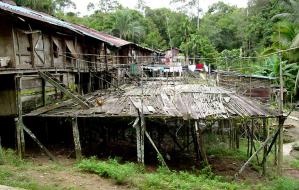 Too hard to find or just too angry with BN? - most of the native people have not been registered

In fact the whole electoral system has been rigged to ensure that the forest people and the Dayaks have just a handful of voters and only a few of those actually get to the ballot boxes.

Areas where native customary lands have been stripped bare by Taib’s loggers and land grabbed by Taib’s planters are notably places where the BN government have made least effort to give people their identity cards, register them to vote and in many cases even to grant them birth certificates.

For example, according to surveys by the NGO Mafrel (which fights for free and fair elections), in Lawas where there are 30,000 potential adult voters only 6,000 are registered to vote.  Nevertheless, in the last state elections those people of Lawas stood up for themselves and booted BN out.

Likewise, in Batang Ai, where lands have been flooded by the dam and huge areas taken by SALCRA’s palm plantations, which have done nothing to help the local people, but much to make Alfred Jabu’s family rich, there are 22,000 people but only 8,000 voters.

These are what are known as rotten constituencies, where Taib has made sure that only a small number of people get a chance to vote – people that BN politicians expect to bribe and influence. 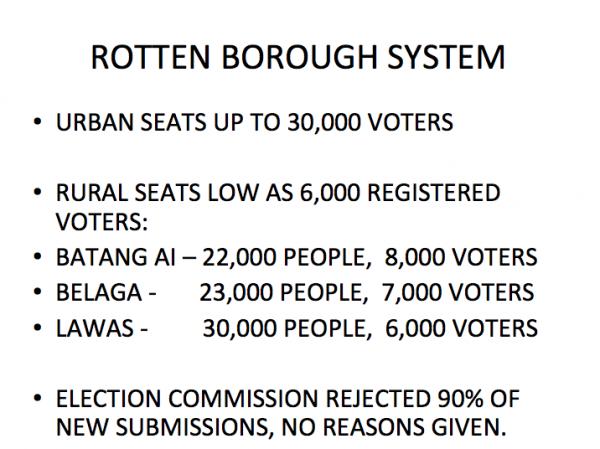 Figures provided by Sarawak Report to UN staff in 2011

The truth is that the last thing Taib wants is to expand the size of Sarawak’s electorate, because he would lose control of the voters.  This is why before the last election the Election Commission, which should be independent, but is notoriously controlled by BN, rejected 90% of the new submissions for voter registrations in Sarawak with no reason given!

These applications had been painstakingly gathered by people who wanted to help the rural folk have their voice in the elections.  However, Taib was determined this should not happen.

The scandal of Taib’s gerrymandering (rigging of the voting system) also applies to hundreds of thousands of urban voters.  BN have long since lost the support of Sarawak’s sophisticated urban electorate and youth vote.  These people have access to information from the internet and learn matters via each other, even though Taib attempts to control the news media.

The populations of Kuching, Miri, Sibu and elsewhere are fed up with corruption, greed, environmental degradation and incompetent government by BN.

So, how does he marginalise them?  He does it by giving all these huge numbers of people just a handful of seats between them.  While an urban seat may contain 30,000 voters a rural seat, where Taib can bribe and threaten a limited number of registered longhouse folk, may only have 5,000 voters.

Just look at how this worked out in the Sarawak State election.  Even after the cheating, bribery and ballot box stuffing by BN the opposition still managed to win 41% of the official vote.  Yet, because so many of their voters were in the urban areas they ended up with only 21% of the seats, leaving Taib to hang on to his power-giving domination of over 2/3 of the seats in the Assembly. 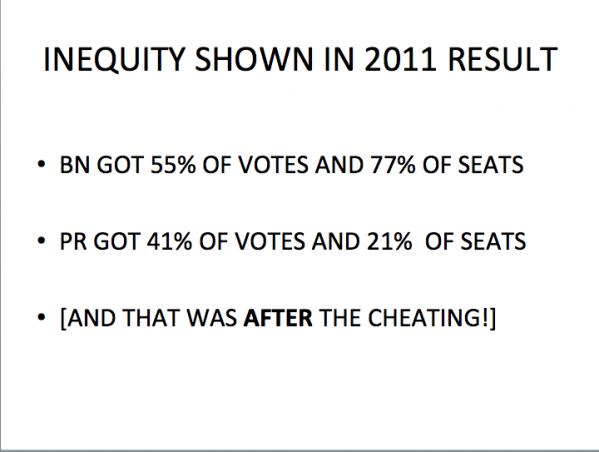 Democracy? Even after monumental cheating Taib could only secure just over half the official (rigged) vote. In his own constituency, where his relatives were handing out bagfuls of money his majority was slashed by 2/3.

Of course the huge swing of voters, especially in the towns, to support the opposition was a terrible fright to Taib. Even though he had managed to mask the disaster by securing so many rotten seats.

This explains why the old dictator went scurrying to the office of the ancient Governor in the middle of the very night of the election to make sure he got sworn in before an angry urban mob decided otherwise!

After all, many times in history when townspeople have had enough of cheats like Taib, they have done just that and prevented imposters from remaining in office! 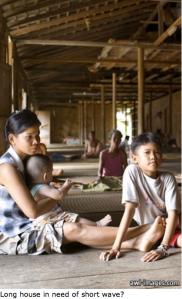 Radio Free Sarawak - highlighted by The Economist as one method for bringing information to the people in the longhouses. But, how many of them have been allowed their right to vote by Taib Mahmud?

It is not just Sarawak Report which is pointing out these matters and bringing them to world attention.  This matter of Taib’s outrageous and blatant gerrymandering has recently been remarked on by the leading international business magazine, The Economist.

The Economist article substantiates and supports all that we have complained about concerning Taib’s cheating and vote rigging to stay in power.

He has shamed his people with his sham democracy in the eyes of the world, so surely it is time this dirty old dictator moved out of office and took the exploitative BN with him?