How Corruption Filters Down - Dirty Deals At Sarawak Energy 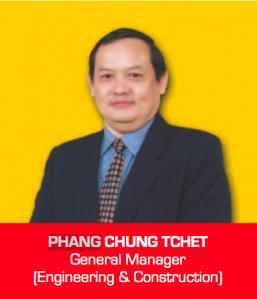 Sarawak Energy's General Manager, Phang Chung Tchet has placed contracts worth hundreds of million into a company in which he is a major shareholder

As all Malaysia now knows, BN/UMNO’s grip on power relies on the continuing support of two corrupted Chief Ministers in East Malaysia.

Both Taib Mahmud and Musa Aman are up to their eyes in money stolen from their people and from the destruction of their home states through unsustainable logging and oil palm plantation.

Many of those stolen billions are used to fund Malaysia’s corrupted ruling party, UMNO, to disrupt the opposition parties and to bribe voters at election time.

So, because these two Chief Ministers are able to deliver so much money and also the key number of votes that keep UMNO in power, Najib cannot move against them to deal with their law-breaking, even if he wanted to.

To the contrary the Prime Minister has brought these corrupted figures right into the heart of his government. Musa Aman’s brother is the Foreign Minister and Taib’s Jacob Sagan is a Trade and Industry Minister – both are tainted with timber corruption. 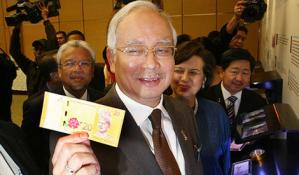 One of the most pernicious effects of the way these greedy Chief Ministers govern’ is that their corruption has spread down unchecked.

The fish rots from the head.

So, it is hardly surprising to find that all Sarawak and Sabah’s senior administrators are now trying to get up to the same dirty tricks as their political bosses.

Najib Razak has to take direct responsibility for allowing this to happen in Sabah and Sarawak and for not allowing the MACC and law enforcers to do their job in bringing these villains to book.

Take for example our new revelation about the corrupt contracts handed out by Sarawak Energy boss Phang Chung Tchet.

Back on 24th August 2001, Mr Phang registered a new company called C.P. Power Sdn Bhd, of which he became Director and 80% shareholder.

Five days later, on 29th August 2001, a new subsidiary of Sarawak Energy Bhd was created, called Sarawak Energy Engineering Sdn Bhd.  This was based at Sarawak Energy’s headquarters and the Manager and a Director of that company from day one was also Mr Phang Chung Tchet.

Interestingly, and perhaps to counter certain rumours that have been circulating about graft, Sarawak Energy Engineering Sdn Bhd changed its name last month and moved to a separate premises.  However, the Manager and Director continues to be Phang Chung Tchet. 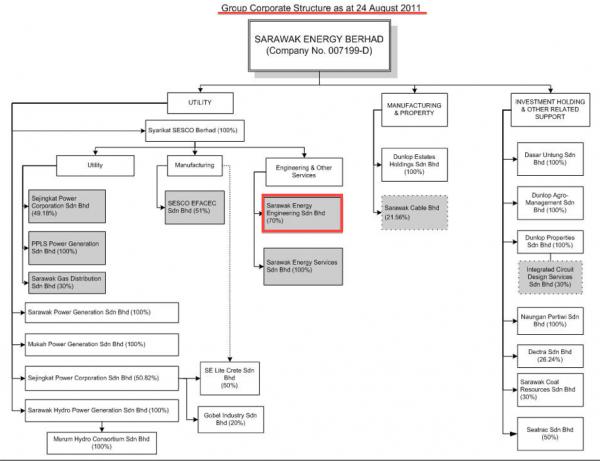 Sarawak Energy Engineering (now See Engineering) was set up as a 70% subsidiary of SEB, based at its Head Quarters and Managed by Phang Chung Tchet. But who owned the remaining 30%

So, the question is whether there is any connection between this 70% subsidiary of SEB, managed and directed by Phang Chung Tchet, and the other company that he had set up privately 5 days earlier, C P Power Sdn Bhd?

The answer, we discover, is yes.  C P Power Sdn Bhd is the owner of the remaining 30% of the shares of Sarawak Energy Engineering Bhd! 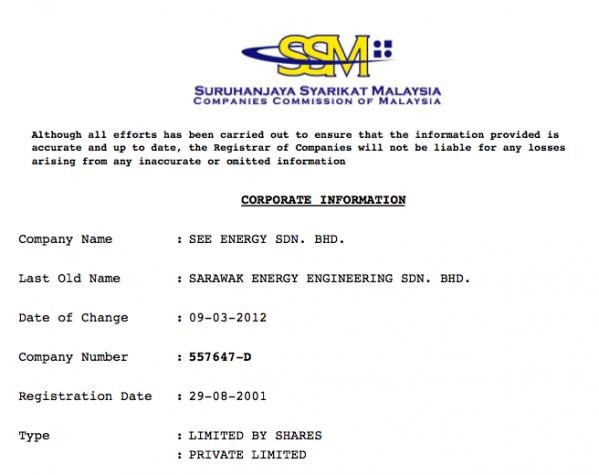 The 30% shareholder is C P Power. Both C P Power and Sarawak Energy (SESCO) are Managed by Phang Chung Tchet

And, as we already know, SEB General Manager Phang Chung Tchet is an 80% shareholder of C P Power. 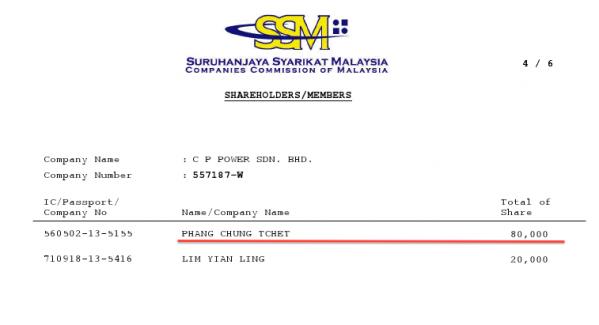 Therefore, 80% of 30% of the profit from all contracts handed by SEB to Sarawak Energy Engineering/See Energy goes right into the General Manager's pocket!

This means that 80% of 30% of any profit from contracts handed by SEB to Sarawak Energy Engineering/See Energy goes right into SEB’s General Manager’s pocket!

So, perhaps it is time to take a look at those contracts, which have been awarded since the setting up of Sarawak Energy Engineering back in 2001?

Over RM900 million in contracts!

Reference to the official Construction Industry Development Board website shows that Sarawak Energy Engineering/See Energy Sdn Bhd has received well in excess of RM900 million worth of state contracts over the past decade.

The vast majority of these contracts have been handed to the company by Sarawak Energy Bhd.

As the General Manager of Sarawak Energy it is to be assumed that Mr Phang has a major and controlling influence over the decisions to place these contracts into the hands of a company of which he is such a huge shareholder!

After all, 80% of 30% of the profits adds up to a lot of money, when you are talking about nearly a BILLION RINGGIT in contracts!

So, Mr Phang Chung Tchet clearly has very serious questions to answer regarding the clear and corrupt conflict of interest involved in his management of these two companies and the hundreds of millions in contracts that have flowed from SEB into a company he owns. 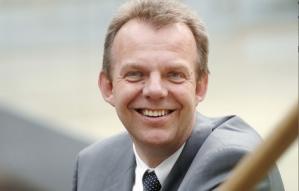 Likewise, there are burning questions for the Norwegian Chief Executive of SEB, Torstein Dale Sjotveit, who has clearly knowingly allowed this corruption to go forward (how could he not have checked the shareholders of this major subsidiary?).

However, Mr Phang will have taken his cue from his own political bosses in Sarawak.

The Chairman of SEB is none other than the Chief Minister’s own cousin Hamed Sepawi, who has received almost limitless state patronage in terms of plantation concessions, construction contracts, timber concessions and licences from a government that Taib completely controls.

When Taib and his cousin and nominees, like Hamed, are themselves so blatantly corrupt and are seen to get away with it, why should the underlings be expected to behave differently?