Zunar Takes His Campaign To The UK! 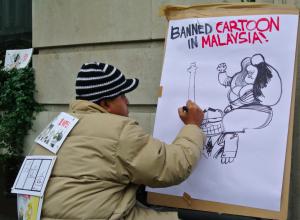 The crowds passing through ‘Malaysia’s Speakers’ Corner’ on Trafalgar Square had the pleasure of watching cartoons being created live this weekend, as the ‘notorious’ Zunar took his campaign to London.

Zunar does in Malaysia what dozens of successful cartoonists do in the UK and in other free countries, which is lampoon the political leadership.  It is generally regarded as a healthy tonic to be able to make fun of your leaders and to point out their weak spots. 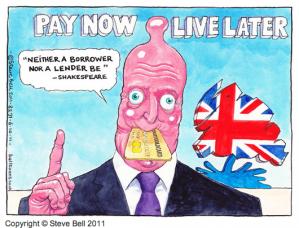 David Cameron probably doesn't really like being shown as a condom. On the other hand he knows better than to arrest and try the cartoonist for sedition!

In the UK, David Cameron has to put up with being portrayed as condom, owning to his rather smooth and ‘baby-bottom’ features!   This is an annoyance that is generally treated as a sign that a politician has arrived and is sensibly laughed off.

However, the BN Malaysia establishment has reacted differently.  They do not like to be portrayed in anything but fawning tones, it turns out, and they have brought out all their anti-terrorist weapons of law and state to suppress Zunar.

It seems has has had far too many people in stitches over his portrayal of a government run by a mild-mannered and hen pecked husband, half the size of his corpulent and domineering wife Rosmah! 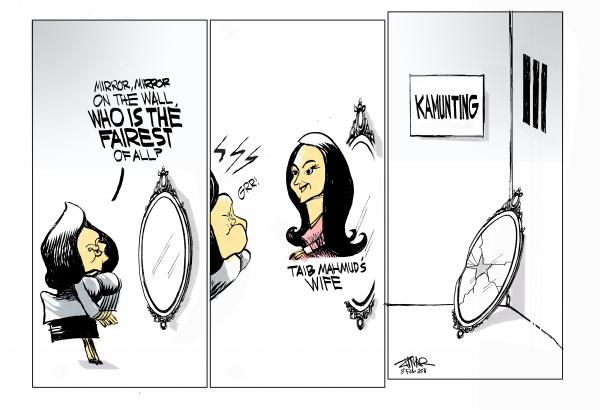 One to please Taib? Zunar has a laugh about how his younger wife at least must annoy Rosmah!

So it was that on the eve of publication of his latest book Zunar was arrested at his home at night by a gang of police, who seized all the copies of the book and of his earlier six books, which had equally poked fun at earlier politicians such as Badawi and Mahatir. 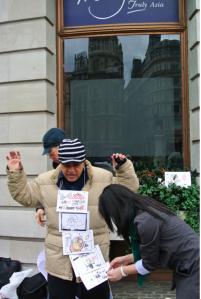 Walking exhibit - Zunar draped himself in his cartoons as he posted himself outside the Malaysian Tourist Office to draw his protest!

Zunar was then transferred through the night to seven different police lock-ups, so that protesters would not know where to find him!  For the entire period he was kept in painful handcuffs.

The police then tried to hold him in remand on the grounds that he was a dangerous seditionist, threatening to overthrow the state.

The Magistrate, however, asked what was dangerous about the cartoons and the police could not answer, because it turned out they had not actually reviewed the drawings and were just acting on instructions!

However, the state (i.e. BN/UMNO) has continued with its determination to intimidate, silence and jail Zunar for mocking politicians who would rather pretend they are special and superior human beings.  He faces trial next month when he returns to Malaysia. 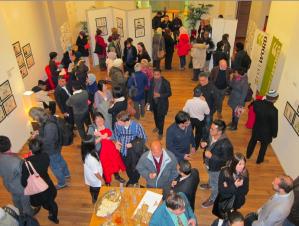 As ever these bully boy, BN tactics have backfired.  They have only boosted Zunar’s fame and influence, turning a cheeky cartoonist into a national figure of protest!  With great courage Zunar has stuck to his guns… or rather his own particular weapon, which is an inky pen.

For the past months he has been exhibiting in Europe and now has come to London with a collection of his latest cartoons on display at an Exhibition supported by the Freedom of Speech NGO, Article 19 at the Free World Centre in Farringdon Road, London.

He launched the exhibition to a packed audience last week and told listeners that when a regime can no longer afford to be laughed at it is a regime that is waiting to fall.  They laughed. 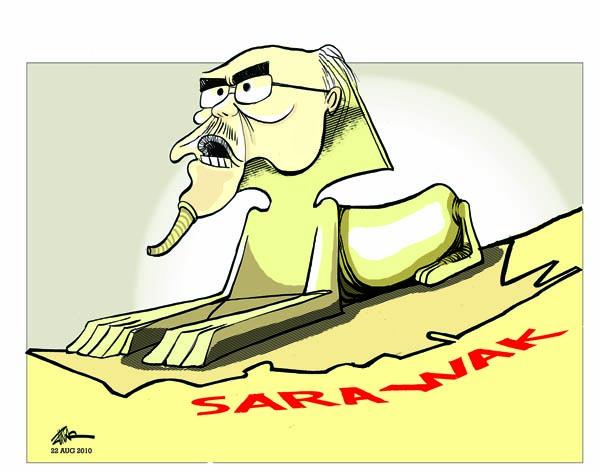 It will come as no surprise that, like the domineering Rosmah, Taib has also been an irresistible staple of Zunar’s humour.  The greedy old dictator has been portrayed as a sphinx and a second Mahatir. 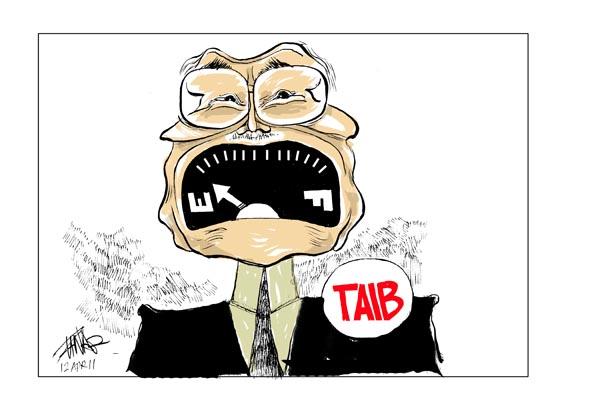 But, this latest cartoon has the old boy running on empty.  Still spouting the same old Sixties rhetoric about progress and development, but now with Sarawak’s resources fast disappearing and without much progress for anyone else but him, he is shown as a spent force! 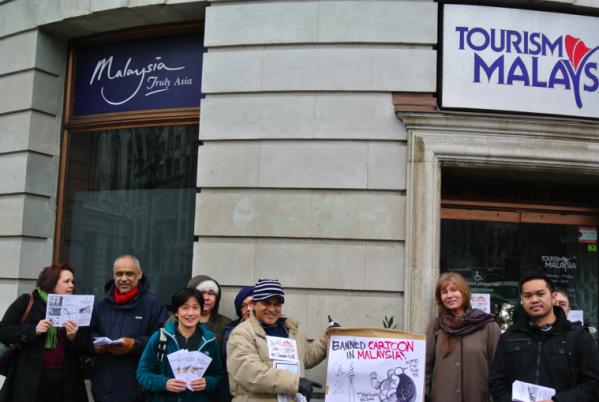 Malaysia's "Speaker's Corner" has temporarily located to the spot outside the Tourism Office in the UK's Trafalgar Square, where one can express one's opinions without being arrested!