Scandal of SALCO - How Taib Plans To Make Billions From Bakun. Exclusive! 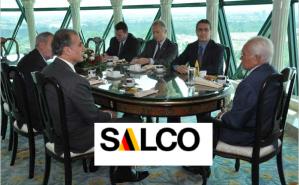 Displaced families, who have received so little compensation from Bakun, may be interested to learn how Taib and his own family are planning to make billions for themselves out of the hydro-electric dam, based on an investment of just RM2.00!

We can reveal that SALCO (Sarawak Aluminium Company Sdn Bhd), the company that has been handed a licence to build a vast smelter in Simalaju, powered by cheap electricity from the dam, is secretively entirely owned by the Taib family company, CMS.

So far, they have only issued two shares for the company, worth a mere one ringgit each! 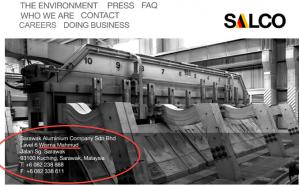 Controlling interest - SALCO is run out of the Taib building, Wisma Mahmud

Our revelation sheds light on a classic money-making scam, that is still in its early stages for the Chief Minister, but where the planned outcome is plain to see.

It depends on a blatant willingness by Taib to abuse his political influence, in order to divert public money into his own pocket and on the apparent willingness of the multi-national company Rio Tinto Alcan to invest in a corrupted project.

At the centre of the ploy, is the company Sarawak Aluminium Company Sdn Bhd, which has always been officially presented as a ‘Joint Venture’  between the giant multinational, Rio Tinto Alcan and CMS, after the two companies signed a so-called Heads of Agreement in 2007 to explore the possibility of investing in the smelter project. 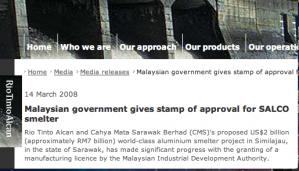 Government support - invaluable for a company with just RM2.00 investment!

In 2008 this supposed joint venture received a manufacturing licence from the Malaysian Federal Government’s Industrial Development Authority and it also established a Memorandum of Understanding to open negotiations with Sarawak’s energy authority, SEB, over access to the electricity.

Ever since, the planned SALCO aluminium smelter has been placed at the top of Taib’s proclaimed SCORE agenda for developing the potential of the Bakun Dam. 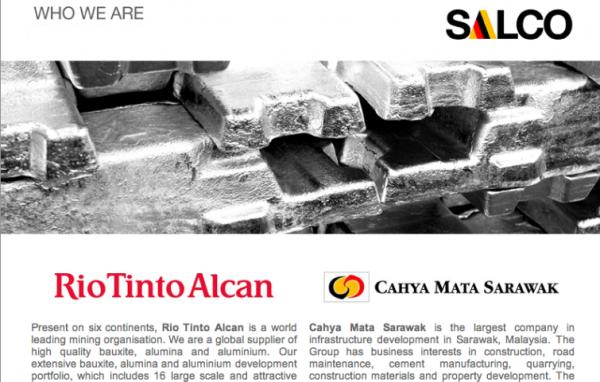 SALCO - is this really who we are?

And, whenever the project is referred to, whether in press releases, statements by ministers, interviews by CMS executives or, indeed, on SALCO’s own website (above) it has always been clearly suggested that the company is 60% owned by Rio Tinto and 40% owned by CMS.

Likewise, the licences and agreements granted by government agencies have further implied that SALCO represents a serious joint financial investment backed by the multi-national. 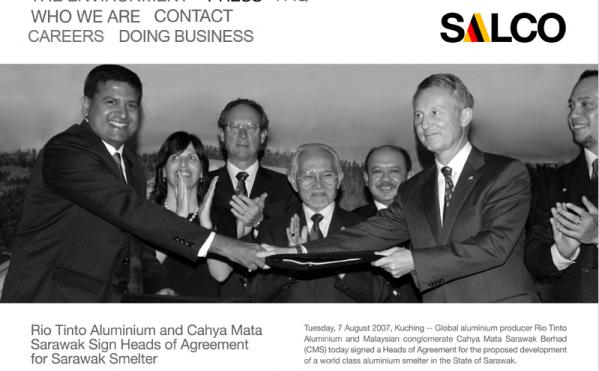 Heads of agreement between Rio Tinto and CMS's Richard Curtis - with Chief Minister (and Chief Shareholder) Taib Mahmud centre stage in a deal designed to net him a fortune!

However, our company research reveals that in fact SALCO consists of just two shares, issued for a mere one ringgit each, both owned  by a company called Samalaju Aluminium Industries Sdn Bhd.

Just two shares at one ringgit each

… and this Samalaju Industries Sdn Bhd is 100% owned by CMS! 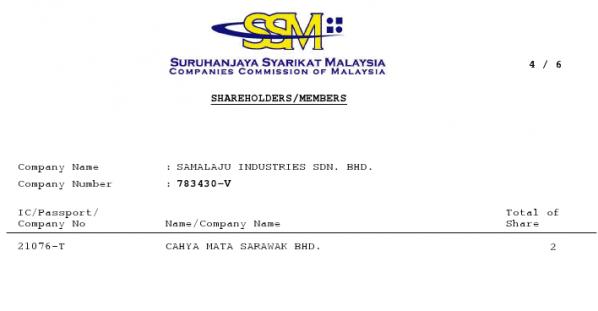 Earlier this week a spokesman for Rio Tinto Alcan in the company’s Montreal headquarters conceded to Sarawak Report that as yet the multi-national has no direct investment in Sarawak:

“There is not much news to report in terms of the Joint Venture”, he said and he stressed that the aluminium manufacturing giant would not buy into the SALCO project “unless the price is right” for the electricity:

Since the Taib family company CMS has itself no credentials as an aluminium manufacturer it seems extraordinary that the State of Sarawak and Federal authorities have nevertheless given its 100% subsidiary SALCO the licence and go ahead to start manufacturing! 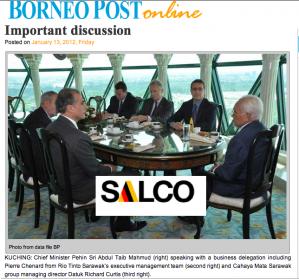 For Taib and his family side-kick Robert Geneid this 'important meeting' had a personal significance. If they can flog 60% of SALCO to RTS they should make billions of ringgit.

However, for CMS there is all to play for. The RTA spokesman confirmed to Sarawak Report that the multi-national is indeed interested in the proposed 60% stake in SALCO, as long as it can negotiate the large amounts of cheap electricity it wants.

Given that, as predicted, the Bakun Dam has created a glut of electricity in the state, even with just two of its eight turbines in action, and given there are few other customers in sight, it is likely to succeed.

This means that the stage is now set for Rio Tinto Alcan to buy over a 60% stake in SALCO!  Its the deal that Taib and his latest top family side-kick Robert Geneid have been frantically trying to pull together, holding ‘important meetings’ (Borneo Post) with Rio Tinto in Kuching just last month. 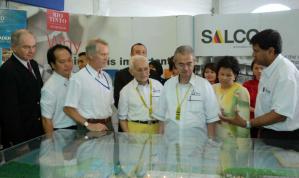 Promoting SALCO - so much political support!

Think of the potential profit for the main shareholders of CMS, if Rio Tinto Alcan moves in to take a 60% stake of this giant aluminium smelter project!

These shareholders, of course, are firstly Taib’s own long dead wife Laila, followed by his four children.

In total, as has been detailed many times on this site, the Taib family own at least half the company and all the top management positions – so plenty of bonus opportunities there as well!

Remember, Taib has so far invested just RM2.00.  Yet this factory is expected to absorb an enormous RM7billion in construction costs and it is then expected to produce at least 550,000 tons of aluminium a year, worth an annual RM2.4billion to Malaysian GDP. This could be extended to a full capacity of 1.5 million tons! [Rio Tinto Alcan press information] 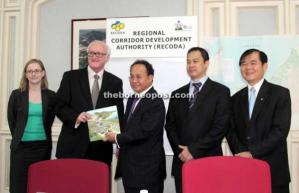 So, why would CMS, with such a project under its control, hand over 60% of it to Rio Tinto Alcan for less than a commensurate price?

In fact, once a nice cheap electricity deal has been cut with SEB (run by Taib’s cousin and proxy Hamed Sepawi), CMS will be in a position to make a fat multi-billion ringgit profit out of their tiny two ringgit investment in SALCO!

And, further down the line, consider what a 40% stake in such a venture would be worth should Taib and his family eventually decide to sell it off!  They could even decide to cash in early and sell off their holding for a few billion up front – after all they only invested RM2.00!

Indeed, such RM2.00 companies have been the method by which corrupt politicians in Malaysia have exploited their positions for years, passing huge contracts and concessions into these empty shells, so that they can then be sold or the work sub-contracted to a real working concern.

But, this project is on a scale of its own!  The question is, why does Rio Tinto Alcan, a supposedly respectable multi-national, think it is appropriate to become involved? 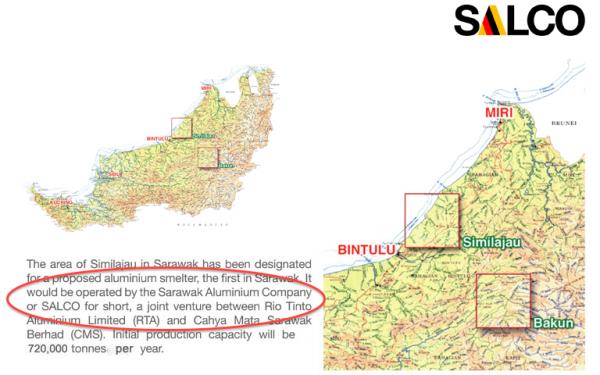 Off repeated lie - "we are a joint venture between RTA and CMS"!

The losers are just as easy to identify.  To start with, Taib failed to tender the project, so the State of Sarawak stands to get no realistic premium from the licence.  Likewise, with the rock bottom price for the hydro electricity, SEB is likely to make very little with which to improve its services and infrastructure.

As usual, other construction companies have found themselves squeezed out of the opportunity, but will probably end up sub-contracting for CMS.

Then consider the Civil Service pension funds, which were forced by ministers to invest billions in the Bakun Dam project to keep it afloat, because private investors were too wary.  The promise of rock bottom prices for the resulting hydro-power does not provide much prospect of any reasonable return on that investment, which means civil service pensioners will lose out! 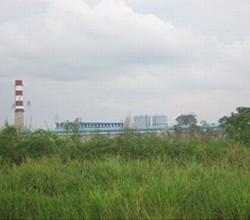 Noxious - the Pressmetal plant in Mukah has provided no jobs for the locals, but it has taken their land and poisoned their fields and their health

And what of the local people in the area?  They are already living in terror of the arrival of the plant, because of the worrying levels of pollution already being experienced by the people of Mukah, who are affected by the existing Pressmetal aluminium plant.

Aluminium manufacturing can be a highly toxic process, unless carefully managed, and the people of Mukah, who have of course lost much of their NCR land to the plant that now looms over them, are suffering health problems and their plants are dying.

And what about the possibility of jobs for such people?  Well, unfortunately, it appears they are not suitable.  Rio Tinto Alcan has announced a projected 4,700 jobs on the plant, however none of the local people have managed to find employment at Pressmetal.

Instead, Taib has already made clear in his announcements that he plans to import tens of thousands of foreigners from places like India to work in his SCORE projects.  Doubtless these immigrants will be given houses, identity cards and voting rights, all of which so many local people find hard to obtain. 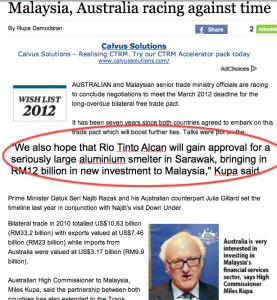 Just days ago the Australian High Commissioner was over in Kuching promoting Rio Tinto Alcan's involvement in SCORE. He is supporting Australian big businesses venture with the Taib family, but what will it mean for jobs back in Tasmania's aluminium plant which Rio Tinto is planning to shut?

Doubtless, they will be expected to vote BN in return!

Finally, what about the workers in existing Rio Tinto Alcan plants in places like Tasmania?

Rio Tinto Alcan have in fact just signalled that they are interested in selling off their Tasmania plant, presumably because they have a cheaper option elsewhere!

RTA spokesmen have made plain that they have yet to move to the stage of feasibility studies and environmental and social impact assessments for this Simalaju smelter project.

However, they can be under no illusion that in conducting prospective business with CMS they are proposing to enter into a joint venture partnership with one of the world’s most notoriously corrupted and politically exposed companies. 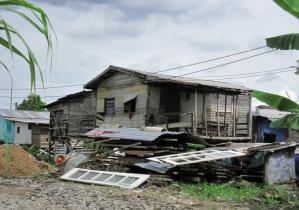 Taib stands to make billions (as usual), but what is in this project for local people?

Taib Mahmud himself is being formally investigated by his own federal government’s anti-corruption commission (MACC).  And countries all over the globe have confirmed that they are looking into the assets of Taib and his family, with respect to money laundering!

So, what on earth do Rio Tinto Alcan think they are doing even considering entering into such a deal with a company that is blatantly owned by Taib?

Of course, they stand to make a fortune for their shareholders if they are able to swing a ludicrously cheap deal for their electricity and to set up in a country like Sarawak, which has no carbon taxes and low standards of supervision on matters like the environment and labour matters.

But these days shareholders also expect certain basic ethical standards.  Do they include doing business with corrupt companies personally owned by Chief Minister of the state in which they are investing?

Is this what Rio Tinto Alcan mean by the statement:

“We respect the laws and customs of our host countries and communities. We work with them to ensure benefits and opportunities are shared”?

To the contrary, the Bakun Dam and the whole planned string of future dams and SCORE related projects that are now being rolled out in Sarawak, represent nothing less than a human and environmental disaster in one of the world’s last remaining great tropical rainforests. 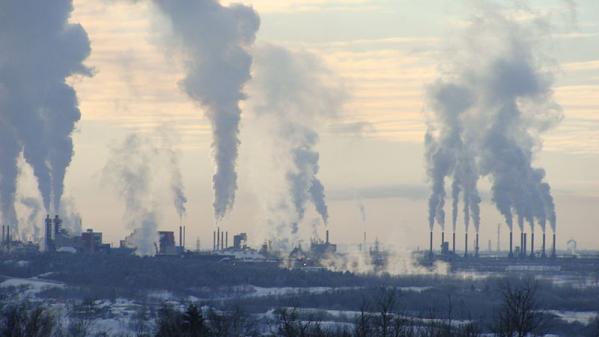 What's in store? A Rio Tinto Alcan factory in Canada

The driving motivation behind this project is the desire by Taib Mahmud and relatives like his brother in law Robert Geneid (who now features as a key negotiator in the SALCO ‘joint venture’ project) to become personally even richer.

So, is it right for companies like Rio Tinto Alcan to threaten to pull out of established locations like Tasmania in order to get involved with a man like Taib in a place like Sarawak?