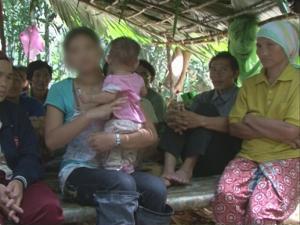 "Petty" issues - this girl was raped by loggers on the way to school and left unconscious and pregnant. Taib refused to allow an investigation into this or any of the other rapes reported by the Penan.

For the first time people in the UK are beginning to wake up to the Malaysian High Commissioner, who turns out to be a fellow called Datuk Seri Zakaria Sulong.

This is because he has just made the most extraordinary series of insensitive and highly undiplomatic remarks, if a report by the Borneo Post is to be believed.

Mr Sulong apparently took the opportunity of a visit by Sarawak journalists (who of course are all forced to work for Taib controlled organisations like the Borneo Post) to cast aspersions against NGOs who are reporting human rights and enviromental problems in the state.

In particular, he complained that many NGOs have been drawing attention to what he called “petty issues, like animals in zoos and the Penan in Sarawak”! [Borneo Post]

Today the Swiss-based Bruno Manser Fund, which was singled out in these complaints, expressed outrage that the problems of the Penan people and other tribes should be dismissed with such obvious racism.

BMF has responded by demanding the High Commissioner should resign:

“How can this man claim to be representing Malaysia in the United Kingdom if he compares his own people to zoo animals?”[Bruno Manser Fund] 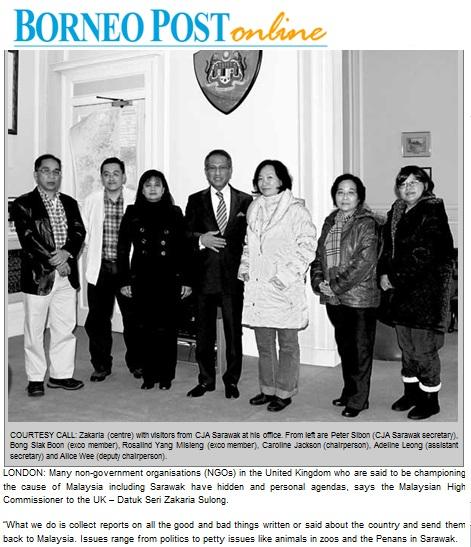 Undiplomatic diplomat - how the High Commissioner blundered in the Borneo Post

Of course, numerous organisations and individuals have drawn attention to the appalling human rights issues, which have resulted in the virtual genocide of the Penan in Sarawak, as loggers have driven them from their jungle territories.

These organisations include BMF, Survival, Greenpeace, The Borneo Project, Friends of the Earth, Fern, Rainforest Alliance and many Malaysian groups such as Brimas, Suakam and indeed the PR opposition parties. 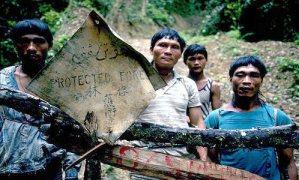 Petty issue? The Penan's brave fight to keep the loggers out of Sarawak's remaining 3% of virgin jungle

The Penan are just one of the many tribes in Sarawak who have found their livelihoods taken by the destruction of the rainforest.  However, because they are hunter nomads they have been one of the communities worst affected by the virtual disappearance of plants and animals.

Like other tribes the Penan have also seen their Native Customary Rights Lands taken by loggers holding permits bought from Taib Mahmud, but received no compensation and none of the promised ‘development’ that they were told timber sales and palm plantations would bring.

Worse, they have been subjected to violence and abuse by the gangsters that the timber gangs have long employed to suppress any native resistance to their clumsy destruction on the jungle.  These gangs do not restrict themselves to violence against the menfolk and people manning blockades.  There have been numerous reports of rape against the girls and women of these communities. 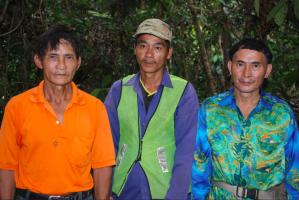 They took our lands, so they think they can take our women too. Penan headmen speak out.

So how has Taib responded to these complaints of rapes against girls as young as ten years old?  Despite the fact that official delegations by Malaysian authorities have verified these allegations, he has refused to allow any investigation.

The reason seems to be that he regards these Christian forest folk as something akin to animals.  After all, his own side kick James Masing when interviewed by the UK’s BBC Television about a young girl who was beaten unconscious and raped by loggers, said the matter was not serious, as these people are “promiscuous from an early age”!

These are the issues that NGOs are drawing attention to and which the Malaysian High Commissioner has chosen to call “petty”!

In his reported words to the Borneo Post Sulong did admit that these issues and stories were causing Malaysia some considerable problems.  Indeed he whined that, as part of his job, he has to monitor the stories that are published in the UK about such matters and he acknowledged that it is hard to get politicians here to speak out against the NGOs, because they are “very powerful”.

The power of truth 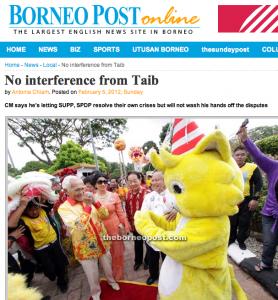 The power of the NGOs comes from telling the truth.  In Malaysia papers like the Borneo Post are prevented from reporting such matters as human rights abuses and environmental destruction.

Instead, the ‘weighty issues’ that papers in Sarawak are forced to report day after day and page after page are the dreary diary events of the geriatric CM and his wild fantasies about ‘Score’ and ‘development’.

They are banned from covering any stories that might embarrass the Chief Minister.

Indeed, some some Malaysians drew a contrast today between the huge coverage by Malaysia’s government controlled newspapers this summer of a Malaysian boy, mugged during a street riot in London and the lack of any similar interest in the welfare of Dayaks.

They queried why the attacks against Dayak people and rapes of Penan women are not worth equal concern? 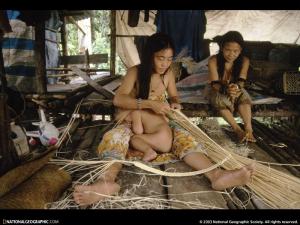 What hidden agenda have the NGOs got in trying to help these defenceless people?

Datuk Sulong reportedly alleged to his Borneo Post guests that NGOs, who have been covering such problems in Sarawak, have “hidden and personal agendas”.  Yet, he failed to make clear what those agendas might be, beyond the obvious concern over the crimes against the Dayak and the destruction of the jungle in Sarawak.

By contrast the agenda of Taib Mahmud and the loggers who are raping the jungles could not be clearer for all to see.  They want to make themselves very rich and they selfishly want to share as little of their profit with anyone else.  Simple! 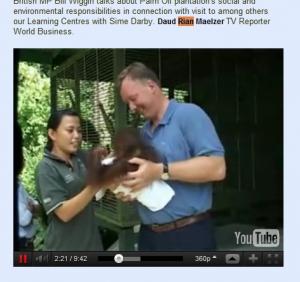 And what of those “zoo animals” who Sulong dismisses along with Penan as a petty issue?  Isn’t another large part of Malaysia’s undiplomatic chief diplomat’s job meant to be about promoting tourism?!

With one dismissive remark the High Commissioner has revealed exactly how Malaysia’s BN government really regards the wonderful forests of Sarawak and the amazing animals with which they have been trying to attract tourists.  He regards them as “petty issues” and “zoo animals”!

The truth is that the top dogs in BN in Malaysia today care about one thing only and that is money.  They have tried to have their cake and eat it by advertising to tourists about Sarawak’s 150 million year old jungle, when in reality they have chopped all but about 3% of it down, killing the animals and driving out the people in the process.

This is what the NGOs have been complaining about. 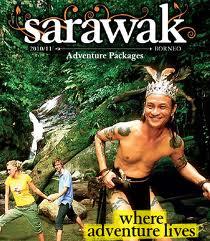 Just for the tourists - "Put them in a Museum", Taib Mahmud. Clearly the High Commissioner agrees!

Hundreds of animal species that just 30 years ago still flourished in Sarawak’s jungles are now threatened with extinction and barely survive in zoos, to which tourists are taken.  These include for example the Bay Cat, of which only about 2,000 now survive, the Clouded Leopard, the Proboscis Monkey and of course the Orang Utan.

Malaysia likes to pretend that it cares so much about the Orang Utan, whose habitat is being eradicated by BN controlled oil palm plantations.  But, High Commissioner Sulong expressed perfectly their real attitude.

To him the Orang Utan, like the starving, abused and dispossessed Penan people, are just a “petty issue” and a “zoo animal”. 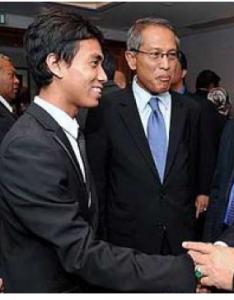 Getting himself in on the story! The High Commissioner placed himself next to celebrity Malaysian mugging victim Mohd Asyraf for the photo-calls. But dismisses raped Penan women as a "petty issue"

So, who needs complaining NGOs, when you have a ‘diplomat’ like High Commissioner Datuk Seri Zakaria Sulong to tell everyone the truth about Malaysia’s current treatment of Sarawak and the “petty Penan” and “zoo animals”?

Let’s not sack him, let’s keep interviewing him!