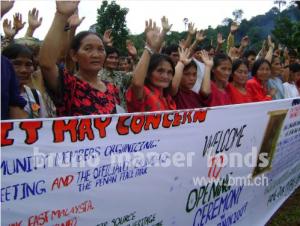 Bruno Manser Fund’s research team have done the world another favour.  They have conducted a careful and painstaking analysis of the leaked Land & Survey Department information that we first revealed on line here on Sarawak Report [click for land grab map and data].

From the BMF report we can now see clearly, in black and white, the extraordinary extent of the theft carried out by the Chief Minister and his family of Sarawak’s native and state-owned lands.

In the name of ‘development’ Taib has filched an area three times the size of Singapore for himself and close family members.  Indeed, the Chief Minister, who claims he ‘does no business in Sarawak’ is himself an owner of the company which has received most of all in terms of land, Delta Padi [see our previous expose].

Just as outrageous is the fact that these handouts by the Chief Minister to himself and his family were made either for free or for a ridiculously low cost.  According to BMF, 50% of the land handed to Taib family companies were given out for free under the guise of “payment in kind”!

This means the poor people of Sarawak did not even get a proper premium for the land that has been taken from them, which could have at least paid for some compensation or basic amenities for the state.

What kind of government carries out this sort of theft against it people? 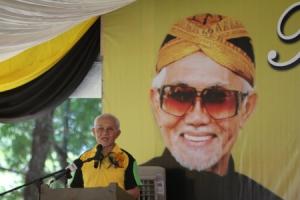 Leadership cult - Who is Taib that he wants to take everything?

Taib Mahmud runs what is known as a kleptocracy, from the old Greek word ‘klepto’, which means I steal.

Taib is himself a kleptocrat, which means that his primary motive, from the moment he gets up in the morning till he goes to bed in the evening, is to abuse his power to grab as much as he possibly can from the people who have placed their trust in him.

Sarawak has given a thief all the keys to the nation’s wealth and he has been stealing from them ever since!

The headline figures of the BMF report are that 200,000 hectares of native lands have been handed out to 31 Taib related companies over recent years to chop down and turn into oil palm.  Altogether these companies have paid a mere RM100million in premiums for that land, a fraction of its worth in terms of timber and palm oil production.

Take Taib’s brother Onn’s recent advertisement for his own Achi Jaya plantation lands for example.  He has been asking RM31million per acre, which makes a price of RM77million per hectare.  This would place a worth on the 200,000 hectares grabbed by Taib at an eventual RM15.4 billion!

Compare that figure to the miserable RM3.47 million that Taib’s BN state government just announced was all it could afford to allocate this year to alleviate hard-core rural poverty!

Consider what Sarawak could do with RM15.4billion to help the impoverished communities of the interior. What a mistake to allow such wealth to pass through the hands of greedy old Abdul Taib Mahmud! 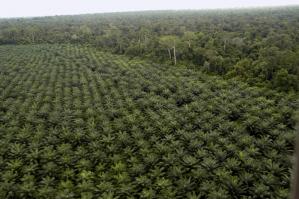 Once again this is new information that has prompted yet another call to Malaysia’s Anti-Corruption Commission.

BMF in its latest press release reminds that it was only last month that the NGO presented another key dossier on the Chief Minister to the same authority, showing how Taib’s closest family members have stakes in 332 Malaysian and 85 foreign companies.  The net worth of just 14 of those companies adds up to US$1.4billion (around RM4.5billion).

Just one last statistic – Taib’s salary is around RM20,000 a month!