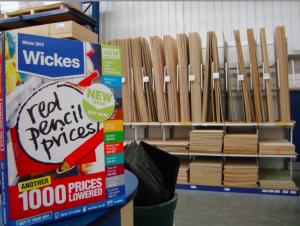 Two of Britain’s top chain stores have been caught out deceiving their customers over ‘eco-friendly’ wood by our latest Sarawak expose, which has also been taken up by the leading UK paper, the Daily Mail.

We can demonstrate that B & Q and Wickes, which both specialise in selling building and decorating materials, have been knowingly selling wood from Sarawak, falsely labelled as responsibly sourced.

In fact, the accreditation agency, the Forest Stewardship Council (FSC), has not certified any Sarawak timber, because of the greedy and unsustainable nature of the logging promoted by Chief Minister Taib Mahmud and his business cronies.

The chain stores, which have hundreds of UK outlets between them and are leading brand names, now face potential prosecution under Britiain’s consumer laws for misleading their customers. 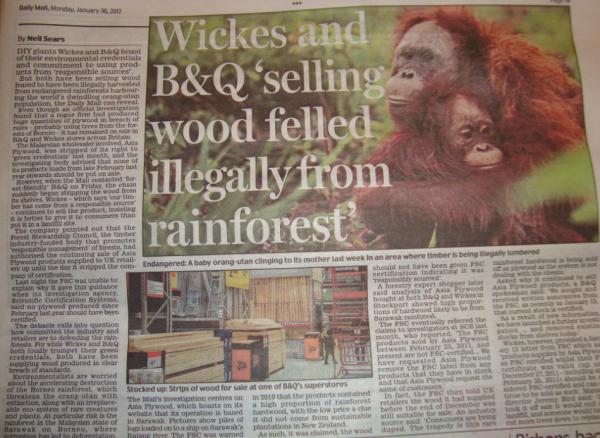 How the story was told in the UK

The Daily Mail explains to its readers:

“Environmentalists are particularly worried about the accelerating destruction of the Borneo rainforest, which threatens the orang-utan with extinction, along with an irreplaceable eco-system of rare creatures and plants.

At particular risk is the rainforest in the Malaysian state of Sarawak on the island of Borneo, where corruption has in recent decades led to deforestation”. 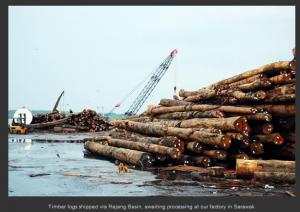 Asia plywood proudly announces on its website that it is the largest exporter of Meranti wood from Sarawak and specialises in top quality tropical plywood! This is its photograph of logs being loaded on the Rajang River

The cheats behind the scandal is a Malaysian company called Asia Plywood Company, which openly advertises as the largest exporter of Meranti wood and tropical plywood in Malaysia.

The company boasts a large sawmill in Tanjung Manis, which it rents from the company Tegas Kesuma, from where it is believed to be exporting 10,000 cubic metres of timber each month to its headquarters in Kedah.

Despite this, the company managed to get FSC accreditation last year by pledging that at least 70% of the content of its finished plywood was now being sourced from New Zealand plantation pine. 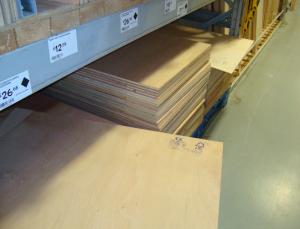 The UK supplier Finnforest has imported tons of this material into Britain (around a quarter of the output), offering it at well below the normal market price for genuine sustainable plywood.

The boards are all stamped with the Asia Plywood Company brand name, alongside the FSC logo and certification.  They also all bear stickers claiming it is “wood from responsible sources”.

Consumers in the UK and elsewhere rely on certification by the FSC (the most respected authority) to reassure them that they are not doing damage to the environment, which is why the stores are so keen to be able to display that their wood is eco-friendly. 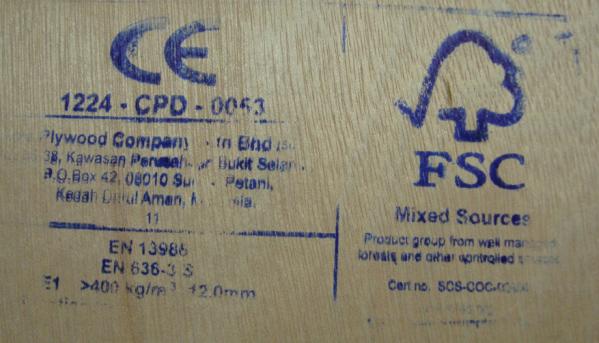 This is the stamp of approval from the FSC, bearing the logo of Asia Plywood and the company's HQ address in Kedah

B&Q and Wickes snapped it up, leaving genuine FSC products struggling to find an outlet.  However, the low prices of this supposedly sustainable plywood caused suspicion amongst timber experts, who knew that genuine plantation pine costs far more to produce. 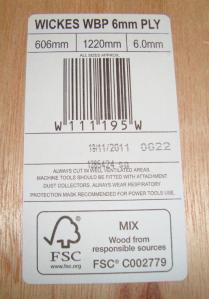 Keeping consumers happy - these labels were still stuck on the plywood in both Wickes and B&Q long after the stores knew they were actually misleading.

Their inspections immediately revealed that the plywood was in fact almost completely made up of tropical hardwood, such as meranti wood – exactly the material which is being exported in such large quantities by Asia Plywood Company from Tanjung Manis.

Sadly, this fast disappearing Sarawak hardwood, which should be worth much more than pine, is being sold off cheap because of Taib’s policies.

His licences permitting rampant logging mean that Europe and America no longer want to buy Sarawak wood, because of the rainforest destruction.  Yet, his crony timber barons are cutting them anyway and selling them off cheap to cheats like Asia Plywood.

According to our information, the timber experts alerted the FSC to the situation towards the end of last year.  The authority immediately suspended Asia Plywood’s licence and conducted an investigation. On 6th January the FSC’s investigation agency, Scientific Certification Systems(SCS), concluded:

“Our investigation found that the FSC products sold by Asia Plywood between February 25th, 2011 and present are not FSC certified and should not carry the FSC label or any marks that indicate that the material is certified. 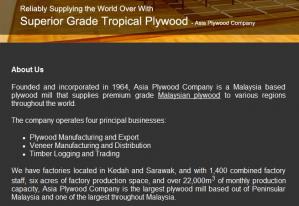 The FSC also confirmed it had removed its accreditation from the cheating outfit, Asia Plywood Company, meaning that the company can no longer brand its wood with their logo.

However, it was at this point that the two UK stores and the FSC also acted in a way that many would also find culpable.

The stores decided not to remove the labels as requested and the FSC failed to take any steps to make them, despite concerns that customers were therefore being mislead. 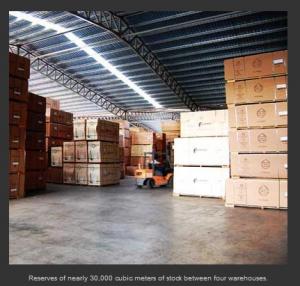 Their later excuse was that the FSC legal department had concluded that because the wood had been believed to be eco-friendly at the time it was bought by the stores, they could continue to sell it to customers under that label.  This was despite the fact that the stores now knew that claim was false!

That decision by the FSC raises serious questions about the integrity of the accreditation agency and also its legal judgement.

How could it be ruled that because B&Q and Wickes had been conned they could legitimately pass on that con to their customers and sell the wood under false pretences? Also, did the fact that B&Q acted as one of the key ‘partners’ in setting up the FSC result in the authority’s dubiously lenient stance on this matter?

Until the day the stores were challenged by the Daily Mail and Sarawak Report both Wickes and B&Q continued to promote the wood as a sustainable product to their unwitting customers, instead of peeling of the sticky labels that claimed the plywood came from “Responsible Sources”! 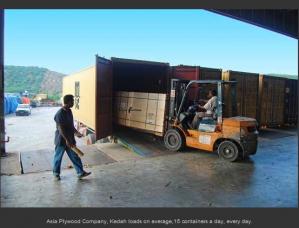 The reason why the stores did not want to peel off the labels seems clear.  Most responsible buyers in the UK take care to only buy products that have been labelled by the FSC, because they do not want to encourage the wanton destruction of rain forests like the Borneo jungle by ruthless and greedy individuals like Taib Mahmud.

Likewise, stores like B&Q and Wickes take great pride in advertising that nearly all their products are certified as being sustainably sourced.  Indeed Kingfisher, the owners of B&Q have won a number of recent awards in recognition of its responsible approach to the environment.  The company boasts:

“Our businesses sell a high volume of timber and products made from or containing wood. Therefore the choices we take regarding which wood products to stock can help protect the world’s forest resources while reducing our impact on climate change. B&Q UK was one of the pioneers of responsible timber sourcing, helping to set up the Forest Stewardship Council (FSC) in the early 1990s…

The reported volume of timber sold in our stores that comes from proven well-managed forests or recycled sources reached 81% in 2010/11 – up from 77% the previous year and ahead of our target of 75%.”  [Kingfisher’s Corporate Responsibility webpage]

By removing the FSC sustainability logos from the Sarawak sourced plywood, therefore, B&Q not only faced putting off customers, but would also have been forced to admit that a lower percentage of its products are sustainable! 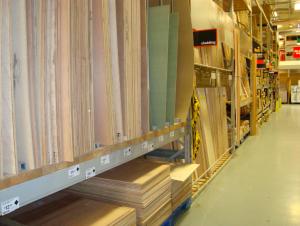 Still on sale until yesterday's story!

Once the stores were faced with exposure they immediately moved to defend themselves.  B&Q within hours began to strip the wood from their shelves, claiming that after they were called by the Daily Mail “new evidence had come to light”!

Wickes on the other hand tried to claim that it was better to continue to sell the wood, rather than waste it by destroying it!

“Its better to use the dodgy wood than throw it” [Jeremy Bird, MD Wickes]

What the Managing Director of Wickes failed to explain, however, was why it was necessary to continue to lie about the wood in order to sell it.  Why not peel off the labels claiming it was sustainable? 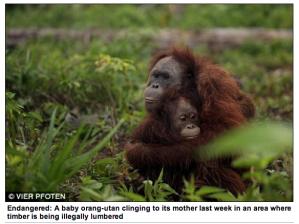 The question now is whether Britain’s trading standards authorities are likely to agree with the strange legal advice from the FSC and the decision by the stores to misrepresent their product?

Once again it seems, the corruption boiling in Sarawak has broken out to compromise others elsewhere.

But, at least attention In Britain has now been drawn to the scandal of Asia Plywood and to the extent of Sarawak’s deforestation.  Action should now be taken to prevent Taib’s timber cronies from selling more of the state’s diminishing hardwoods to the UK under the guise of eco-friendly labels.