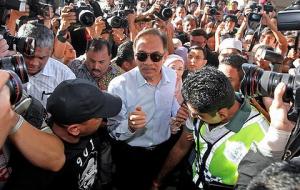 Walking free – Najib backed down and called off judicial persecuion

So, the New Year has seen yet another legal climbdown by BN!

First it was Taib, now it has been Najib’s turn to bottle out of a court case which should never have been brought.

The victim, Anwar Ibrahim, was genuinely surprised at the last minute decision to acquit him after three years of dogged legal persecution.

However, it turns out that even BN had started to foresee the dreadful consequences of putting the popular opposition leader in jail on charges of being gay!

A campaign was already getting underway in the UK, for example, to oppose the planned royal visit to Malaysia by William and Kate, should Anwar be locked up.  Letters had arrived at the Palace before Christmas.

That issue alone had the potential for global publicity and massive embarrassment.   It  would have horribly highlighted Malaysia’s harsh and outdated attitudes towards homosexuality, as well as the corruption of judicial independence, along with so much else. 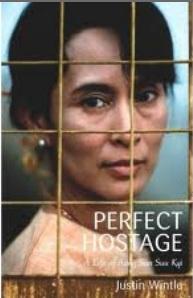 Warning from Burma – did Malaysia want a high profile prisoner showing them up?

‘Cool Najib’ would certainly have been exposed as the square old dictator he actually is!

So no wonder all those foreign PR advisers that he favours were undoubtedly lining up to say “No! no! no!”.

Anything had to be better than creating Malaysia’s own version of Aung Sang Suu Kyi, to become a standing emblem of the country’s shameful oppression.

Najib should have realised this trap of his own making from the start.

Faced wih the climbdown, BN’s PR machine has gone into action  to contain this embarrassing reversal.  Their ‘spin’ has been that the acquittal ‘proves the independence of the judiciary in Malaysia after all’ and shows what a reforming and liberalising fellow Najib is!

But, consider how BN are betraying themselves by such arguments.

Firstly, they are acknowledging how dearly they would have liked to have seen their political opponent jailed for sodomy and that they were doing their best to get him banged up.  Not pretty.

Secondly, they seem to think it can be advertised as some sort of triumph that a judge has not bowed to such disgusting pressure.  What better way to draw attention to the very real concerns in Malaysia about the political interference in the independence of the judiciary?

What we all know, of course, is that Anwar’s acquittal was not a sign of the independence of the judiciary, which has been relentlessly pursuing this case at the government’s behest for the past 3 years, even though it should have been dropped at the very outset.

Rather it is a sign of Najib’s growing weakness and appalling misjudgement in bringing the prosecution in the first place – a mistake that he realised far too painfully late.

It was Najib who called off the judge.  Until that moment the courts had done his bidding by stacking all the odds against an acquittal and defying normal procedures, as the whole world knows. 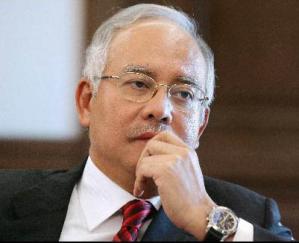 Poor judgement to attack Anwar in this way – maybe he fears a genuine contest?

Which brings us all to the key burning questions that still surround Najib’s own conduct in this affair.

The evidence in this case shows that a) Najib was closely involved in the decision by Mohd Saiful to make his allegations against Anwar and b) Najib did not tell the truth about that involvement (at least to begin with), because he changed his story a number of times as evidence of his contacts with Saiful started to emerge.

So, we have a PM who was forced to admit that his original statements were not true!  He changed his evidence, not once but twice!  Surely, this is scandalous, even for a BN leader?

A useful summary of the case has been provided by Australian barrister Mark Trowell, who concludes that the evidence against Anwar was always so weak it should never have come to trial.  His record of events shows that Najib originally claimed publicly that he had never met Mohd Saiful and had had nothing to do with the bringing of the case.

When however, a photograph was produced showing Saiful in Najib’s own office, the then Deputy PM acknowledged he had in fact met with the young man, but claimed that it was only to advise him on his student grant !  (this is not something Deputy PMs very often do for bog standard students, who they don’t know).

In this second version of events Najib continued to claim there had been no mention of the issue about Anwar. 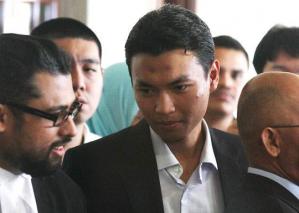 Changing stories, but no evidence. Saiful wants an appeal

But, just three days later Najib was forced to change his story again!  This time he admitted that Saiful had actually come to his own residence just days before making the allegations against Anwar and had indeed told him about the accusations of abuse that he subsequently made to the police.

Yet, even in this third version of events, Najib still maintained that he gave Saiful no advice to pursue the case or go to the police!

One has to wonder what Najib did advise young Saiful to do then?  Because it then further emerged that shortly after, the day before the alleged incident took place, the young man had a secret meeting with the Senior Assistant Commissioner of Police, Rodwan Mohd Yusof, in a room at the Concord Hotel in KL!

Such high-level attention for such a lowly guy…. and all in advance of the alleged incident!  This, of course, was the same Rodwan Mohd Yusuf, who had played a key role in the earlier discredited investigation against Anwar.  What a failure he must feel !  Two attempts to pin the same charge and both eventually shown to have no credibility.

Yet, no one should under-estimate the pernicious effects on the political target of this bungled villification. Anwar spent 5 years being tortured in jail because of the first prosecution and now for the past 3 years has been harried and distracted from his political duties by this latest relentless and distasteful court case.

Time for a new investigation and trial?

So what of the questions still hovering over Najib?  Given that the Prime Minister has himself finally admitted to giving two misleading statements, which might have seriously perverted the course of justice against Anwar Ibrahim, surely it is now Najib who should be facing an investigation into whether he entered into a conspiracy to defame and imprison his political opponent?

Since the evidence is so glaring and so much of it has been supplied by Najib himself, it would be a complete negligence by the forces of law and order if they failed to launch a thorough examination of the whole affair.

Now, that would be the genuine test of how objective the police force and judiciary of Malaysia are!