Suspicious Secrecy From the Swiss! 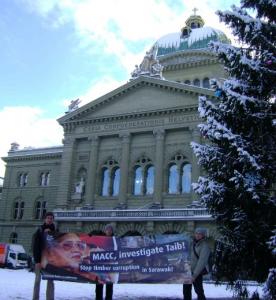 Snowy silence from the Swiss won’t shut up the corruption campaigners!

Taib did not get the response that he wanted from the Swiss Government yesterday.  But he did buy some time.

In answer to questions from MP Maya Graf in the Bern Federal Parliament, the Swiss Finance Minister, Evelyn Widmer Schlum, fell back on traditional Swiss secrecy!

The country’s financial regulators FINMA would not be able to publicise the findings from their investigations into Taib’s assets, Widmer-Schlumpf explained, owing to Swiss confidentiality laws.

She announced that FINMA has “no possibility, nor the right“ to disclose any information on its findings to the public. Rather, it “will inform the directly affected persons only“ on the results of its investigations.

Those interested parties are, presumably, Taib himself and the Malaysian Government.  But what about the people of Sarawak, who have lost billions in revenue owing to the Chief Minister’s handouts of public property, concessions and contracts to his own companies and to his family?

Still on the hook! 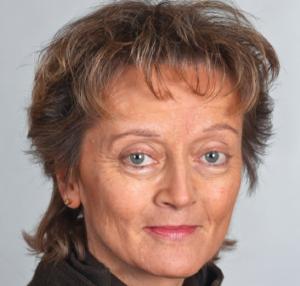 While this cryptic response has infuriated campaigners, who had been given to understand that Switzerland’s new drive for more openess in its banking system would bring swift and clear answers, it has done little to help Taib.

The reply that would have benefitted the Chief Minister, of course, would have been a straight confirmation of his own declaration earlier in the year, after the investigation was announced, that he had no assets in Switzerland at all!

Indeed, Sarawak’s billionaire politician had laid his reputation on the line by standing up in his own state assembly and announcing:

“Let me state categorically that I have no secret Swiss bank account, nor assets or investments of any description. None whatsoever”.[Taib Mahmud statement]

The Swiss Finance Minister has refused to corroborate this statement.  Instead her reply seems to give the strong impression that there ARE interested parties who need to be informed of the results of this investigation!

How long are his secrets safe? 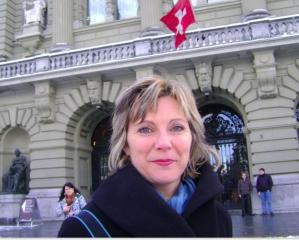 Campaigners are hardly going to allow the situation to rest there.  The Swiss, who have been trying to wipe clean their reputation as a country that made itself rich off the back of Nazi gold and the ill-gotten gains of the world’s worst dictators, are in the middle of a national argument over ending its obsessive banking secrecy.

The Finance Ministry may be on the side of conservatism, however the former President Micheline Calmy-Rey, who ordered the enquiry, made clear that she was in favour of openess  and yesterday the Green MP Maya Graf said:

“I am disappointed that the Swiss government is hiding behind the Swiss banking secrecy and thus helps promote corruption in countries with weak governments.  There is no point in complaining about the destruction of the world’s tropical rainforests as long as Western countries assist corrupt families like the Taibs enrich themselves by cutting down the forests.”

It is not the sort of endorsement that Taib would have wished for from Switzerland and it is a clear sign that the story is by no means finished as campaigners step up their noise on this matter.  The Sarawak-focused Bruno Manser Fund demanded:

“How can it be that our authorities will inform a corrupt potentate but not the public on the findings of their investigations?“[BMF press release]

Taib will know that the longer an issue is bottled up, the bigger the bang when it is finally un-corked!

So what about Monaco? 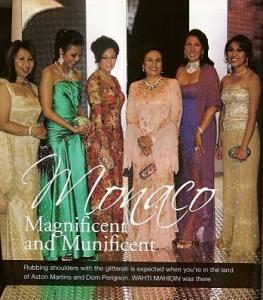 Of course, the speculation has been that it is likely that Taib has already removed his assets from Switzerland.  The tightening of banking laws and moves towards better scrutiny of criminal customers has caused the flight of a great number of rich clients, who no longer feel so secure from investigation, despite the stand that was taken by the Finance Minister yesterday.

Many felt that Taib’s comments in the Assembly were carefully worded, in that he denied having assets in Switzerland now, but not in the past.

Indeed, those close to the Chief Minister have remarked that his trips ‘to see his Swiss dentist’ have dropped off markedly in recent years and that he currently appears to favour more detours to Monaco!

Likewise, Prince Albert’s tax-haven has become a popular haunt for Taib family members in recent years and it is a place where they are happy to put their flashy couture on full display.

Prince Albert’s Foundation (which supports the environment!) has also become a major beneficiary of Taib’s largesse, including a fat 100,000 euro cheque presented at the Islamic Fashion Show in Monaco last year and an expenses paid tour to Mulu National Park for the Prince and his entourage. 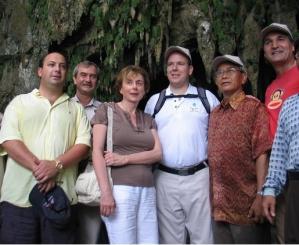 It is worth noting that a prominent member of that Mulu entourage, Achilleas Kallakis, then on the Board of Albert’s Foundation, is now on trial in the UK, charged with conducting Britain’s largest ever mortgage fraud, involving the purchase of properties to the value of £850 million (RM 5 billion).

Interestingly, the trial has currently been put on hold while some 8,000 new papers are considered.  These papers have just been released by the Swiss authorities and relate to Kallakis’s alleged collaborator, a Swiss lawyer called Michael Becker.

Kallakis has previously acknowledged that the wealth behind his investments was not in fact his own, but came from a ‘family trust’, based in Switzerland.  Once again Swiss secrecy laws seem to have been actively used in an attempt to protect the identity of the owner of those millions that Kallakis was investing in his property empire.  However, in this case the authorities have clearly come round.

It means that the full story may eventually come out in London’s Southwark Crown Court when the case re-opens in January.  With the Swiss documents placed before the court we might finally get to hear more details of how this enormous property fraud developed, involving the company Atlas Management, which was originally set up in London by a Malaysian National, one ‘Mr Azlina Goh Abdullah’ (a man with a woman’s name).  It was later taken over by Kallakis and alleged co-conspirator, Alexander Williams, while keeping its headquarters at the same address.

Depending on the extent of the transparency allowed in the release of the Swiss papers, we might even learn which family trust Kallakis was investing on behalf of, during those years when he was dazzling Europe with his flamboyant apparent wealth and even found his name near the top of the UK’s Sunday Times Rich List.

The family who sponsored Kallakis, at least, may well be wishing they had not hidden their money in Switzerland after all.