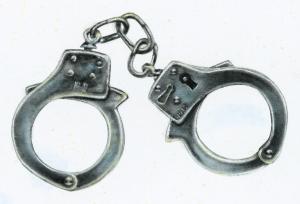 In a dramatic move, a group of NGOs have today called on the Malaysian Attorney General and the Commissioner of Police to arrest Abdul Taib Mahmud!

A letter drawn up by the Bruno Manser Fund and signed by a number of Malaysian and international NGOs, including Greenpeace, requests “the immediate arrest and criminal prosecution” of Taib, along with 13 family members, whom it names as “co-conspirators in the illegal appropriation of public funds”.

The demand represents the culmination of evidence against the Chief Minister, who is now internationally recognised as one of the world’s most corrupted leaders and as being personally responsible for much of the destruction of the Borneo jungle.  [For full text visit stop-timber-corruption.org]

The letter makes clear that so much evidence about the corruption of Taib and his family members is now publicly available that it is no longer acceptable to leave the matter with the Malaysian Anti-Corruption Commission (MACC), which announced an investigation into the Chief Minister last year.

“We firmly believe that it is not enough for the MACC to announce a public investigation and immediate police action should be taken. Ample evidence of Mr Taib’s and his co-conspirators’ offenses is available, and the above-mentioned suspects might use their remaining time in freedom to destroy evidence, to intimidate possible witnesses and to transfer their substantial illicit assets out of the country” 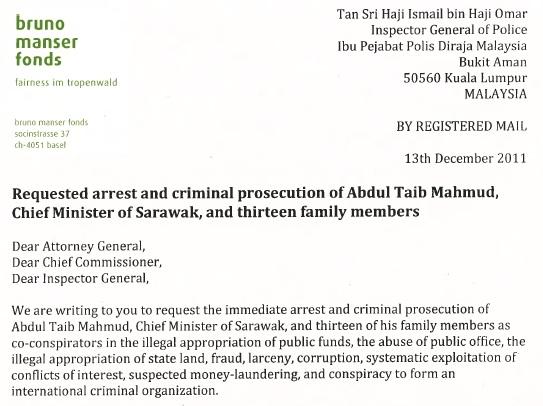 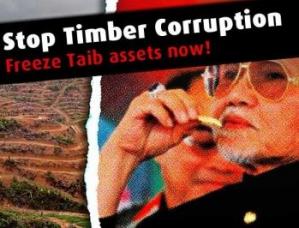 Are times are coming to a close for corrupt dictators?

The letter, backed as it is by a mountain of evidence that has been compiled and made public over the past year, places the Malaysian government in an awkward position.

As a party to the UN Convention on Corruption, Malaysia is committed to combating corruption and to assist investigations by external authorities.  Taib is being investigated in Germany, Switzerland, the UK and Canada.

The letter points out that the evidence against Taib is clearly available by virtue of the enormous wealth he has accumulated, along with his family members, during his 30 years in office.  They point to the Taibs’ stake in over 400 companies in 25 countries and to the $1.5 billion asset value of just 14 of those companies.

Backed by NGOs from Malaysia, Australia, The UK, Germany and Japan, the letter claims such wealth could only have been accumulated by a holder of public office “by a systematic breach of the law and the use of illegal methods”.

The letter does not spare Taib’s mass of wealthy siblings and his four children, who it points out are now adult and able to distinguish criminal behaviour.  It lists the family members who have benefited from Taib’s hand-outs of state owned and native customary lands, as well as public contracts and timber concessions.  They include his siblings, his children and also his top business confidant, cousin Hamed Sepawi.

The letter singles out the Taib family’s control of Sarawak’s largest company Cahya Mata Sarawak (CMS) and also Achi Jaya, the company which Taib handed a monopoly over timber export licences, which is owned by his brother Onn Mahmud.  One other company Ta Ann, which is controlled and largely owned by Taib’s cousin, Hamed Sepawi, has received over 362,439 hectares of logging concessions and 313,078 hectares of plantation concessions from the Chief Minister.

The letter backs its allegations with figures and tables and even helpfully provides the names addresses and ID numbers of Taib and his family members in order to assist in their arrest!

Taib family gathering - how come they are all so very rich?