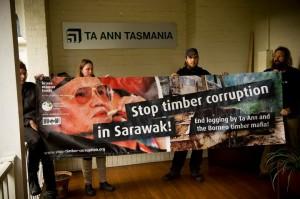 Corruption in Sarawak has become a live issue in Tasmania

The leader of the Australian Green Party, Senator Bob Brown, has invited the Editor of Sarawak Report to Hobart, in order to speak about corruption in Sarawak this week.

The senator is a representative from Tasmania, where the Taib-linked company Ta Ann is involved in controversial logging operations.

At a press conference this morning reporters were given copies of a recent letter sent to the Australian Prime Minister Julia Gillard, asking for Taib family assets to be frozen in Australia and for a money laundering investigation.

“We are very concerned that the Taib family might have laundered and reinvested large corruption proceeds in Australia, namely through Taib’s brother, Onn Mahmud, his Australian-born brother-in-law, Robert Geneid, and his cousin, Abdul Hamed Sepawi, who is married to an Australian national and is living in Australia” the letter reads.

“…..We are thus formally asking the Australian government to launch an investigation into the activities of the Malaysian potentate Abdul Taib Mahmud, as well as his family members and associates, in Australia and to freeze all Taib assets in Australia for later restitution to the people of Sarawak”

The letter was signed by PKR leader Baru Bian, the Director of the Bruno Manser Foundation and the Editor of Sarawak Report.

Gillard is yet to respond and this is the first time that the letter, has been made public.   However, the Swiss and German governments have already responded positively to similar requests and have launched money laundering investigations into Taib assets in their jurisdictions. 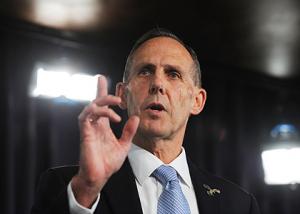 Senator Bob Brown has asked for an investigation

The Editor of Sarawak Report explained to the Australian reporters that there is now clear and concrete evidence of massive abuses of political power in Sarawak, with the Chief Minister using his monopoly over the key offices of State to channel billions of ringgit of public assets into his own private family firms.

When Ta Ann first became established in Australia this situation might not yet have been fully documented, but now the evidence is available Senator Bob Brown urged that there should be an immediate review of the situation and the suitability of Ta Ann as an investor.

The Executive Chairman and largest shareholder of Ta Ann, Hamed Sepawi, is the Chief Minister’s own cousin and a well-known beneficiary of Taib’s largesse.  His companies have received hundreds of thousands of hectares of timber and plantation concessions, as well as numerous state construction contracts, mainly handed to Naim Cendera, another company of which he is Chairman and major shareholder.

All were handed out by the Chief Minister, by-passing any proper tendering process.

“The concern is that Ta Ann’s operations in Tasmania are being funded through the money laundering of illegal profits made in the State of Sarawak” SR told reporters.

Ta Ann Tasmania, a subsidiary of the main company of which Sepawi is a 22% shareholder, has sought to distance itself from the controversies surrounding the land grabs in Sarawak and claims that, since it is not directly involved in logging in Tasmania, its operations should not be targeted.

Instead, Ta Ann relies on wood that is logged on its behalf to produce veneers at its manufacturing plants.

However, Ta Ann Tasmania now needs to show that the resources it has used to set up operations in Australia are not the proceeds from the blatant corruption that has favoured its parent company in Malaysia.