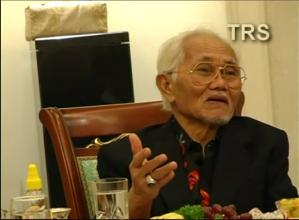 Lying or just forgetful about the odd billion ringgit acquired from business in Sarawak?

Last week, with shocking deceitfulness, Taib Mahmud announced in a video that he and his children have always avoided doing business in Sarawak:

“I don’t want conflict of interests to haunt me all the time.  If I do business inside the country, people will say I use my influence to enrich myself, so we did it outside the country.”

But, haunt him we will for the very reasons he spelt out!   Because, there is a mountain of evidence about the billions of ringgit, which are quite clearly on the record as having been siphoned out by the Mahmud family through their public banking activities alone.  All this business was done in Sarawak and Malaysia.

Taib Banks – how they do benefit from his influence

Take a look at UBG Bank (formerly Bank Utama), which was owned by the Taib family company CMS until November last year.  The Chairman of UBG was none other than Taib’s son, Abu Bekir, and his number two was Taib’s son-in-law (daughter Hanifah’s husband),  Syed Ahmen Alwee Asree. 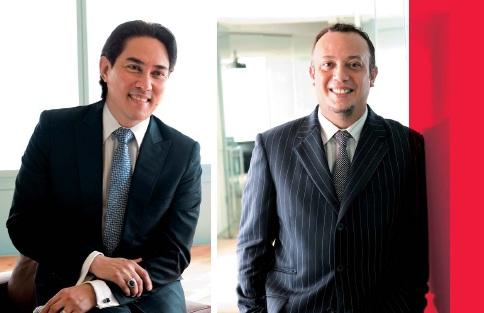 UBG has been making hundreds of millions for these chaps.  Just look at their shareholdings and look what they have just sold them off for. People who accuse Sarawak Report of providing unsubstantiated evidence are clearly people who find themselves unable to freely download basic Annual Reports and Stock Market announcements from the internet.  This makes them either unqualified to comment or liars.

From the records it is clear, for example, that until 2007 UBG, controlled a third of the shares and an over-all 60% stake in Malaysia’s fourth largest bank RHB!   So how much was that worth to the Taib family?  A series of recent public sales have provided all the figures we need to find out.

Cashing in – how much was it worth? 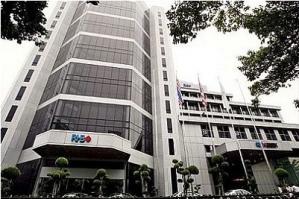 A lot of trees had to come down to buy up a 60% stake in Malaysia’s fourth largest bank!

During 2007 it was known that the Taibs were trying to get their money out of these RHB shares, because three attempted commercial sales fell through in a matter of months.  It was commented that Taib was not getting a high enough bid for his liking!

However, luckily for the Taibs a publicly-run body came in and offered a very good price for the shares after all.  That public body was none other than the Employees Provident Fund (EPF).  This is Malaysia’s largest pension fund for civil servants and it is managed by a Board dominated by politicians and business leaders.

EPF paid UBG and its Taib family shareholders a hefty RM 1.4 billion in cash for that share of RHB.  That was money from the ordinary pensions of public employees into the Taibs’ own bank accounts.

In Taib’s own words such a cosy deal indeed exposes the Chief Minister to “accusations of conflict of interest” and “using his influence to enrich himself” by doing business in Sarawak and Malaysia!

After all,  among those public figures on the Board of EPF is none other than Taib’s own good friend the Sarawak State Secretary, Y.B. Datuk Amar Haji Mohamad Morshidi Abdul Ghani, whom we exposed as a major landgrabber just last week!  Why wouldn’t Mr Ghani return the favour of all those lands given to him by Taib through helping him achieve this very lucrative deal – funded by the pensions of millions of public workers?

In just the same way EPF has rushed to the rescue of the Bakun Dam project.  When no private investor would touch it, EPF ploughed RM5.75 billion into the white elephant, thereby resuscitating the venture and hugely enriching the Taibs’ family firm CMS once more, as a result of the numerous contracts they have acquired on the project.

And Taib claims he does no business in Sarawak or Malaysia and there is no conflict of interest?  What madness!

More money out of UBG

After selling off its RHB shares so profitably UBG was soon benefiting again from all that influence in local circles.  It snapped up two companies Putrajaya Perdana Bhd and Loh & Loh Corp Bhd and then made a private issue of new shares to a single company Majestic Masterpiece that increased the total equity of the company from around RM 800 million to around RM 1.5 billion. 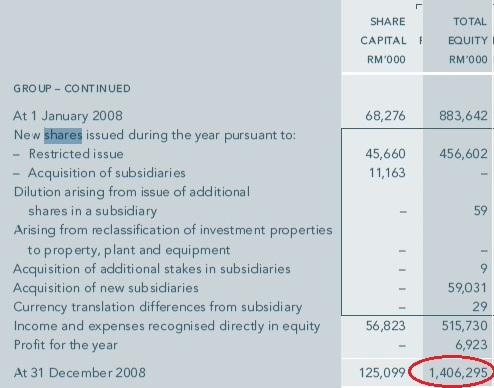 Meanwhile, UBG happily ignored the Stock Market requirements that at least 25% of all the shares of a publicly listed company should be available for public shareholders and not just the controlling companies.  Stock Market announcements in 2010 cited UBG for non-compliance because a whopping 90% of the bank was controlled by CMS and its new colleague Majestic Masterpiece.  Luckily, Bursa Malaysia was willing to grant an extension!

So what of those two companies that UBG took on in 2008?  Well it seems that the State of Sarawak has been very keen to offer them some excellent state contracts in the past few months! 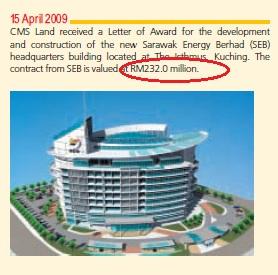 Handed by Taib to his family company CMS, and in turn handed to UBG’s new acquisition Putra Perdana Sdn Bhd, for a fat RM 221 million – all just before the UGB sale..

In early 2010 the Star reported how Loh and Loh, a construction outfit, received one of the first major state contracts in a RM 2 billion road project, awarded by the Chief Minister!  The job was part of the RM 645 million ringgit road to the Murum Dam, which is currently under construction (another white elephant project that will destroy huge areas of Sarawak and enrich the Taibs).

Meanwhile, Putra Perdana, that other construction company acquisition by UBG, was also soon getting awarded fat contracts thanks to decisions by the Chief Minister.  None other than the new Headquarters for the Sarawak Electricity Board (SEB) at Isthmus in Kuching.  This contract was originally awarded by the Chief Minister to his own family’s Cahya Mata Sarawak Bhd’s (CMS) for a handy RM232 million.  CMS in turn handed it on to its own new subsidiary,  Putra Perdana Construction Sdn Bhd, through UBG for RM 221 million.

Two fat multi-million ringgit contracts handed to his own family companies within months of taking them over!  No conflict of interest there?  No sign of doing business ‘within the country’? – how stupid does he think we all are?

During those months of 2010 when Taib was handing out these big contracts to his own subsidiaries he was also actually seeking to cash in the rest of UBG bank.  Negotiations had been underway since at least mid-2009 (according to an announcement in July of that year by Bursa Malaysia) to sell on both the CMS shares in the bank and the new Majestic Masterpiece shares to a new, somewhat mysterious player in the market a company called PetroSaudi Internationa. 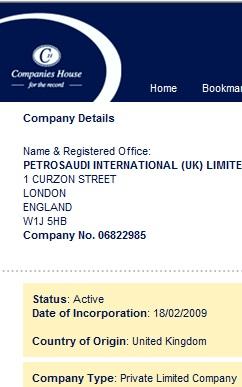 PetroSaudi International was touted as the new Arab-based company interested in buying up the whole of UBG and turning it private.  The company made a bit of a splash in the Malaysian media with various promises of massive investment drives in joint ventures with Government, which all came to nothing during the course of 2010.  PetroSaudi was also said to be linked to Arab Princes and to be based in Saudi Arabia.

However,  the UK’s Companies House records tell a different story.  They state that PetroSaudi International was incorporated as late as 18th February 2009 [corrected] and that the country of origin is the United Kingdom!  There is an office registered in Saudi Arabia and also in Geneva Switzerland, but the origins of the company are about as recent as Abdul Taib Mahmud’s decision to get rid of his billions from UBG in Sarawak and sell the whole enterprise to a company based outside Malaysia.

We researched the London offices of PetroSaudi International at 1 Curzon Street, Mayfair and found them to be occupying a suite of offices in a building that is mainly leased by the Asset Management arm of the Swiss Bank UBS.

With UBG’s new subsidiaries pump-primed with state contracts it can’t have been hard to persuade PetroSaudi International that taking this public bank, already 90% owned by just two concerns (in contravention of Bursa Malaysia regulations), back into private hands would be a profitable proposition.

Just at the end of last year on 1st November 2010 the buy out of CMS’s shares and Majestic Masterpiece’s shares in UBG was completed by PetroSaudi International.  The proposed offer had been announced some months earlier by CMS and amounted to a total of RM 466 million.

Another nice bit of profit – CMS (the Taibs) sell off the remainder of UBG Bank for a total of RM 466 million ringgit. Sale completed just in time for the election!

This amounts to a total of around RM 2 billion ringgit that has been cashed in by the Taibs out of this one banking business over just the past couple of years.  These are sales that have involved the injection of public pension fund money and the use of state contracts to keep the Taib companies healthy earners over the period of sale negotiations.

How can Taib Mahmud stand up and claim that he has done no business in Sarawak in order to avoid being haunted by accusations of conflict of interest ?  It is plain and simple – he HAS used his position of influence to enrich himself.  It is just that he has been preventing all the newspapers from saying it.