WE RELEASE THE LAND GRAB DATA !

Sarawak Report has made the decision to release the full database of the Land and Survey Department’s recent transactions on rural lands.  For some weeks we have been researching the confidential data, only to discover that of the more than one thousand plots of rural land that have been acquired by the state, the vast bulk have been handed on to close relatives or cronies of Taib Mahmud.

This is a national scandal and deserves full exposure.  So, we now invite readers and the press to scrutinise the land register for themselves and to identify what lands have been taken in their own areas – and by whom.  It is time that Taib stopped hiding behind the laughable excuse that “there is no proof”!

The scale of the larceny is shocking.  The total of land titles handed out in recent years, as calculated by the Land and Survey Department’s own figures is a massive 1.5 million hectares.  Much of this has recently involved the acquistion of Native Customary Lands, which has resulted in the recent spate of well over 200 landrights cases currently going through the courts – cases which Taib’s government is losing, emphasing the illegality of his actions.  For this land the State of Sarawak also calculates that it has acquired a mere  RM 734 million in premiums from the lucky people who received the titles. Set this against the current sale by Taib’s brother Onn Mahmud of a mere 30,000 acres (12,000 hectares), for which he is asking just under a billion ringgit!   The profit from the timber cleared from these lands must have alone dwarfed these pathetic premiums. 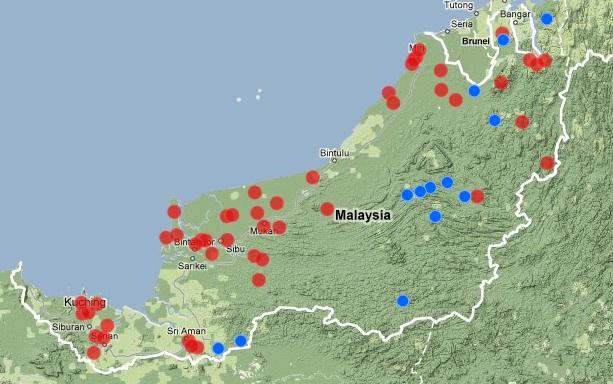 You are also invited to take part in our inter-active mapping project, whereby readers can pinpoint land grabs that are relevant or known to them and add them to our on-line annotated map of Sarawak.

Don’t worry it is easy! We have started it for you by marking out some of the land grabs that we have featured in earlier reports.  You just plot the red blob and add the information.  Shortly after your contribution will be added to the on-line information base for the benefit of fellow readers.  You can click either on the MAP key to see the map or the DATA key to view the full information that we have released.

We have decided to embark on this project, because the information that we are presenting ought to be openly available in any democratic state.  Instead, for the past 30 years Taib Mahmud has presided over a scandalous abuse of his people’s trust, by covertly stealing their lands for himself!  Don’t say there is no proof, just look at the companies in the database and then find out who they belong to, or used to belong to at the time the land title was awarded.  Often these companies were quickly sold on by friends and relatives after receiving the land titles from Taib for millions more than the ‘premium’ he had negotitated with them on behalf of the State he was elected to represent. This means money that should have gone to the people of Sarawak went to the Taibs and their cronies instead.

The Land and Survey Department's own recent totals, showing how many land titles it has 'sold', the total number of hectares and the premium received - a mere RM 730 million for a land mass about 20 times the size of Singapore!

Any procedure involving the alienation of state or NCR lands to private parties, which has happened on a massive scale under Taib, should of course be an open process, so that everyone can see that there has been no corruption and that the best price has been gained for the people of Sarawak.  However, Taib has done no such thing.  As soon as he achieved the position of Chief Minister back in 1981 he moved swiftly to set up what he termed the Land Custody and Development Agency (Pelita) and put himself in charge of it as Chairman and as the Minister of Resources and Planning.  This gave him control over the land.

Just one example - Youthful Elia Abas (daughter of Raziah Geneid and neice of Taib) is handed a 10,000 hectare plantation all to herself!

Within this department he has secretively sequestered lands from native communities and then equally secretively handed them on to whoever he likes – himself, his proxies, his brothers and sisters and nephews and nieces, as well as tranches for political allies and business cronies to keep them obedient to his wishes.  If these transactions had been properly carried out with full transparency these deals could never have happened.  However, Taib just conducted the deals himself behind closed doors!  The term ‘Confidential/CONF’ can be seen all over the Land Registry, because Taib does not want the public to know how cheaply he handed these lands to his family and associates.

The data we are releasing gives details of the lands taken; the companies who took them and the price they paid, along with the dates of the 60 year leases.  This information can be cross-referenced with company information and stock market and sales information that can nowadays be found on the internet.  In this way communities can start to unlock the details of what has happened to their traditional lands.

Till now local people often had no idea that Taib had ‘alienated their land until the logging and plantation companies turned up on their doorsteps, often several years later. Now we invite all the people of Sarawak to check this data and find out if their areas have been already grabbed by one of the world’s richest families or their business associates.

Breakdown of a world class theft

Out of the hundreds of companies which have benefitted from the plunder of Sarawak’s lands we have identified scores already which are owned, or were originally owned by Mahmud family members, before being sold on to a thinly disguised third party owner – usually a crony of Taib.  Below is a list of some of the companies that feature on the Land Register along with the Taib family members they are linked to.  But, with your help, we hope to identify the rest before Taib finally meets his people once more at the polls in just  three weeks’ time: