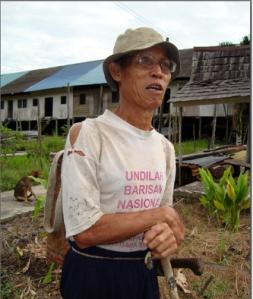 One ragged T-shirt. His only reward for voting BN and in return they took his Native Lands!

Taib Mahmud evidently considers it his personal duty to look after his entire family of brothers, sisters, cousins, in-laws, nieces, nephews and all the rest.  By this he equally clearly thinks he should ensure that each and every one of them should become multi-millionaires, even if it is at the expense of the poverty-stricken Sarawakian people, whom he is employed to represent.

No one in Sarawak should be poor these days, because they are fortunate to be part of a small population living in a country rich in resources.  Yet under BN they have come to accept poverty as their lot and to even be grateful to Taib when he comes by at elections and throws them a little rice or promises them a road they will never get.  Clever Taib.  Sarawakians allow themselves to be the poorest people in Malaysia, even though they have the richest state and all because they vote for him!

We can expose yet another scandal where this greedy Chief Minister has taken the land belonging to the people of Sarawak and then sneaked it into the possession of one of his brothers, so that he can then make millions selling it on at the market price.  Once again the people who traditionally owned that valuable area have been deprived of the chance to both live a comfortable life and to keep their rich and beautiful environment.

In this case the Iban community of Pasai Siong, Sungai Retus went to court after their traditional Native Customary Rights Lands were  discovered to have been ‘alienated’ by the State and passed to a palm plantation company called Masretus Sdn Bhd.  As usual the community had not been informed of the decision regarding their traditional lands, so by the time the case was came to trial the judge dismissed it because it had been brought too late after the event!  This is how justice works in Sarawak.

But of course the identity of the real profiteers from this land theft has never come out.  It was concealed by a quick sale and with just a brief announcement before ownership passed on.  Sarawak Report can now reveal that these original profiteers were Ibrahim Mahmud, brother of the Chief Minister and his sons.  They grabbed the huge plantation area by a familiar method which has often been used by the family of the Chief Minister. 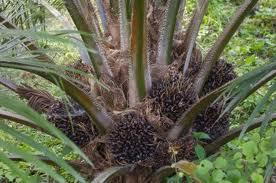 Palm Oil - path to riches for the plantation licence holder

By this method the company which was originally awarded the Land Titles to the Sungai Retus area near Sibu by Chief Minister Abdul Taib Mahmud (also the  Minister of Resources & Planning and Chairman of Pelita, the Land Grab Agency) was Masretus Sdn Bhd.

On 17th February 2009 Masretus quietly  received the titles to four large plots of land in Sungai Retus amounting to  768 hectares for the nominal payment of just over RM500,000.

But within just 6 weeks on 3 April 2009 there was a quick sale.  The major palm plantation company, Tradewinds (M) Berhad, made the following announcement to the Malaysian Stock Exchange:

“The Board of Directors of Tradewinds (M) Berhad wishes to announce that TWS through its wholly-owned subsidiary namely Retus Plantation Sdn Bhd has on 3 April 2009 acquired the entire issued and paid-up share capital of Masretus at a total cash consideration of RM7,208,600.00 (“Acquisition”)”

This represents a turnaround profit of nearly RM 7 million for doing nothing at all.  The same announcement confirms that Masretus was a private company formed in January 2007 and that

“Masretus is currently the registered holder of a provisional lease over all those parcel of land with an aggregate of 768 hectares (1867 acres), situated at Pasai Siong Land District, in Sibu, Sarawak. The principal activity of Masretus is cultivation of oil palm”.

Tradewinds Annual Report 2008. Who received over RM 2 million in "goodwill"?

The lucky benefactors of this more than tenfold leap in the value of the company in just six weeks were of course the shareholders, whose identities are also publicised by the official announcement as being Ibrahim Mahmud, Taib’s own brother and his two sons Yayha and Mahmud and two others. Ibrahim, an ex-policeman with no identifiable palm plantation experience, had thus walked off with a profit of just under RM 7 at the expense of Sarawak’s taxpayers who received only a fraction of the land’s worth. 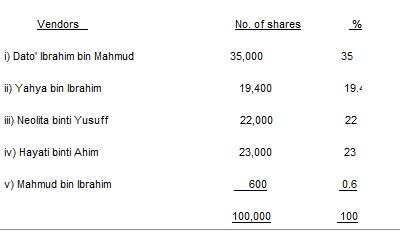 The Tradewinds announcement listed the original shareholders of Masretus. Ibrahim Mahmud, Taib's brother, and his family made millions in one quick turnaround deal that stripped the people of Sungai Retus of all their lands

This failure to get the right price for the land on behalf of the people of Sarawak by whom he is entrusted represents a gross dereliction of duty by the Chief Minister.  The fact that he then handed the land to his own brother is nothing less than grand theft from the nation.  But even more painful and pernicious is the other theft that was carried out against the rightful owners of the land in Pasai Siong.  The Tradewinds announcement acknowledges the Native Customary Land issues in the are of the land title by admitting Masretus is the holder of only a “provisional lease”. 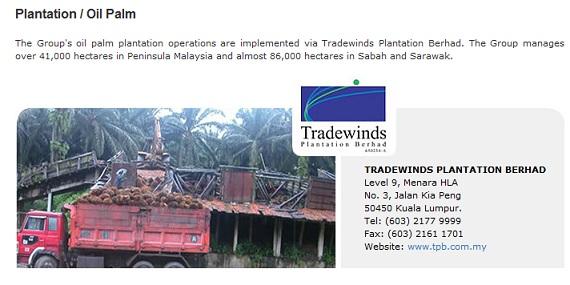 Our business is oil palm

As everyone knows in Sarawak, as did Tradewinds too, such provisional leases are issued by Taib as a way of distancing himself from the brutal land grabs he is sponsoring.  While in Kuching the fiction is maintained that such provisional licences are only conditional on agreement being reached with the poor land owners, out on the ground it is up to the plantation companies and their enforcers to bully, lie and cheat the locals into believing that they have no choice but to surrender their land for a nominal price.

This was what happened in Sungai Retus like everywhere else. 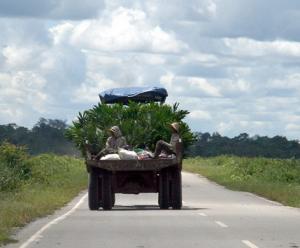 The people of Sungai Retus may not have known that the  people making easy money from their misery and distress was the family of the Chief Minister, but the Directors of Tradewinds most certainly did know the identities of their vendors.  They also knew  of the circumstances of the sale and illegal profit of the Chief Minister and his family.  The Directors of Trandwinds, one of the world’s largest public palm oil companies, just one month after this acquisition joined the supposedly sustainable palm oil organisation the Round Table on Sustainable Palm Oil.  In its membership profile for the RTSPO Tradewinds States that:

This claim is placed under severe strain by the circumstances surrounding the acquisition of Masretus Sdn Bhd.

Time to stop the destruction

For decades Taib has treated his country in this way and robbed his people.  He has operated as if he could hide his thefts and his wealth taken from Sarawak.  He may now have become one of the world’s richest men and his family with him, but as the elections draw closer the truth is catching up with Abdul Taib Mahmud and the people are realising what he has done.