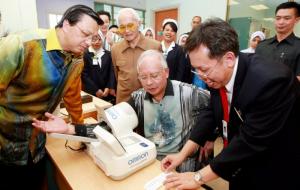 What a relief! Taib finally got Najib to agree to a Federal buy-out of his clinic and got him to open it on January 16th

A series of sickening revelations have started to emerge about Kuching’s newly-opened ‘Heart Hospital’ at Kota Samarahan, following investigations by Sarawak Report.

The Unit, which was opened to a fanfare last week by the Malaysian Prime Minister, has turned out to be the most expensive hospital ever built in Malaysia in terms of the cost per bed.

Even so we have discovered patients are already being turned away from life-saving treatment, because the facilities are inadequate to perform heart operations. Much of the equipment is obsolete and only one ward out of the eight floors of the hospital is even staffed.  This is despite the fact that the project should have been completed in 2006 and is therefore six years late! 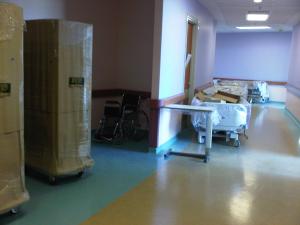 Moth-balled - most of the hospital is not open and the decade old equipment is still unwrapped!

This state of affairs can only cast the most serious questions over the competence of the Deputy Chief Minister and SUPP leader George Chan. He as the Sarawak minister in charge of health originated and managed the project.

His culpability is further deepened by the fact that he granted his own girlfriend, Christina Foo, the multi-million ringgit contract to purchase most of the hospital’s medical equipment.  She set up a company called Trend-Nics, which a raft of insiders acknowledge was handed the lions share of the equipment contracts!

Ms Foo is acknowledged to be pretty and lively and she was Chan’s open mistress for many years during his marriage to his former wife. However, experts and insiders are adamant that not only was there no need for this middle-man contract, but that Ms Foo was not qualified to be involved in such matters.  Therefore there are now serious questions about how much profit Chan’s mistress made on her major share of the RM 130 million contract that was awarded to buy this equipment, much of which has been now found to be inadequate.

There appears to have been an attempt to cover up the involvement of Ms Christina Foo in the Trend-Nics affair and to disguise her Directorship of the company.

Unconvincing cover-up. Trend-Nics is directed by Foo's sister, Florence and another called 'Celine' Foo. It is owned by another company called Chastain

Our investigation of Trend-Nics official documents show that the Directors of the company are in fact registered as two other Ms Foos called Florence and ‘Celine’ .  This camouflage would appear to distance the fetching Christina Foo from the company.  However, the 100% shareholder of Trend-Nics is registered as another company called Chastain Sdn Bhd.  Chastain is 80% owned by Christina Foo herself, who is also registered as a Director at her swanky Kasuma Resort residence.  The other Director, Florence Foo owns 10% and the remaining 10% is owned by ‘Celine’ – who turns out to be represented by Christina Foo herself!

The real owner of Trend-Nics is clearly revealed to be George Chan's girlfriend!

Insiders have told Sarawak Report that they believe Trend-Nics could have made as much as RM40 million from the contract.  If so, Sarawak Report would like to know if any of this enormous sum found its way back to George Chan in order to fuel his inexplicably wealthy life-style and his marriage to an extremely young new wife? 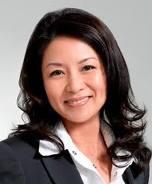 The fetching Ms Foo – but what does Christina know about medical equipment?

The people of Kuching are in desperate need of a new hospital.  Millions of taxpayers money have now been spent on this hugely expensive project. However medical insiders have told our Sarawak Report that with Kota Samarahan the Government has fobbed the people off with a useless White Elephant instead of the General Hospital they need.  They say the new hospital, which was first built as a private cancer facility, is simply not designed to be a public hospital.  It does not fufil the needs of the people and it is inaccessible, miles from Kuching with no bus routes.  Not only this, but there have been so many years of delays that much of the life-saving medical equipment in the hospital is now too old and obsolete!

Sarawak Report has concluded that the reason Kota Samarahan has been opened as a state hospital is to cover up a case of grand theft and failure by BN Ministers.  The project began in 2003 as a venture to open a private hospital to make money from foreign ‘health tourists’.  Chan’s department sponsored the whole project under the title Sarawak International Medical Centre with a budget of RM473 million.

However, costs soon began to rise, not least because Chan and Taib had agreed to pay the contractors in Euros, which rose from 3.2 ringgit to 4.8 ringgit over the period.  this increased the price to RM 660 million, according to insiders.  Eventually, the private health care company partner in the project pulled out of the deal.  It is believed they lost confidence in the face of corrupt practices and incompetence!

White Elephant fobbed back onto public

The solution for Taib and his ministers has been to pressure the Federal Government into buying the hospital off their hands and to open it as a public hospital!  The wrangling and negotiations have taken years, but Taib is said to have demanded the face-saving support from Najib in advance of the up-coming State Election.

Last week the PM obliged by offering what is believed to have been some RM400 million for the hospital – nothing approaching the actual cost to build.

Experts have calculated that the cost to the public of this project now works out at by far the most expensive hospital built in Malaysia in terms of cost per bed.  A normal calculation of costs would be RM1.2 million per working bed.  The original plans for Kota Samarahan was for a 300 bed facility costing RM473 million, which was already expensive at RM1.57 million per bed. 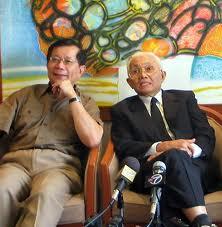 Old timers - Was this about a hospital for the sick or making money out of the people?

However, by the time the project finished 6 years late, the cancer facility had been dropped and so had half the beds, resulting in a 137 bed hospital costing what is estimated to have been at RM 660 million. This works out at RM  4.8 million a bed or nearly five times as much as the average for a public hospital.

Insiders are complaining that if this sort of money had been spent on a proper hospital for the people then they would have had a wonderful health care centre that could have met every medical need – not just a small hospital which only is designed for heart patients!

Useless – The hospital has old equipment and not enough oxygen!

Shockingly, Sarawak Report has now also learnt that even at this enormous price, desperately ill patients are already being turned away from the barely open hospital because it is not equipped to operate on them!   Yet another insider has confided that since the hospital started admitting patients a month ago doctors have been unable to perform surgery because of the cheap and inadequate system that has been installed for providing oxygen.  They told us:

Our investigations have confirmed that  the problems lies with the original contract and construction of the building, which the Sarawak Government failed to monitor.  Despite the enormous cost of the project the state owned Sarawak Specialist Hospital & Medical Centres Sdn Bhd failed to demand a proper Wall Oxygen System to be built in by the contractors.  The contractors were able to argue that they should go for the option of providing oxygen canisters for patients, for a fraction of the cost.  However, doctors have explained that such canisters are totally inadequate to perform heart surgery and do not supply enough oxygen!  It would be now impossible to install a proper oxygen system without tearing down the whole building and starting again! 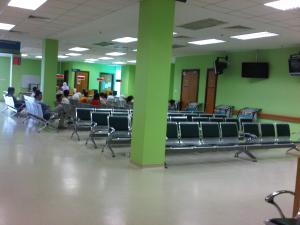 Waiting - but not much treatment on offer!

A disaster of such magnitude cannot begin to be excused on the part of the so-called health expert YB Dr George Chan, who claims to be medically qualified, or indeed the contractors and consultants who managed the project.  However, it seems the BN government is attempting to do just that, since they have wheeled out top surgeons over the past week to praise the hospital that cannot perform operations!

But the lack of oxygen is not the only problem with the hospital.  All the equipment for the project was ordered nearly ten years ago, in expectation of a completion date in 2006.  We photographed equipment and beds still unwrapped in empty corridors, as only Floor 3 of the building is actually being used.  Because the equipment is now so dated, doctors say it is already too old for modern heart surgery and should long ago have been replaced.

Further, much of the equipment no longer meet necessary hygiene recommendations, which have been introduced to protect patients from fatal infections.  Even if doctors were to try to use such equipment they are clearly concerned that the whole range of instruments and scanners and equipment may not be functioning correctly since they have laid in mothballs for so many years!

These and numerous further questions surrounding the equipment and expenditure at Kota Samarahan Heart Hospital have been hidden by ministers.  With so little public accountability and no scrutiny of the contracts and expenditures there are huge question-marks over where the money has actually gone and what proportion went in profit to middle-men like George Chan’s own mistress. 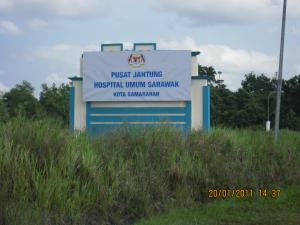 Hasty re-branding - the old sign for the original private hospital the Sarawak International Medical Centre has been shabbily covered up with a new banner advertising a public 'Heart Hospital' instead!

Insiders on the project have told Sarawak Report that they quarrelled with Ms Foo over proposals to purchase cheap beds and label them as expensive cardiac beds – the price difference between the two brands was RM2,400 instead of RM48,000!   One insider even says he was summoned by Sulaiman Taib, son of the Chief Minister and husband of George Chan’s daughter Anisa to explain why he was being ‘difficult’.  Sulaiman allegedly threatened “we can get rid of you immediately” – even though he had no official responsibility for the project.

The full extent of this scandal is still under investigation.  However, it is abundantly clear that the sick people of Sarawak have been robbed and cheated of the proper medical treatment that they have paid this BN Government to provide.

On his visit to Sarawak last week , therefore, the Prime Minister first opened a new hospital in Belaga that has no doctors.  He then opened a new Heart Hospital in Kuching where the doctors cannot perform operations on their patients!  What kind of record is that?